Hollywood Remembers Kirk Douglas, ‘One of the Most Iconic Actors of His Time’ 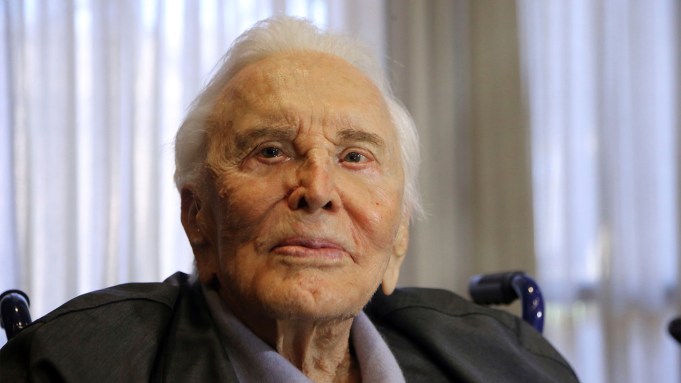 Hollywood paid tribute to Kirk Douglas, one of the enduring figureheads of its Golden Age, following news of the actor’s death on Wednesday.

Director Steven Spielberg was among those who paid tribute to Douglas’ life and work.

“Kirk retained his movie star charisma right to the end of his wonderful life and I’m honored to have been a small part of his last 45 years,” Spielberg said in a statement. “I will miss his handwritten notes, letters and fatherly advice, and his wisdom and courage — even beyond such a breathtaking body of work — are enough to inspire me for the rest of mine.”

Ron Meyer, the vice chairman of NBCUniversal, the studio behind “Spartacus,” also remembered the actor.

“I’ve personally known the Douglas family for over 40 years. Kirk was an extraordinary man, dedicated husband and father, a loving grandfather, and one of the most iconic actors of his time,” he said. “He will always hold a special place in our studio’s history and the hearts of all of us here at Universal.”

KIrk Douglas will always be an icon in the pantheon of Hollywood. He put himself on the line to break the blacklist. My love goes out to my friend Michael and the whole family.

Danny DeVito remembered Douglas as a “Scalawag,” recalling the 1973 pirate film of the same name that Douglas directed and starred in.

Kirk Douglas. The inspirational Scalawag. 103 years on this earth. That’s got a nice ring to it! Great hanging with you man.

Jason Alexander declared Douglas “got better with every passing day.”

Heartbroken. Kirk Douglas was a friend and an absolute legend of a star and human. He got better with every passing day. So honored to have known him. My love to his family. We could use a true Spartacus. #ripkirkdouglas

Bruce Campbell declared Douglas “a pillar of Hollywood has fallen.”

Kirk! A pillar of Hollywood has fallen. Nobody danced on Viking oars like you! Safe travels, stud! https://t.co/FtQDuDLcT6

Mitzi Gaynor, one of Douglas’ former co-stars in the Golden Age of Hollywood, thanked him for “sharing your amazing talent with all of us.”

Bravo Kirk Douglas on an incredible life. Thank you for so generously sharing your amazing talent with all of us. The film we made together will always hold a special place in my heart. My love to Anne & your beautiful family. #KirkDouglas

We lost another one way too young. RIP Kirk Douglas.

Legends never leave us! RIP Kirk Douglas. We grew up watching you. #BePeace

Condolences to the family of Kirk Douglas. What an incredible icon he was in this industry! 😞

I will always be in awe. May your memory forever be a blessing #KirkDouglas https://t.co/9zEWwyUzic

RIP #KirkDouglas – a giant. One of a kind. A life most fully and extraordinarily lived. Sending condolences and love to Michael and family.

Kirk Douglas was a dear friend, a talented actor and a dedicated humanitarian. He was one of a kind
and we will miss him.

Kirk Douglas was one of the biggest stars of all time & a brilliant actor with an unforgettable, blazing charisma. He will also be remembered for putting his career on the line by defying the Hollywood Blacklist, hiring writer Dalton Trumbo for the classic Spartacus. #RIP 💔 pic.twitter.com/snzoHPMtDr

“I wanted to be an actor ever since I was a kid in the second grade. I did a play, and my mother made a black apron, and I played a shoemaker. After the performance, [my father] gave me my first Oscar: an ice cream cone.” -Kirk Douglas

Goodbye to a Hollywood legend. pic.twitter.com/vnu1Hkb2FA