Kevin Costner Honors Sean Connery: ‘He Was the Biggest Star’ 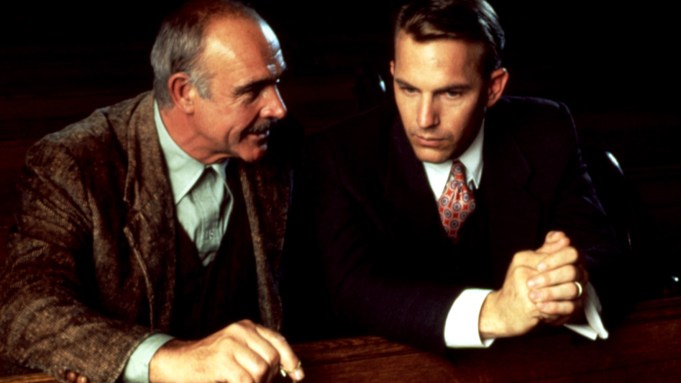 Kevin Costner paid tribute to Sean Connery, his co-star in “The Untouchables,” calling him “a man’s man who had an amazing career.”

Connery died on Friday in his sleep. He was 90 years old. The actor won an Oscar for his role in “The Untouchables” as beat cop Jim Malone, a mentor to Costner’s character Elliot Ness, who teaches the strait-laced American Prohibition agent about doing things “the Chicago way.” The film was a massive hit when it came out in 1987, catapulting Costner to the A-list and helping Connery prove his dramatic chops. In his statement, Costner called Connery “the biggest star that I ever worked with.”

Robert De Niro, who played Al Capone in “The Untouchables,” also honored Connery, saying, “He seemed much younger than 90; I expected – and hoped– he’d be with us much longer.”

Connery was best known for playing James Bond in seven films including such franchise favorites as “Goldfinger,” “Thunderball” and “Dr. No.” But he was much more than 007. He also appeared in such critically acclaimed box office hits as “Time Bandits,” “The Man Who Would Be King,” “The Hunt for Red October” and “Indiana Jones and the Last Crusade.”

“I, like the rest of the world, was deeply saddened to learn of the passing of Sean Connery this morning. Sean was a crafted actor who was enormously proud of his body of work, particularly his work on stage. And although he was a very no-nonsense person, he was incredibly inclusive with me professionally and personally.  He was the biggest star that I ever worked with and I will be forever grateful to be linked with him on film. Sean Connery was a man’s man who had an amazing career.”