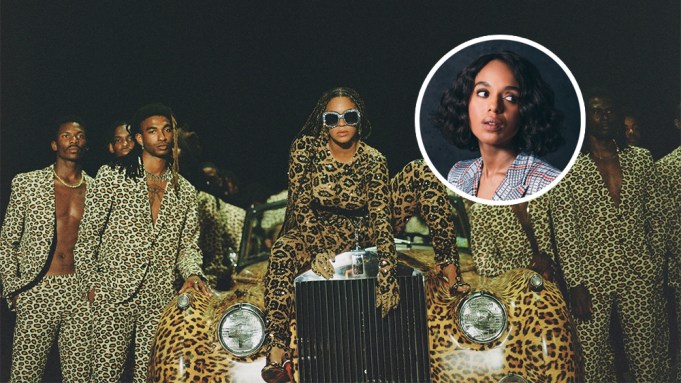 “The Fight” may have been released on Friday, but producer Kerry Washington understands if people are watching Beyoncé’s “Black Is King” first.

“I know what I’ll be watching Friday. I’ll be firmly in the beehive, but [‘The Fight’ is] there,” Washington said Thursday during a taping of an upcoming episode of the Variety and iHeart podcast “The Big Ticket.”

Washington says the two films compliment each other. “We are a wonderful addition to empowerment and the value of humanity,” she said. “And it feels really special to be producing work in a time when our narratives are really speaking to the value of inclusivity and the beauty of all people.”

The “Little Fires Everywhere” star said she’d love to work with Queen B. “I was thinking this morning, because I’ve been doing a lot more directing and I really love directing…I should maybe reach out to her team about directing because she works so beautifully with different directors, collaborating with different directors. So I don’t know if she would have me, but that would be really special.”

Perhaps Washington’s family connections could help get it going. “I’ll go through our parents. Our parents, they get along really well. Tina and Mr. Earl,” she said. “So maybe they can do something.”

“I think what a lot of people have said is that it is at times hard to watch, but it’s so encouraging to know that when you wake up in the morning and you think, I don’t know what to be panicked about today, should I be more stressed out about the attack on women’s reproductive rights or the attack on the LGBTQ community, or the attack on immigrants communities? I mean, you can belong to many of those communities. Or the attack on black bodies and police violence?” Washington said. “There are so many battles to be fighting right now, but I get comfort and so many people have said they get comfort by waking up and knowing that the ACLU is in that fight… You can be confident that the ACLU is on the ground working to protect the rights of all Americans.”

In the end, Washington hopes viewers are inspired to get involved, too. “We may not have gone to law school, you and I, but we have our own gifts and assets that we can bring to the fight,” she said. “Even if it’s baking cupcakes and selling them and sending that money to the ACLU. You can be making phone calls to your legislators. You can be writing letters, you can be posting, you can be marching, you can be voting, you can fill out your census. There’s so much that we can do.”

“The Fight” is in theaters and available on demand.