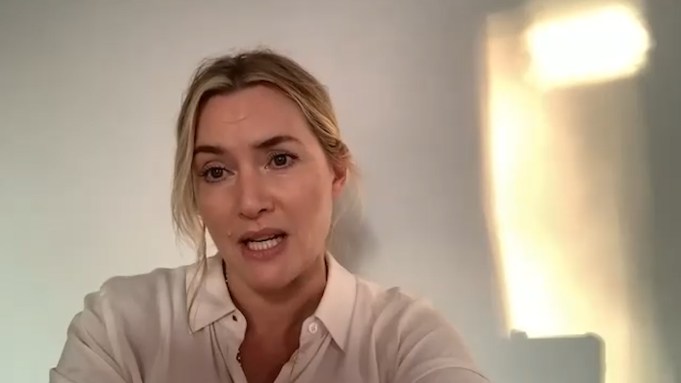 During an interview at Variety’s virtual studio at the Toronto International Film Festival, Kate Winslet — who stars in the festival’s lesbian romance “Ammonite” — elaborated on the regrets she recently expressed about working with directors Woody Allen and Roman Polanski. In an interview with Vanity Fair that published last week, Winslet talked about how the #MeToo movement has influenced her thinking and her choices, and said: “It’s like, what the fuck was I doing working with Woody Allen and Roman Polanski?”

On Monday, Winslet expanded on that sentiment.

“We learn, we grow, we change,” Winslet said. “I think we should all be allowed to say, ‘Look, I shouldn’t have done that,’ you know? And I think this is a huge, seismic time for all of us, where we’re aware of how many planes we take, for example, or things we have done in the past — or would go back and wish to do differently. And I just want to lead with a bit of integrity, and to just be up front and say, ‘You know what? I probably shouldn’t have done that.’ And so what I said in that Vanity Fair piece is really true, you know: I do regret it. I do regret it.”

When asked by Variety whether she could pinpoint what led her to feel that way, Winslet said it was after making 2017’s “Wonder Wheel” with Allen, in which she played an unhappy housewife in 1950s Coney Island.

“To be completely honest, I think as soon as I was doing press for ‘Wonder Wheel,’ it just made me crashingly aware that perhaps I shouldn’t have done this,” Winslet said. “But what was remarkable to me is that these are individuals who have been feted and praised and patted on the back for decades in this industry. And so by and large, it was presented to actors that these were people who it was OK to work with. But now, of course, I feel I can just say ‘I shouldn’t have done.’

“That may well have been the case. But I shouldn’t have done. And so there you go.”

Winslet’s thinking has evolved on the matter. In September 2017, a month before the reckoning around sexual harassment and assault began because of the investigations into Harvey Weinstein, she had defended working with both Allen and Polanski (who directed her in 2011’s “Carnage”).

Speaking with Melena Ryzik at the New York Times, who asked whether the allegations against Allen had given her pause, Winslet said, “Of course one thinks about it. But at the same time, I didn’t know Woody and I don’t know anything about that family. As the actor in the film, you just have to step away and say, I don’t know anything, really, and whether any of it is true or false. Having thought it all through, you put it to one side and just work with the person. Woody Allen is an incredible director. So is Roman Polanski. I had an extraordinary working experience with both of those men, and that’s the truth.”

In Francis Lee’s “Ammonite,” Winslet plays British paleontologist Mary Anning, whose crucial scientific work has largely been erased from history. “Ammonite” is not a biopic, however: Lee, the film’s writer-director, imagines a story in which Mary and Charlotte (Saoirse Ronan) form a relationship after Charlotte’s husband leaves her in Mary’s care. Amid the fossil-rich English coastline of Lyme Regis, the two women fall in love, which changes both of their lives.