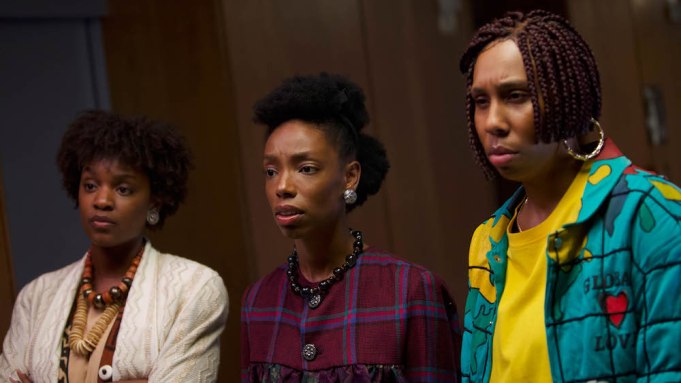 Justin Simien’s Sundance Midnight section opener “Bad Hair” released its first trailer on Thursday, with Hulu also announcing that it will debut on the streaming platform on Oct. 23.

The one-minute teaser introduces an L.A.-based executive assistant, Anna, who gets an intense weave sewn in. She passes out in front of the hairstylist, while the ominous music and dark cinematography hint at the growing suspense.

“Clients wear this stuff as magic,” whispers the hairstylist, Virgie (Laverne Cox), in the trailer. “You know, in some parts in India, women’s hairs are the most prized possession.”

From the “Dear White People” director, the horror satire set in 1989 follows Anna, who fears the worst when her dreadlocked boss is replaced by Zora, a retired supermodel who pressures her to get a weave. Her new hair has a mind of its own and bites back.

Simien intended for his work to spark a conversation on the way society responds to appearance. “I made this movie with one group in mind — Black women,” he said earlier this year, adding that he hoped to “interrogate a system obsessed with Black culture, but one that doesn’t give a s— about Black lives.”

“I didn’t really want to moralize getting a weave or not,” he explained. He instead wanted to question “the system that marginalizes and oppresses Black women.” Simien added that he was inspired to make the film a horror satire after watching a subgenre of films considered “hair horror.” “I wanted to make us something about the system that sort of gives people just one or two choices in order to move ahead. I wanted to take that system to task and I just, I thought it’d be a really fun way to do that.”

Along with Simien, Julia Lebedev, Angel Lopez and Eddie Vaisman produced the film. Executive producers include Leonid Lebedev, Oren Moverman and Alex G. Scott, and the film is produced by Sight Unseen in association with Culture Machine.