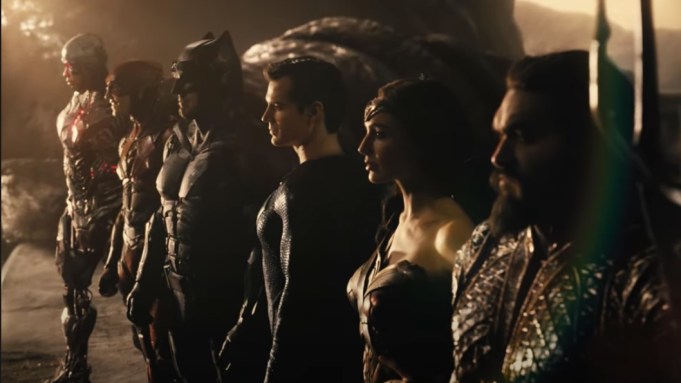 Director Zack Snyder revealed the extended first look at the Snyder Cut of “Justice League” during the DC FanDome virtual convention on Saturday.

Snyder said the film will be released on HBO Max in 2021 in four, one-hour segments, as well as having an option to watch it as an unbroken four-hour movie. He also said there’s work on a “distribution plan” to release the movie outside of the streaming service.

The full teaser is something of a triumph for “Justice League” fans, who all but willed the Snyder Cut into existence. Due to a family tragedy, Snyder stepped away from the production in May 2017, and filmmaker Joss Whedon (“The Avengers,” “Avengers: Age of Ultron”) took over directing duties for extensive additional photography. Fans felt the ultimate theatrical version released in November 2017 compromised Snyder’s original vision, and spent years in a grassroots campaign to #ReleaseTheSnyderCut. This May, they got their wish when Snyder announced he was completing his cut of the film.

The nearly three-minute trailer revealed the most robust look at Snyder’s vision to date. Set to a version of Leonard Cohen’s “Hallelujah,” the teaser shows a darker and more somber tone than the theatrical version, as well as a more up-close look at the apex villain Darkseid, who was not featured in the theatrical version.

During the FanDome panel, Snyder talked at length with two fans who helped to spearhead the #ReleasetheSnyderCut campaign, which Snyder classified as a “movement.”

“It’s been an incredible journey,” Snyder said. “For us, one of the amazing parts is that we were able to interact with and be part of this fan community in an amazing way. It’s changed us and made us really grateful for being able to have this dialogue.”

Since then, Snyder has regularly revealed glimpses at his version of “Justice League.” Just days after officially announcing the Snyder Cut, the filmmaker dropped a first look at the film’s original villain, Darkseid. A few weeks later, Snyder tweeted a clip of Wonder Woman (Gal Gadot) discovering an ancient-looking artifact representing Darkseid. And in July, Snyder appeared during the independent fan convention JusticeCon to debut a brief clip of Superman (Henry Cavill) in his black suit.

Snyder also briefly appeared during another JusticeCon panel for one of the film’s stars, Ray Fisher, after Fisher had talked at length about his allegations that Whedon engaged in unprofessional and abusive behavior on the set of the film and was enabled by producers Geoff Johns and Jon Berg. Earlier this week, Variety confirmed that WarnerMedia has launched an investigation into the production; a source with knowledge at the company said they are not pre-judging Whedon, Johns, and Berg, and the investigation will extend beyond them.

Fisher, who plays Cyborg in the film, also showed up during the DC FanDome panel to ask some fan questions, leading Snyder to reiterate past statements that his cut of “Justice League” places Cyborg at the “heart of the movie,” and that the character “holds the team together in a lot of ways.”

Co-stars Ben Affleck (Batman), Gal Gadot (Wonder Woman), Henry Cavill (Superman) and Ezra Miller (Flash) as well as “Wonder Woman” director Patty Jenkins also appeared during the panel, largely to ask fan questions. Miller, however, asked for himself whether the Snyder Cut will reveal more of his character. Given that the Snyder Cut is four hours long, it is perhaps not surprising that Snyder’s answer was yes, and he also teased that the film would explore the Flash’s ability to “interact with time and space” as well.

The “Justice League” panel is part of the first wave of DC FanDome events unfolding in virtual panels throughout the day, most of them focusing on Warner Bros. upcoming slate of features based on DC Comics properties. A follow-up event largely focusing on TV will be held on Sept. 12.