Continue to Variety SKIP AD
You will be redirected back to your article in seconds
Oct 1, 2020 7:00am PT 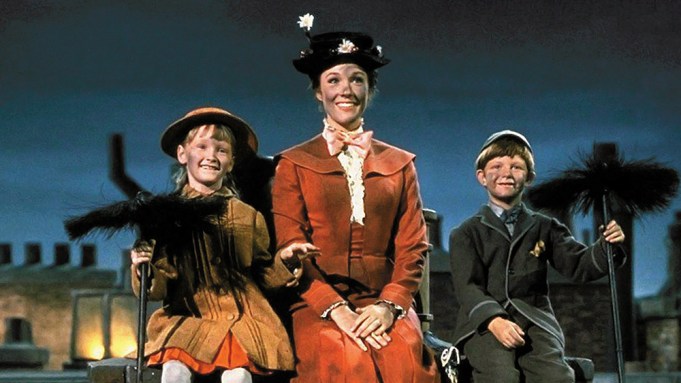 Julie Andrews had a number of things working against her before she became an international superstar in her first movie role in “Mary Poppins.”

Andrews, who turns 85 on Oct. 1, almost had to turn down the role because she was pregnant when it was first offered. But studio chief Walt Disney was wowed by her Broadway performance in “Camelot,” and was willing to wait until after she gave birth to start production. Filming started in mid-1963, when Andrews’ infant daughter Emma was about six months old. Andrews went on to win the Oscar for best actress for her role as the famously eccentric governess.

After starting out in British theater, Andrews had made a splash when she crossed the pond to star in “My Fair Lady” on Broadway when she was just 21. But she wasn’t cast in the film adaptation, since the producers thought her lack of film experience would be an issue. Winning the high-profile singing nanny part must have taken some of the sting out of losing the “My Fair Lady” film role to Audrey Hepburn.

During the Broadway run of “My Fair Lady,” Andrews became even more of a household name in America when she starred in Rodgers and Hammerstein’s televised musical “Cinderella” in 1957. Broadcast in color, a rarity at the time, CBS claimed it pulled in an astounding 107 million viewers — though Trendex counted just one minute of viewing time as a unit, making the high score about as reliable as Netflix ratings.

Variety noted that at a “Mary Poppins” press party “It was clear the girls have mutual respect for each other,” so perhaps Andrews didn’t mind losing “My Fair Lady” to Hepburn. But she did tell the reporter she would have “spat in someone’s eye” if she had been asked to record the songs for the movie version, as Hepburn’s singing was not deemed up to par for the film. The two musical tour de forces ended up competing against each other at the 1964 Oscars, where “My Fair Lady” won eight statues including best picture, actor and director to “Mary Poppins'” five, including best actress for Andrews.

While “My Fair Lady” had plenty of pre-production publicity coming off the Broadway hit musical, the hype for “Mary Poppins” was nearly non-existent — on purpose. Her casting notice was just a tiny story at the bottom of a Variety page. The $6 million budget was Disney’s largest to date, and a risky bet for the studio that hadn’t yet produced many live-action films. “He evidently regards it as close and cherished and when the right time comes he’ll tell about it,” Variety said of Walt Disney’s low-profile approach.

But the risk paid off, and a Variety box office report boldly predicted “Mary Poppins” would “Get more gold than Goldfinger.” It was the top-grossing film of 1964, with around $31 million, and the profits helped finance the construction of Walt Disney World in Florida.

Though reviews met “Mary Poppins” with a dash of skepticism about Disney’s bag of tricks, calling it a “novelty” film, there were widespread raves for Andrews. “Miss Andrews’ first appearance on the screen is a signal triumph and she performs as easily as she sings, displaying a fresh type of beauty nicely adaptable to the color cameras,” wrote Variety.

Even before “Mary Poppins” was released, the producers of “The Sound of Music” had their eye on Andrews for the role of Maria von Trapp, and seeing early cuts of the musical helped solidify their decision. “The Sound of Music” started shooting about a year after “Mary Poppins,” and went on to triumph with a best picture win and an Oscar nomination for Andrews, as well as becoming the sixth-highest grossing film of all time, adjusted for inflation.

After this hard-to-top one-two punch, Andrews went on to star in films including “Thoroughly Modern Millie” and in her husband Blake Edwards’ “Victor/Victoria.” Though she damaged her singing voice while performing onstage in “Victor/Victoria,” she came back into the spotlight with the children of the original “Mary Poppins” fans when she starred as Queen Renaldi in two “The Princess Diaries” movies and voiced Queen Lillian in the “Shrek” movies.

“Hopefully, I brought people a certain joy. That will be a wonderful legacy,” Andrews once said, and it’s safe to say she definitely did.