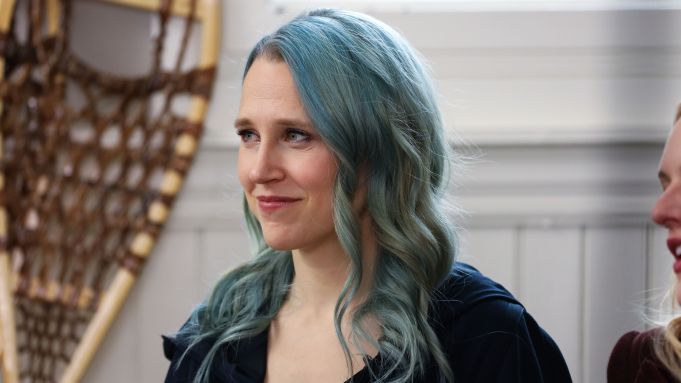 Despite being shut out of most major awards shows this season, women filmmakers will not go gentle into that good night. Instead they’re pushing back even harder, carving out a space for themselves in tentpole productions, petitions to the Directors Guild and with #GiveHerABreak, a campaign aimed at the Academy Awards’ lack of representation.

On the ground at the Sundance Film Festival, director Josephine Decker attempted to normalize the seemingly radical act of being a woman who needs to pump. Between the premiere parties, press rounds and running through the slush in Park City, Utah, new mother Decker found herself in need of a place to pump her milk. Instead of rushing off to the basement or bathroom, as several women at Sundance were wont to do, she used the Variety photo studio. What resulted was a lovely portrait of a woman doing something ordinary, but its existence in a male-dominated industry makes it oddly extraordinary.

“It’s funny because it felt very organic at the time,” the director of “Shirley” explained. “We were running from one press thing to the next and I was thinking, ‘When am I going to pump today? When am I ever going to pump?’ After I started pumping, they needed me back [for press], but I was two minutes into pumping and I needed 20 more.” The dilemma became pump or press for Decker. The stress was difficult until she realized, “‘Wait a second, I’m making a movie about women emancipating themselves in the early 20th century!'” The decision became clear; she’d do both.

Variety spoke to the director of “Shirley” about her decision to attempt to standardize what is already standard among many women worldwide. Although every mother’s reality is different, and some aren’t able to or choose not to breast feed or pump milk, Decker thinks it’s important for women to have the choice to, and not be deterred by their jobs.

It was pretty amazing that you wanted to release this image. Why do you want people to see this?

I’ve been in touch with so many other friends who were at Sundance pumping. We’ve been sending each other photos from the basement of this brewery, or “here I am in a tiny bathroom.” It’s out of sight, out of mind, until I got to Sundance and I had to figure out how the f— to pump. I had no idea how anyone does this. How to people do this?

In the middle of thinking, “I could hide in the bathroom, I could miss an interview for my movie or I could just walk into the photo that I’m late to,” and say, “This is where I’m at, this is literally what’s going on. I can’t escape this; I need to do this right now. And there’s no other time to do it.” [That] felt like the right choice not just for me, but for people who will have kids and be like, “How the f— did anyone else deal with this? I don’t know I never saw them because we all hide in bathrooms!”

I was trying to think of the first time I saw someone pregnant working on a film set and I could only think of  cinematographer Rachel Morrison, when she released a picture of her pregnant on set. Is Hollywood conducive to motherhood?

I was so happy to sign the recent petition to the DGA to work on paid maternity leave for members. We shot our feature a year and a half ago, you get paid for that all in advance. And that was about a little less than what you need to survive for a year. So last spring I really needed to start working again. I did one TV episode right after we finished “Shirley” and I found out during that shoot that I had massive pregnancy complications. I had to quit all my other TV director jobs for the summer and just stay in.

It’s not like working in cinema is really easy and you can do it from your computer, 9 to 5. If you’re doing your job as a director, you’re on your feet 12 to 14 hours a day, for maybe a month straight, maybe three months straight. Over the course of the TV director job I did while I was pregnant, the baby fell really far behind in weight and I had to stop working completely. This summer I was worried I was going to lose my DGA benefits, or not going to have insurance because I couldn’t work. I’m just about to be able to go back to work, this has been eight months.

It’s so nice to see other women are facing the same dilemma and are calling for support around it. The wonderful thing about the DGA is that it protects directors in a way that we really need. I’m so grateful to have the health insurance that I do have. So thank God for the union support in that way. But I do think, obviously, that maternity stuff has been overlooked and I think sadly it’s because not only were women not getting jobs in the numbers where they could have organized to ask for this kind of support, but I think women have often had to hide.

I know women who have had to hide, to lie and pretend that they weren’t pregnant so they wouldn’t get fired off of shooting movies. I’m glad it’s an issue that’s getting more attention right now.

It’s 2020, why is it still difficult for women to find time/places around breast feeding or pumping. Why is there a stigma around this?

Thankfully, we’ve opened up more spaces for women to breast feed. I see more and more women breastfeeding in public, which is amazing. For working women, you’re not just bringing your child to your office all day, so you’re there for maybe eight to 12 hours and you need to pump. I’ve heard the craziest horror stories, you’re basically trapped in a bathroom for like three hours a day at work trying to make this happen. … Probably because there’s a lot of confusion around women’s bodies and their power. We love to shame women into corners for their bodily functions. But the act of pumping is the act of maintaining life on Earth, just like the act of breastfeeding and the act of being pregnant. The more we normalize these bodily functions and these necessities, I hope, the easier it will be for women to find ways to do it in a way that’s also satisfying.

Being able to pump more and being able to pump while sitting in a meeting and pump if you’re in a board meeting and sit there and have it be fairly normal. I’m hopeful that the more that we can see images of this as a normal act, because everyone does it who is raising a child, the easier it is for women to feel integrated into their lives in a way that’s satisfying.

Any lingering thoughts about the photograph?

I’m not going to lie, I’m scared about putting [the photo] online because I’m worried that it could be perceived as sensational instead of as so familiar and ordinary and normal.

You’re supposed to pump eight times a day (if you’re away from your baby). That’s eight hours of your day. It’s really impossible to do it and have a normal life. This feels so important to me partly because it’s such a large part of my life, and when you have a preemie also I have to feed my baby partially through breastfeeding and partially on the bottle. Pumping is how I feed my child. While I am afraid of it seeming sensational, it’s such an ordinary, life-supporting act. I really hope that the image is seen as that. That’s the biggest reason I want the image to go out in the world. I want this to feel not like a sensational, but like a very, very ordinary image. That it’s just a woman at work. I’m at Sundance, I have to do press for my movie, I have to put a pump on my boobs. It’s either I don’t pump or I do and I guess this is the image that results.

I’m hoping that this doesn’t feel like it’s about me, but more that it’s about all of the mothers of the world who do this work silently and invisibly. I would love if everyone posted images of themselves pumping so this feels very normal and very ordinary.

Decker’s film “Shirley” stars Elisabeth Moss as writer Shirley Jackson. The movie — written by Sarah Gubbins and adapted from a novel by Susan Scarf Merrell — imagines that a young couple moves in with Shirley and her professor husband, Stanley Hyman (Michael Stuhlbarg). The wife in the couple, Rose (Odessa Young), and Shirley form a bond that is maternal, romantic and companionable. It’s also slightly vampiric; Shirley sees Rose as fodder for her writing, which is what she cares about most in the world.