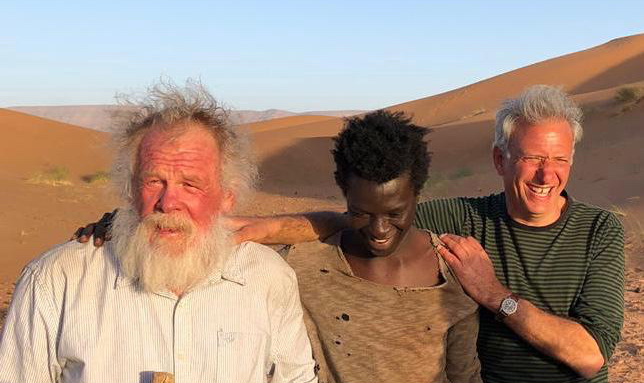 It’s 2085. There is no more electricity or machines on Earth. The planet is mostly a vast desert. Crops no longer grow. Children have not been born for a decade and there are very few people left alive due to a virus that debilitates people’s lungs. A young African finds a cache of film reels in a Paris apartment, all bearing the inscription “Cineteca di Bologna.” He will become the world’s last moviemaker after traveling across Europe to Athens. In “Last Words,” Italy-based U.S. director Jonathan Nossiter (“Mondovino,” “Sunday”) tackles the climate crisis while also addressing concerns over the impending death of cinema and has fun doing so with a stellar ensemble cast comprising Nick Nolte, Charlotte Rampling, Alba Rohrwacher and Stellan Skarsgaard. The Cannes Label film, produced by Italy’s Donatella Palermo (“Fire at Sea”) and RAI Cinema, has “an urgency” these days, he tells Variety. This is undeniable. If nothing else, for the prescient handshake scene in the above clip. Actually for many reasons. Edited excerpts from the conversation.

I’ve read that this film is inspired by a book written by your friend Santiago Amigorena, who co-produced your “Rio Sex Comedy.”

Yeah, Santiago wrote a kind of love letter to the power of literature in this beautiful prose poem. And it moved me because his love for literature, I have that (same) love for cinema. I’ve dedicated my life to movies, to believing in their power, and also to the idea of the world coming to an end. … For years I tried to pay attention to the relationship between agriculture and global warming and the state of climate crisis. But my concern was how to talk about the climate crisis in a way that was different from a preaching documentary … or a holiday disaster film where basically you’re just playing with people’s fears. But to try and get people to think about climate crisis through their heart, through the emotion, through something fundamentally positive.

So climate crisis and also moviegoing as an endangered experience

It’s a love letter to the beauty and the power of cinema as a place where people can come together … I still believe, even if it’s dying out, in the act of going to the movies.

How did you work with your amazing cast? It seems like such a collective labor of love.

Yes. In the first drafts of the script I’d written lots of semi-erotic scenes, but they all disappeared in large part thanks to Stellan Skarsgaard. I wrote each part for each person and they were very, very helpful throughout the whole writing process and the editing. They’re all real collaborators … I mean, Nick (Nolte) I came to know – I didn’t know Nick until we did the casting – and I didn’t know Khalifa (Touray) whom I met in a refugee camp. But Stellan, Charlotte, Alba, we’re old friends. And they worked on the script and Stellan was very helpful in getting me to weed out what wasn’t necessary. At the end of the day, I think the handshake between Stellan and Nick is an incredibly erotic moment. I mean it. Instead of a sex scene, you get two people shaking hands. It’s charged with something deeply sensual. And the beauty of whatever it means, of the human touch, now with COVID; it’s incredible how much that handshake means … it’s almost funny.