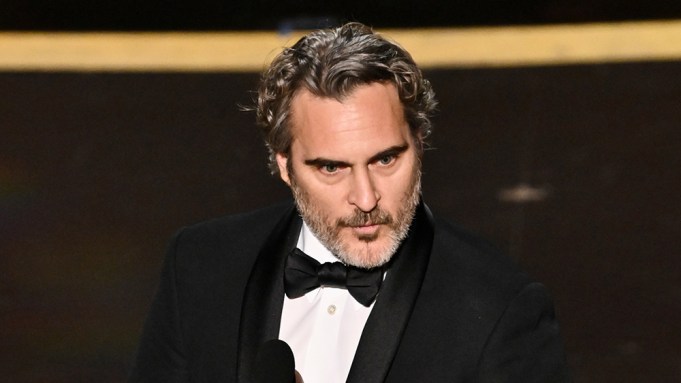 Joaquin Phoenix accepted his best actor award for “Joker” at Sunday’s Academy Awards with a lengthy and impassioned speech that touched on racism, animal rights and his own ability to grow and change.

“I do not feel elevated above any of my fellow nominees or anyone in this room, because we share the same love, the love of film and this form of expression has given me the most extraordinary I don’t know what I’d be without it,” Phoenix said. “But I think the greatest gift that it has given me, and many of us in this room, is the opportunity to use our voice for the voiceless.”

In an expansion to his speech at the BAFTAs about representation in the film industry, Phoenix referenced a suite of progressive causes. “Whether we’re talking about gender inequality or racism or queer rights or indigenous rights or animal rights, we’re talking about the fight against the belief, one nation, one race, one gender or one species has the right to dominate, control and use and exploit another with impunity,” he said. “I think that we’ve become very disconnected from the natural world and many of us, what we’re guilty of is an egocentric world view, the belief that we’re the center of the universe.”

The actor, who has influenced several awards season events to adopt vegan or mostly vegan menus, continued, “We go into the natural world and we plunder it for its resources. We feel entitled to artificially inseminate a cow and when she gives birth, we steal her baby. Even though her cries of anguish are unmistakable. And then we take her milk that’s intended for her calf and we put it in our coffee and our cereal. I think we fear the idea of personal change, because we think we have to sacrifice something, to give something up. But human beings at our best are so inventive and creative and ingenious, I think that when we use love and compassion as our guiding principles, we can create, develop and implement systems of change that are beneficial to all sentient beings and to the environment.”

Phoenix then shifted, and alluded to his reputation for difficult behavior on set as an actor, and most notoriously for his 2010 mockumentary “I’m Still Here.”

“I’ve been a scoundrel in my life. I’ve been selfish, I’ve been cruel at times, hard to work with,” he said. “I’m grateful that so many of you in this room have given me a second chance. And I think that’s when we’re at our best, when we support each other, not when we cancel each other out for past mistakes, but when we help each other to grow, when we educate each other, when we guide each other toward redemption. That is the best of humanity.”

After a long, emotional pause, Phoenix concluded by evoking his late brother, the actor River Phoenix.

“When he was 17, my brother wrote this lyric, he said, ‘Run to the rescue with love and peace will follow,'” Phoenix said. “Thank you.”

He did not appear backstage to speak to press.

The 45-year-old actor maintained a commanding lead against his fellow nominees throughout the awards season, sweeping across numerous awards bodies with wins at the Screen Actors Guild, BAFTAs and Golden Globes.

Phoenix had been nominated by the Academy three times before his win on Sunday, once in best supporting actor for “Gladiator” in 2001 and twice in best actor, for “Walk the Line” in 2006 and “The Master” in 2013. He is the second performer to win an Academy Award for playing the Joker, after Heath Ledger’s posthumous supporting actor win in 2009 for “The Dark Knight.”

Other nominees in the best actor category were Antonio Banderas (“Pain and Glory”), Adam Driver (“Marriage Story”), Leonardo DiCaprio (“Once Upon a Time in Hollywood”) and Jonathan Pryce (“The Two Popes”).