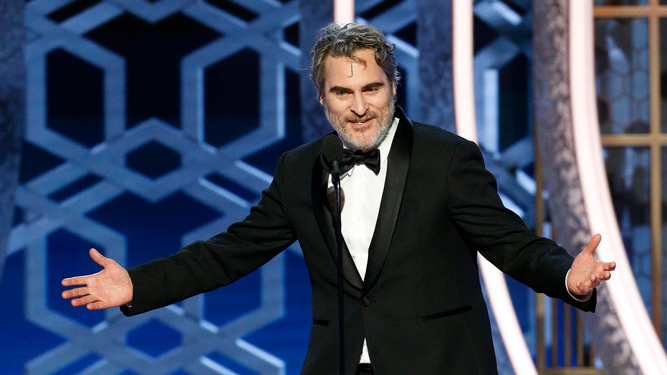 Joaquin Phoenix took home the Golden Globe on Sunday night for his role in “Joker,” but not without some drama.

After acknowledging his fellow nominees, Phoenix, a long-time skeptic of Hollywood awards shows, said “There is no f—ing best actor.”

NBC proceeded to cut out the audio as he dropped multiple f-bombs, all of which were muted for TV viewers.

“I’m such a pain in the ass,” he continued in a rambling speech, acknowledging “Joker” director Todd Phillips. “I cannot believe you put up with me.”

He also lauded the Globes for switching to a vegan meal for the ceremony, thanking the Hollywood Foreign Press for “recognizing and acknowledging the link between animal agriculture and climate change. It’s a very bold move, making tonight plant-based,” the vegan actor said.

Several of the night’s Golden Globe winners, including Patricia Arquette, Ellen DeGeneres and Michelle Williams had made political and social statements throughout the show, from well-wishes for those affected by the devastating wildfires in Australia to pleas for more voters in the 2020 election.

But Phoenix, ever the Joker, questioned celebrities’ commitment to take action.

“It’s really nice that so many people come up and sent their well-wishes, but we have to do more than that, right?” Phoenix asked. “I have not always been a virtuous man. I’m learning so much — so many of you in this room have given me multiple opportunities to get it right.”

He continued, “It’s great to vote but sometimes we have to take that responsibility on ourselves and make changes and sacrifices in our own lives. I hope that we can do that — we don’t have to take private jets to Palm Springs sometimes or back, please,” he said. “I’ll try to do better and I hope you will too. Thank you so much for putting up with me. I’m so grateful for this night and all of you, thank you.”

He continued talking but the music began to play as he completed his speech.

Phoenix has now become the second actor to win a prize from the Hollywood Foreign Press Association for portraying the Joker. At the 2009 Golden Globes, Heath Ledger won a posthumous award in the best supporting actor category for “The Dark Knight.”

Sunday’s win marked Phoenix’s second Golden Globes victory. He previously received a trophy in 2006 for best actor in a musical or comedy for playing Johnny Cash in “Walk The Line.” He has been nominated for four other Golden Globes: in 2001 for “Gladiator,” in 2013 for “The Master,” in 2014 for “Her” and in 2015 for “Inherent Vice.”

Phoenix’s win was a bit of a surprise, as many pundits had predicted that Adam Driver would be honored for his performance in “Marriage Story.” But the Globes have a way of changing awards season momentum, and Phoenix — who has never won an Oscar before — could repeat again next month at the Academy Awards.