Joaquin Phoenix Has No Patience in Backstage Golden Globes Interview 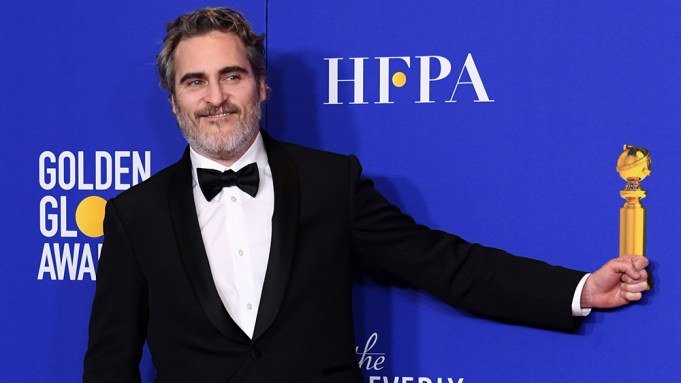 Joaquin Phoenix was “tricked” into coming backstage to greet the press following his Golden Globe win for lead actor in a drama for “Joker.”

The actor known for his idiosyncratic habits did not disappoint in his time at the microphone. He opened by telling the crowd that “they f—ing tricked me” into making the backstage scene, pointing to his PR team in the corner.

The first question added to the awkwardness. How did he approach the role of the unhinged supervillain? “This is old news,” Phoenix shot back with a quizzical look, as if he was genuinely surprised to be asked about the movie for which he was recognized. “I’ve answered this for six months,” he said.

But Phoenix dug deep and found the words. “The way I worked on this was, um, quite erratic. I didn’t attack it linear-ly. I was most curious about the medications he was taking and the side effects of those medications.”

Phoenix volunteered that he read several books about political assassins to prepare for the film from Todd Phillips, a helmer more known for comedy and superheroes. “They share a similar personality type to what I defined Arthur with,” he explained. And again, he observed: “I feel like I already answered this question.”

When pressed about whether “Joker’s” ending set the stage for a sequel, Phoenix bristled at the suggestion that art might share the stage with commerce concerns. “I don’t think that I’ve ever done too many predictable things. So if that came up it’s not because Todd (Phillips) or I are following some rule book. It’s because we feel inspired to explore the character more thoroughly. That’d be the only reason for me to do it.”

Phoenix scratched his head and then turned the questions on the crowd. “Have you guys been sitting here all night? Do they bring you food? Do you have drinks?”

From there the conversation turned to the HFPA’s decision to serve vegan food only this year in the ballroom. On this subject, Phoenix was very articulate.

“This is the first time I’ve ever eaten the food at this ceremony,” he said. ” I thought it was excellent. I was so moved by the decision to make tonight plant-based. It’s such an important statement.”

He cited the statistics that the process of raising cattle and processing meat is one of the biggest sources of pollution on the planet. “The statistics are staggering,” he said. “It’s coming to a point now where the evidence is irrefutable and undeniable.”

Phoenix likened the need for substantive action on climate change to the groundswell of public outrage that led to bans on cigarette smoking in most public places. “Now consuming animal products is no longer a personal choice,” he said. “It’s having drastic consequences around the world.”

He added a few more superlatives — “incredible,” “brave” and “compassionate” — about the HFPA’s vote for the vegan movement.

“I’ve never been so proud to attend an awards ceremony as I am tonight,” he said.

While he seemed to be enjoying a moment of plant-based euphoria, Phoenix was not completely untethered from the reality of his situation. He ended the session with as true a statement — and as genuine an expression of gratitude — as any winner uttered backstage all night.

“My publicist is telling me I need to go home,” he said. “Thank you. Thank you very much.”