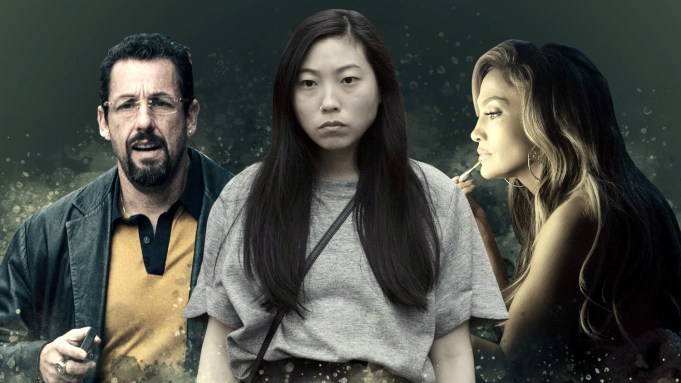 The Oscars have never been edgy, but this year, the Academy Awards reminded you of how stodgy they could be. After the dust settled on Monday morning from this year’s nominations, it was surprising just how many favorites had been snubbed. No Jennifer Lopez for “Hustlers.” No Awkwafina for “The Farewell.” No Lupita Nyong’o for “Us.” No Adam Sandler for “Uncut Gems.” No Beyonce for best original song from “The Lion King.” And, once again, the race for best director proved to be a boys club, with an all-male slate of nominees that didn’t include Greta Gerwig (“Little Women”), Lulu Wang (“The Farewell”), Lorene Scafaria (“Hustlers”), Melina Matsoukas (“Queen & Slim”) and Marielle Heller (“A Beautiful Day in the Neighborhood”).

There was an odd disconnect watching the nominations unspool, announced by Issa Rae and John Cho, as so many actors of color were left out. But at least it wasn’t another full repeat of #OscarSoWhite. Cynthia Erivo picked up the first acting nomination of her career for “Harriet” (and another one for best song).

“Joker,” an origin story starring Joaquin Phoenix as the comic book villain before he becomes Batman’s nemesis, led all movies with 11 nominations. “1917,” “Once Upon a Time in Hollywood” and “The Irishman” followed with 10 nods each. Here are the biggest snubs and surprises from this year’s Oscars nominations.

SNUB: Jennifer Lopez, “Hustlers”
Did the younger Oscar voters not vote? The biggest disappointment from Monday’s announcement was that Jennifer Lopez is not an Oscar nominee. Her tour-de-force role as a New York stripper in Scafaria’s drama, which drew comparisons to “Erin Brockovich,” was supposed to catapult her to the top of the best supporting actress category (she received both a Golden Globe and Screen Actors Guild nomination). Plus, “Hustlers” grossed more than $100 million at the box office, thanks in large part to Lopez’s work.

SNUB: Awkwafina, “The Farewell”
After winning a Golden Globe for “The Farewell,” Awkwafina should have been nominated for best actress. Her performance in “The Farewell,” a Sundance darling that opened in theaters in August, might have been too understated for voters. The movie also failed to receive a nomination for screenplay or best supporting actress (Zhao Shuzhen).

SNUB: Lupita Nyong’o, “Us”
The Oscars have long had a bias against films in the horror genre. Although Jordan Peele’s “Get Out” picked up four Oscar nominations in 2018, his sophomore feature “Us” didn’t receive the same warm reception from the Academy. Nyong’o, who won an Oscar for “12 Years a Slave,” was nominated for a SAG Award for “Us.” However, the Academy didn’t recognize her in the best actress race for her terrifying dual roles, playing the mother of a family under attack — and her clone.

SNUB: Greta Gerwig for directing “Little Women”
Although Gerwig’s adaptation of “Little Women” received stellar reviews and six nominations, including best picture, best actress (Saoirse Ronan) and best adapted screenplay (for Gerwig), it didn’t land a nod for best directing. If Gerwig had been recognized there, she would have been the first woman in Oscars history to be nominated for best director twice (after “Lady Bird”). Instead, the directors branch went with another all-male lineup: Martin Scorsese (“The Irishman”), Sam Mendes (“1917”), Quentin Tarantino (“Once Upon a Time in Hollywood”), Bong Joon Ho (“Parasite”) and Todd Phillips (“Joker”).

SNUB: Taron Egerton, “Rocketman”
Egerton had been mounting a strong awards campaign. For playing Elton John in “Rocketman,” he beat Leonardo DiCaprio at the Golden Globes and earned a SAG and BAFTA nomination, yet the best actor race was too crowded. Still, it doesn’t seem fair that Rami Malek, who lip synced as Freddie Mercury in “Bohemian Rhapsody,” would win last year’s best actor Oscar, while Egerton — who really did sing all of John’s songs — didn’t get nominated.

SNUB: Christian Bale, “Ford v Ferrari”
It was a good day for “Ford v Ferrari,” which became the first movie about racecar drivers to be nominated for best picture. Christian Bale, as Ken Miles, was in the running for best actor. But this year’s packed actor field, and Bale’s previous four Oscar nominations (including one just last year for “Vice”), led voters to gravitate toward other performances.

SNUB: Adam Sandler, “Uncut Gems”
Sandler’s portrayal of a New York jeweler in “Uncut Gems” is perhaps the performance of his career. That the movie peaked at the box office during the holidays, just as Oscar voters were filling out their ballots, led some to believe that he could have been a surprise Academy Award nominee. But sadly, “Uncut Gems” proved to be too edgy for the Oscars.

SNUB: George MacKay, “1917”
“1917” is both a box office hit and an Oscars favorite, with 10 nominations. But it’s odd that MacKay, who carries every scene of this World War I saga directed in two long takes, hasn’t been collecting any acting awards. If “1917” goes on to win best picture at the Oscars, it will be the first movie in more than a decade — since “Slumdog Millionaire” in 2008 — to do that without any acting nominations.

SNUB: Eddie Murphy, “Dolemite Is My Name”
Murphy earned some of his best reviews for playing the actor and comedian Rudy Ray Moore in “Dolemite Is My Name.” The Oscars usually loves to reward actors for playing real-life people, especially other actors, but the Netflix release had trouble breaking into this year’s best actor race. For now, Murphy’s only Oscar nomination is for “Dreamgirls.”

SNUB: Jamie Foxx, “Just Mercy”
What happened to “Just Mercy”? In the fall, Warner Bros. executives thought they had a formidable Oscar contender on its hands for a story about a young lawyer (Michael B. Jordan) who tries to save his innocent client (Jamie Foxx) from death row. But for some reason, the studio didn’t release the film wide until after ballots closed last weekend. As a result, Foxx didn’t receive an Oscar nomination.

SNUB: Beyonce, “Spirit”
Beyonce’s ballad from “The Lion King” was thought to be a lock in the best original song category. But the real loser is the Oscars, who now won’t be able to invite her to perform at the ceremony.

SURPRISE: Antonio Banderas, “Pain and Glory”
Since Banderas was awarded the best acting prize at the Cannes Film Festival last May for Pedro Almodovar’s drama about an aging filmmaker, he’s been picking up accolades. And now he has his first Oscar nomination.

SURPRISE: Jonathan Pryce, “The Two Popes”
After missing out on a SAG nomination, Jonathan Pryce’s odds at the Oscars were starting to look less likely, but voters evidently loved his portrayal of Pope Francis in this Netflix drama. Anthony Hopkins, who plays his predecessor, Pope Benedict XVI, also scored a nomination in the best supporting actor category.

SURPRISE: Florence Pugh, “Little Women”
After missing out on both a Golden Globe and SAG nomination, it looked like Pugh might not be invited to the Oscars this year. But the holidays gave voters enough time to catch up with “Little Women” and Pugh’s interpretation of Amy proved too great — think Kate Winslet circa “Sense and Sensibility” — to ignore.