Continue to Variety SKIP AD
You will be redirected back to your article in seconds
Dec 25, 2020 9:00am PT 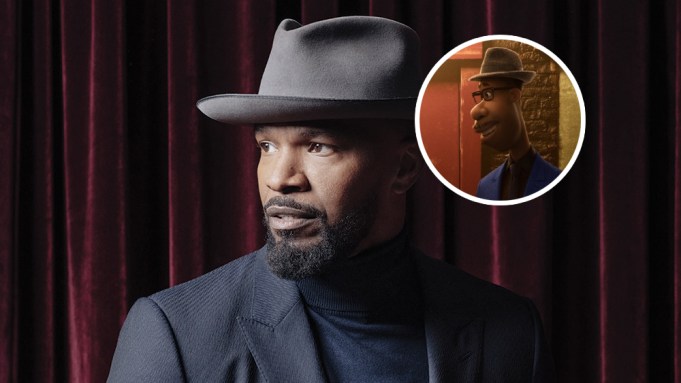 Caitlin Cronenberg for Variety/Courtesy of Disney

There are few entertainers like Jamie Foxx; he’s a multihyphenate superstar with the trophy case to back it up. Though Foxx has the range and a backlog of dramatic, comedic and generally off-the wall characters to pull from, when it came to voicing Joe Gardner in Disney-Pixar’s “Soul,” the film’s creative team just wanted the Oscar- and Grammy-winner to be himself, which also meant bringing the full breadth of his Blackness to the role.

“In my career, I’ve never had to apologize for being Black,” Foxx tells Variety, looking back on his Hollywood journey. “I was on ‘In Living Color’ — I had a Black boss [Keenan Ivory Wayans, who Foxx touts as a mentor], Black writers, Black creators. Then with ‘The Jamie Foxx Show’ it was all Black. So, I’ve never had to worry about turning my Black up or turning my Black down. I’ve just been me and it is always worked out for me. When I do that, great things come out of it.”

Foxx considers this role one of those “great things:” “For me to be able to say, and be proud to say, [I’m] the first African-American lead in Disney-Pixar, that’s amazing. That feels good.”

Through its star and its focus on jazz, Black culture is the centerpiece of the film — which centers on Joe, an aspiring jazz musician, who works as a middle school teacher in New York City while he awaits his big break. Just as things are looking up, an accident separates Joe’s soul from his body and he winds up in the Great Before, scrambling to make it back to Earth in time to play a gig that could kick-start his music career. But it’s the specificity of Joe’s world that show helps the music-focused, animated dramedy really sing.

For Foxx, that specificity all begins with the film’s co-director and co-writer Kemp Powers.

“Kemp was smart, [he] was like, ‘No, I want him to be Black, I want that haircut to be [right]’” Foxx adds, noting the inclusion of scenes at the local barbershop – a pillar of many Black communities. “When we’ve got to get a cut, that’s a cultural thing.”

“We wanted it to be as correct as we could, to be as authentic as we could,” Docter explains. “Because I think when you are in the audience, and you can tell something’s not quite right, it has an effect on the potency of the film. What we’re always trying to do is just move people, make them care, make them feel something. And I think those two things are very connected.”

The filmmakers enlisted a host of A-list cultural, music and faith consultants — including Ryan Coogler, Kenya Barris, Quincy Jones and Yo-Yo Ma — to lend their expertise and perspective to the film’s story, in addition to the artisans who worked on the film directly, like Jon Batiste (who composed original music for the film) or Daveed Diggs and Ahmir “Questlove” Thompson (who voiced characters Paul and Curley in the film, while also consulting on the story).

Speaking of the internal cultural collective drafted by the filmmakers, Powers says, “The wonderful thing about having all these voices chime in, is that people realize that in many cases, they all disagreed with one another.”

“[The assembly of consultants] wasn’t an attempt to cover everything Black,” he explains. “It was actually an attempt to kind of understand the diversity of thinking, the diversity of humanity, and if anything, just avoid certain stumbling blocks. But I love the fact that in many cases, our consultants had vigorous debates [with us] about a lot of the things in the film. This film involved a lot of discussion in the creation of it.”

Beyond the topic of representation, “Soul” also has the weighty task of asking and answering the big questions of what lies beyond this world, both before and after we reach it, and how (and why) to make sure every second counts.

“I believe that family entertainment should be trying to ask big questions,” Powers explains. “We didn’t read fairy tales when we were kids to to get product placement; there’s supposed to be lessons in these stories.”

“We spoke with someone who said that we were able to explain what depression felt like to him,” Murray adds, recounting a conversation with a fan of the film. “He’s like, ‘That’s what it looked like and now I can show that to people and say that’s what I’m feeling.’ And I just thought, ‘That’s incredible.’”

Helping audiences reflect on those big questions is an opportunity that Tina Fey (who voices 22, a reluctant soul who Joe unwittingly becomes a mentor for during his time in The Great Before) also relished, particularly with the film debuting amid the pandemic.

“It’s really been making me think a lot about a life well-lived and separating that from achievement, from external validation, and chasing that,” Fey says. “It’s really about [asking] ‘Are you present for the people in your life? Are you present for yourself to enjoy small moments, to enjoy stillness, to enjoy the process of getting where you’re going?’ And I think that is something we’ve all been reflecting on these last eight or nine months.”

She continues: “I hope people feel connected to their lives after watching the film and appreciative of being alive, even when the way you’re living in this moment might not be exactly what you planned or aspire to.”

“Soul” is now streaming on Disney plus.