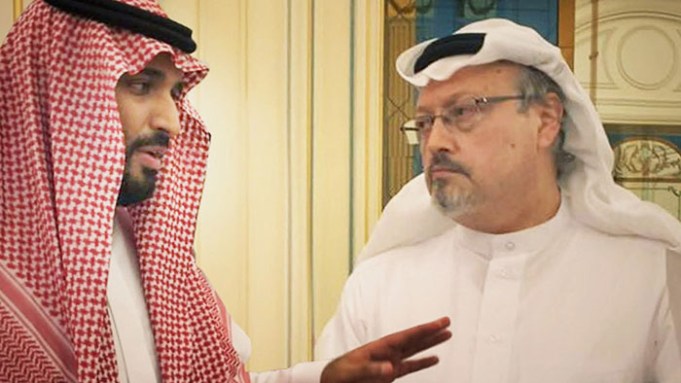 Director Bryan Fogel premiered his searing new documentary “The Dissident,” a timely examination of the murder of Washington Post journalist Jamal Khashoggi, at Sundance on Friday. The film came to Sundance hoping to secure distribution, and Fogel used the starry debut to implore studios and streaming services interested in buying the project to commit to an unflinching release despite the hot-button topic.

Khashoggi was killed and his body was dismembered after he visited the Saudi consulate in Istanbul. The CIA determined that Saudi Crown Prince Mohammad bin Salman ordered his assassination, which he has long denied.

“In my dream of dreams, distributors will not be fearful and give this the global release that this deserves,” Fogel said to applause at Park City’s MARC Theater, before a crowd that included Hillary Clinton and Alec Baldwin.

“In my dream of dreams, distributors will stand up to Saudi Arabia, [and champion] freedom of speech, freedom of press, and journalists who want to make this world a better place and help preserve Jamal’s legacy,” he added.

It’s unclear if Fogel meant global markets might be resistant to showing the project, or if he was implying that that financial ties that some Hollywood companies have with the Kingdom of Saudi Arabia would make them hesitant to back the project. Variety owner Penske Media has investment from the Saudi government’s public investment fund.

The film did not shy away from a meticulous reading of the transcripts from Khashoggi’s death, including his protests inside the room and his anesthetizing, and then his dismembering. Copies of the transcripts were shown, not reenactments, but the audience still squirmed in their seats. Moments featuring President Donald Trump, who used veto powers to permit the sale of arms to Saudi Arabia after the killing, were met with hisses from the crowd. One man shouted, “Liar!”

The documentary takes a hard look at the evidence against the Saudi government and Bin Salman. MBS, as he is known, has consistently denied premeditation or knowledge of the killing. Several individuals were convicted of the murder, though their names and the evidence used to convict them was never released.

Many American business leaders have distanced themselves from Saudi Arabia amid the fallout from Khashoggi’s death. Prior to the killing of Khashoggi, a Washington Post writer who lived in self-exile, huge corporations like Amazon and Disney were engaged in talks to partner on bringing American media to the country. Those talks cooled somewhat following the response to his slaughter. The country has made moves to modernize. After a decades-long ban, it allowed movie theaters to open, including locations operated by Western companies such as AMC. A delegation from Saudi Arabia’s cultural leadership attended the Cannes Film Festival in 2018 trying to encourage Hollywood studios to shoot movies in the country.

Fogel is the Academy Award-winning director of the sports doping doc “Icarus.” UTA Independent Film Group is repping the sale of “The Dissident” to prospective buyers.