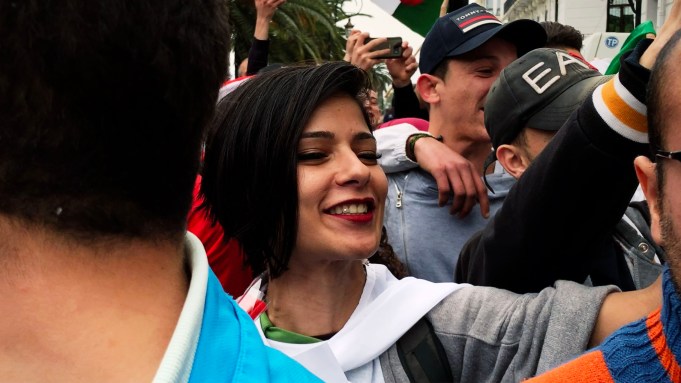 On Feb. 14 last year, Karim Aïnouz arrived in Algeria to trace via the story of his parents the Algerian Revolution which happened 60 years ago – its 1954-62 War of Independence from France. The uprising he very quickly started to shoot, however, was one happening right then, the Revolution of Smiles, whose first street demonstration erupted on March 1.

The result, “Nardjes A.,” world premieres in Panorama Dokumente at this week’s Berlin Intl. Film Festival.

On the second week of protests, Aïnouz was advised by a friend guide that he shouldn’t shoot anything at all. “But I don’t take ‘no’ for an answer,” he remembers. Looking to film the Revolution from the viewpoint of an Algerian, he located female activist Nardjes Asli through a friend. “Nardjes A.” is essentially a film diary, shot over March 8, International Woman’s Day, from 8am to 5am the next day, as Nardjes Asli joins a rally, has dinner with protestors, goes to a club to dance.

In form, shot on the fly, following Nardjes, “Nardjes A.” is lightyears away from the Douglas Sirk high style of “The Invisible Life” which won the Cannes Festival’s Un Certain Regard last year.

Yet just the teaser-trailer is enough to suggest that this is the work of an inveterate filmmaker. It begins with a monotone grey-blue sky of Algiers, captures the barrage of songs and milling bodies of the protestors, and a sense of momentum as Nardjes, walking down streets, reproaches in voiceover the government for ruining her generation’s lives. But, she concludes, “You underestimated us, me and my peers.”

Some of the same focus remains, as well. Nardjes A.’s protests are not just against aged Algerian president Abdelaziz Bouteflika running for a fifth term of office but, like “Invisible Life,” a struggle  for gender freedom in  the face of arcane patriarchy.

Part of the film’s virtue, says Aïnouz, is lending visibility to a Revolution that has become a kind of media blind spot, rarely in the news.

The protests are “very empowering, and the film captures beautifully and, with a rawness, the electrifying atmosphere of the protest, the power behind it, and the possibility of transformation,” says Panorama head Michael Stütz.

Some things did change after the Revolution of Smiles started, says Aïnouz. He places his faith in Nardjes A. and her generation that things will change more profoundly. “It’s a generation often seen as very superficial, just interested in fashion cues, but it’s actually reclaiming its country, so Berlin is a great platform for Nardjes to speak out,” Aïnouz enthuses.