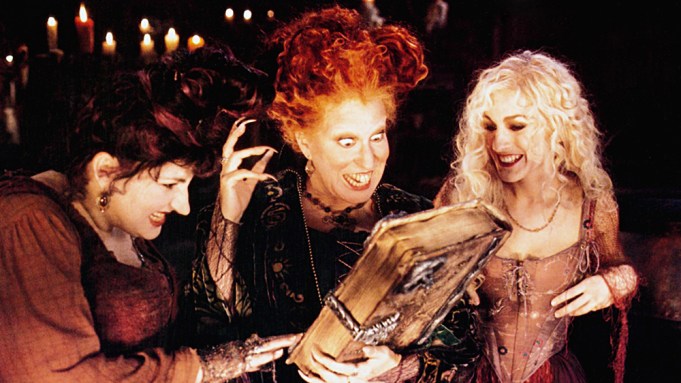 On Friday night, the stars of “Hocus Pocus” are reuniting for a virtual charity benefit, but will the Sanderson sisters ever return for an actual sequel?

Disney Plus is currently working on a sequel to “Hocus Pocus,” but no casting or storyline details have been announced, as the project remains in development.

“Hocus Pocus 2” will be directed by Adam Shankman, Variety reported earlier this year, but since our report in March, no new developments have come about to the buzzy sequel, which has been in the works for quite some time at the Disney streaming service.

When Shankman came on board to “Hocus Pocus 2,” the original stars — Bette Midler, Sarah Jessica Parker and Kathy Najimy — were not attached to the sequel, though sources, at the time, said Disney is hopeful that the trio would become involved in some capacity, ideally reprising their roles, rather than completely rebooting the 1993 film.

The original “Hocus Pocus,” which tanked at the 1993 box office but became a cult hit, was directed by Kenny Ortega, the mastermind behind “High School Musical,” Disney’s “The Descendants” and Netflix’s new musical series, “Julie and the Phantoms.”

Speaking to Variety in an interview conducted earlier this year, Ortega says he can’t help but smile when seeing his projects find new generations of viewers, and so, he’s supportive of all reboots and sequels.

“It puts a big ‘ol smile on my face! It really does,” Ortega said, speaking to many of his projects getting a second life, including his 1992 film “Newsies,” which marked his feature directorial debut. “To see ‘Newsies’ become an award-winning Broadway musical and tour the world, to see ‘High School Musical’ so intelligently reimagined as a television series with an absolutely adorable cast and writing staff, and to see ‘Hocus Pocus’ become a cult film and now finally get an opportunity, perhaps with the original actresses, to happen again, I think it’s all exceptional.”

“It wouldn’t be happening if the original works didn’t impact an audience to come back at it again,” Ortega added. “I’m very pleased.”

Asked if he knows anything more about the “Hocus Pocus” sequel — which he is not attached to in any capacity — Ortega says he has not been made aware of anything, other than the fact that it’s being developed at Disney Plus with Shankman directing.

However, Ortega has one wish, should the sequel be greenlit.

“I would hope that a sequel would involve the three women in some major capacity,” he tells Variety.

Your 3 fav witches – @sarahjessicaparker @kathynajimy & ME – are returning for 1 night only on 10/30 at 8p ET! “In Search of the Sanderson Sisters” is the best thing to happen to #Halloween since Hocus Pocus + Reeses Pieces. Get your tix now (link in bio) and support @NYRP #nyrphulaween

Tonight, Midler is bringing together the core cast for a “Hocus Pocus” reunion — a mockumentary reading with an entirely new script, which brought all three stars back in costume as the fan-favorite witch sisters. Midler has also been posting about “Hocus Pocus,” in order to encourage her followers to get out and vote.

“In Search of the Sanderson Sisters: A Hocus Pocus Hulaween Takeover” is a one-night only event that costs $10 and directly proceeds the New York Restoration Project, the organization she founded in 1995 to clean and restore green spaces in New York City.

The original “Hocus Pocus” was certainly not a major box office success, bringing in $39 million worldwide on a $28 million budget, but since, has gained a huge cult following through DVDs and syndication, especially during the month of October when the film airs on repeat during Halloween programming.

During the coronavirus pandemic, with new film content on pause, Disney re-released “Hocus Pocus” in theaters, where the movie topped the U.S. box office, three decades after its original release. That’s proof enough that we need a sequel.