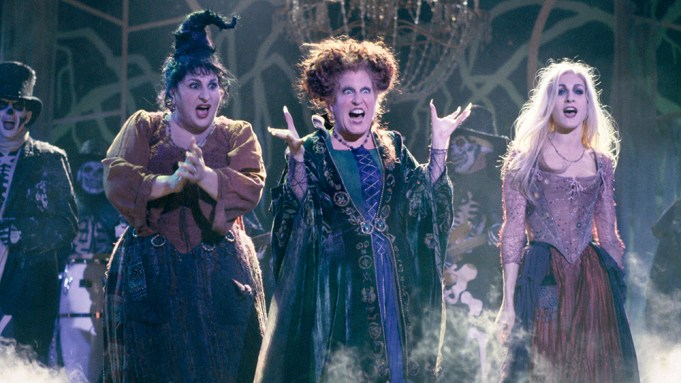 Disney rereleased the 1993 Halloween classic — starring Bette Midler, Kathy Najimy and Sarah Jessica Parker as a trio of witches — this weekend on the big screen, where it collected $650,000 on Friday. “Hocus Pocus,” which is currently playing in 2,570 U.S. cinemas, is expected to generate $1 million in ticket sales over the weekend.

Those box office receipts put “Hocus Pocus” ahead of more recent titles like “New Mutants,” Russell Crowe’s “Unhinged” and mystery-thriller “Infidel.” There’s a chance that Christopher Nolan’s “Tenet” matched “Hocus Pocus” in terms of Friday earnings, but Warner Bros. has not reported daily numbers and declined to comment. When overall weekend numbers are tallied on Sunday, it’s likely that “Tenet” will beat “Hocus Pocus” for first place. But, “Hocus Pocus” led the way on Friday based on studios that reported figures.

The box office has nearly come to a grinding halt due to the pandemic, with most studios delaying major movies into 2021 or later. Without new theatrical releases, “Hocus Pocus” didn’t have much competition to achieve box office glory.

In second place, Disney’s “New Mutants” brought in $260,000 on Friday. The “X-Men” sequel should gross around $940,000 through Sunday, bringing its domestic haul to $20 million. Following closely behind, Solstice Studios’ “Unhinged” amassed roughly $240,000 on Friday and looks to make $815,000 over the weekend for a North American total of $17 million.

Another blast from the past, “Star Wars: The Empire Strikes Back,” also graced box office charts. The movie, which initially debuted in 1980, pulled in $95,000 on Friday and could end this weekend with $250,000. After multiple rereleases, “The Empire Strikes Back” has crossed $550 million in global ticket sales.

“Hocus Pocus” wasn’t a critical or commercial darling when it first released in July of 1993, scoring just $39 million from a $28 million budget. (With this weekend’s earnings, its domestic tally hovers at $40.5 million.) But in recent years, it has become a must-watch TV event during the month of October and solidified its place as a cult classic. The Halloween-time favorite follows three witches as they are inadvertently resurrected by a young boy in Salem, Massachusetts.

A sequel to “Hocus Pocus” is currently in the works at Disney Plus. Adam Shankman, best known for “Hairspray,” “Step Up” and “A Walk to Remember,” is directing the follow-up from a screenplay by “Workaholics” writer Jen D’Angelo. At this time, it’s unknown if any original cast members will return.