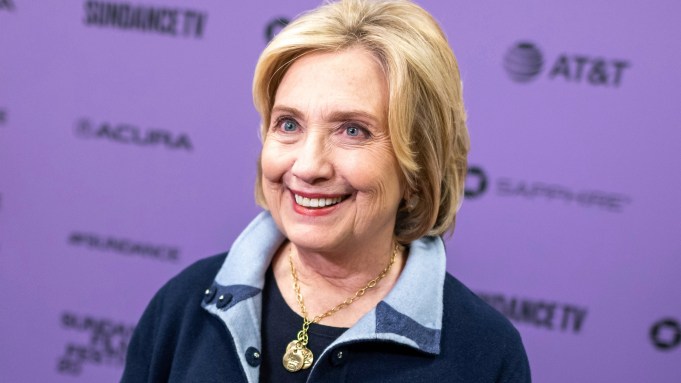 After two days of buzzy cameos out and about in Park City, Hillary Clinton finally took the main stage at the Sundance Film Festival.

A four-part viewing of her new Hulu docu-series “Hillary” premiered Saturday at the Ray Theater, where the dedicated audience had but one intermission during the marathon screening, but was later rewarded with a Q&A with Clinton and director Nanette Burstein.

A festival moderator jumped right into audience questions, which riffed on the ongoing impeachment process, Clinton’s decision to participate in the invasive doc, and, naturally, then 2020 election.

Top of mind for Clinton was what she called unprecedented digital attacks on women seeking office.

“You see this now, particularly aimed at with Elizabeth Warren, a lot of just incredibly vicious attacks going directly at her,” Clinton said. “So you have all of the usual problems that we know about from our history, and then you’ve got this whole new challenge from what happens on social media to women who speak out or speak up or put themselves out in a public way.”

Another query touched on ongoing fallout from her recent remarks doubting Bernie Sanders.

“People can support whoever they want to support,” Clinton said, “but when there’s a nominee, close ranks and support that nominee.”

That remark was one of the many times the audience broke out in applause. Impeachment was also top of mind, but Clinton said she wasn’t “expecting any miracles” when it comes to the removal of Trump from office. But in regards to the future of his administration and the Justice Department, Clinton concluded: “I hope it haunts them.”

Director Burstein also spoke why she made “Hillary” nearly four years after Clinton lost the 2016 election.

“I was still overcome with all the emotion of 2016, and it was too soon to re-litigate that. But there was a much bigger story — her whole life,” said Burstein, who believes Clinton’s life is a lens to look at modern history and topics like partisan politics and the women’s movement.

Despite a deep commitment to transparency and unprecedented access to her life, the former secretary of state said she had her tough moments.

“I was like a character out of 19th century literary magazine, fainting, saying ‘Bring me the smelling salts!’” Clinton said of some of Burstein’s questions. “But, I agreed to sit down and let her ask 35 hours of questions and, the thing is, then she did.”

All in, Clinton’s time lasted about 12 minutes before security ushered her out of the building. She thanked the volunteers and staff of Sundance and wondered why she hadn’t been sooner.

“Thank you!” audience members yelled from the rafters as she left.