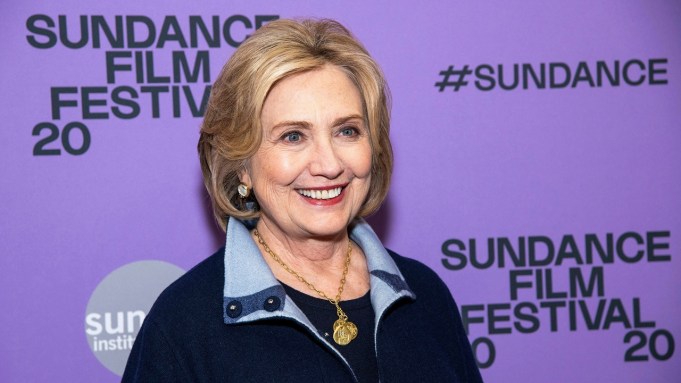 One of the breakout projects at this year’s Sundance Film Festival is “Hillary,” a four-hour docu-series about Hillary Clinton. The former first lady, Secretary of State and first woman presidential nominee from a major political party sat down for 35 hours of interviews with director Nanette Burstein, who also poured through exclusive footage from the 2016 campaign and additional sit downs with Bill Clinton, Chelsea Clinton, Barack Obama and more.

The result, which will premiere March 6 on Hulu, is a riveting portrait of a political trailblazer, including Clinton’s days as one of only 27 women in her class at Yale Law School and her 1993 lobbying as first lady for universal health care. One of themes that emerges throughout “Hillary” is how Clinton has always battled misogyny as a second-wave feminist, from when she refused to take her husband’s last name to when she famously said on the 1992 campaign trail: “I suppose I could have stayed home and baked cookies and had teas, but what I decided was to fulfill my profession.”

Originally, the docu-series was only going to focus on the 2016 election, based on hundreds of hours of footage that Clinton’s campaign had captured. But Burstein (“The Kid Stays in the Picture,” “American Teen”) suggested they broaden the scope.

“While I was watching all the behind-the-scenes footage, I was also reading everything — the good, the bad and the ugly,” Burstein says. “And I realized what a touchstone she is and how she’s always just been at the tip of the spear. I thought that in order for people to truly understand this story and to talk about themes, it was important to lay out her whole life.”

In a wide-ranging conversation at Sundance, Clinton spoke to Variety about the film, misogyny directed toward women candidates, her thoughts on defeating Donald Trump in 2020 and why “Little Women’s” Greta Gerwig should have been nominated for best director at the Academy Awards.

Why was it important for you to have a woman director tell your story?

Hillary Clinton: I wanted to have the best director, and I had a preference for a woman director. I thought, No. 1, we need more women directors. And No. 2, a woman director would have an understanding of some of the issues in a very real way that would translate to the screen.

One of the things I really love about “Hillary” is how it places you as a trailblazer throughout your career even before you entered the White House as first lady. When did you first identify as a feminist?

I have always thought that being a feminist was just absolutely to be expected. Because what is it? It’s the belief that men and women should have the same equal rights in the economy, in politics, in the culture and society. So I never understand why it was controversial. And certainly, when I came of age and started going to college and law school, there were so many barriers to women’s full participation. There were jobs you couldn’t apply for, scholarships we weren’t eligible for, colleges we couldn’t go to. There was so much that said, “Stay in your lane.” And I was part of that second-wave of feminism where people said, “Wait a minute. We got to tear down these barriers and try to make sure that the promise of equality is real.”

The documentary revisits your 1992 comments about how you preferred to pursue your career over staying home and baking cookies, which was controversial at the time. In 2016, when Beyonce performed at a campaign event for you in Cleveland, she reclaimed that quote as a source of female empowerment. How did that feel?

I did not know that Beyonce was going to use that quote from the ’92 campaign about following my profession. But when I saw that setup on stage, and that was going to be prominently featured, I thought: “Good for you!” I mean, “Really good for you.” Her career trajectory has demonstrated clearly how she’s embraced feminism and stood up for herself and spoken out. And for her to adopt that and use it as a theme for her support of my campaign really made me just break out in a huge smile.

There’s a scene in the documentary where protesters are burning an effigy of you over your decision to pursue universal health care in 1993. Had you forgotten about that?

I had forgotten about that until I saw the film. Nanette does such a great job of demonstrating that, yeah, the film was about me, it’s about my life, but it’s about these bigger issues. Really, the arc of women’s lives and the women’s movement and both the advances we’ve made in politics, but also the pushback that we see so clearly today. I think that in the four hours, it should be really fruitful for lots of conversations about what I did or what I said, but more than that, how does this fit into the history of women’s rights and roles?

After “Hillary” premiered at Sundance, you spoke at the Q&A about the misogyny that women candidates face online, particularly women running for president. Why do you think there’s so much hatred for women who are seeking leadership positions?

It’s a great question. I don’t think it’s in any way limited to women trying to run for president. But because of the high visibility of women who try, misogyny that is directed not only to women themselves but to their supporters is so shocking. And I remember in 2016 — look, I have tough skin. I put myself out there. I was the one running. But what was said and done to my supporters, men and women — but predominantly women — who spoke for me or proclaimed their support for me, it was just so vile. And some of the groups, like Pantsuit Nation, they had 4 million members. And people were targeting individual members all over the country, insulting them and threatening them. So I’m seeing the same right now. Some of the organized efforts to undercut, demean, belittle the women who had been running and still are running in this election.

Did you ever go on the internet or Twitter to see what people were saying?

No, I never did. A lot of it was manufactured. We now know that a lot of it was amplified by Russian bots. That’s still going on. And I knew that it was not really about me, it was about the threat that a woman running for president posed to certain set beliefs and structures.

You were recently interviewed by Howard Stern. Was that fun and did you wish that you’d done that sooner?

I have to say, I actually really enjoyed my interview with Howard Stern, much to my surprise — and his. He interviewed me for two hours and 20 minutes, certainly the longest interview by far that I’ve ever done. Yes, he tried to get me to be on his show before, and I didn’t. But, like doing this documentary, I’m doing a lot of things that I never did before. I found his journey about how he really began to examine himself and what he said and how he behaved, I believe in that. I respected that. The experience I had with him was really a positive one.

Variety was founded in 1905, making it the oldest entertainment publication in the United States. I had a few questions I wanted to ask you that I think would be of interest to our readers. First, is it true that you were in a production of “Bye Bye Birdie” in school?

Yes. It was high school. On the condition, I’m not singing, but I lip synced.

Were you in other plays?

I was in some other plays. I had a speaking role, but not singing role, in “The Sound of Music.”

I know that you regularly attend Broadway shows. What’s the greatest musical or play you’ve seen in the last year?

I go to a lot. There are so many that I see. So let me plug a few, ok? I love “Ain’t Too Proud.” I saw it twice because I took my husband a second time. I loved “Hadestown.” I thought it was creative, innovative, great theater. I look forward to “West Side Story” being brought back. I like the theater. I like both musicals, comedy and I like drama.

What’s on your DVR or TiVo?

We TiVo a lot. My husband is in charge of the TiVo. He TiVos sports events and a lot of series that he watches. We have a lot backed up.

What do you make of the Oscars only nominating male directors again this year?

I think it’s really a shame, especially because there were so many notable films this year by women directors. And you know, I know they’re making an effort, and I applaud them for their effort. But I really hope that it’s not just an effort; it produces some results and the work that women are doing and the importance of it is recognized by the Academy every year.

Did you have a favorite movie from last year?

Well, I loved “Little Women.” So I thought [director Greta Gerwig] should have been nominated. I really thought she deserved it because I thought it was beautifully done. And the way that it was constructed, made the best use of the book. I also just saw “The Report,” which is a heavy movie, but one that I really wish more people would see, because it lays out pretty clearly what went on during the war in Iraq. I saw “Knives Out,” which I thought was a lot of fun. I don’t get to go as often as I’d like to, but those are the three most recent.

Do you know who you’re going to vote for in the 2020 Democratic primary? You don’t have to name who it is.

I’m going to vote. I’m going to leave it at that. I’ll definitely vote. I vote every time there’s an election. And I am telling everybody here at Sundance, everywhere I go, please, please go out and vote. And then, whoever the nominee is, support the nominee, whether it’s someone you voted on or not in the primary process, because the most important responsibility we all have is to retire Donald Trump.

I know you’re not running for president, but do you ever feel the urge to think: “I could beat Donald Trump if I were running.”

Yeah. I certainly feel the urge because I feel the 2016 election was a really odd time and an odd outcome. And the more we learn, the more that seems to be the case. But I’m going to support the people who are running now and do everything I can to help elect the Democratic nominee.

I have one last question. There was a lot of online attention about the line in the documentary where you said “nobody likes” Bernie Sanders. But I feel like the context got lost, because you were talking about his time in Washington D.C. and how the press treated you versus him in 2016. Could you clarify that?

I think we did that interview about a year and a half ago. I wasn’t thinking about the election by any means. I’ve said I’m going to support the nominee. But I do think it’s important to look at somebody’s record and look at what they’ve gotten done and see whether you agree with that or not. I think that’s what every voter paying attention should do.