Continue to Variety SKIP AD
You will be redirected back to your article in seconds
Feb 11, 2020 10:46am PT

Harvey Weinstein Says His Walker Isn’t Fake, Sarcastically Tells Reporters ‘I’ll Have a Race With You’ 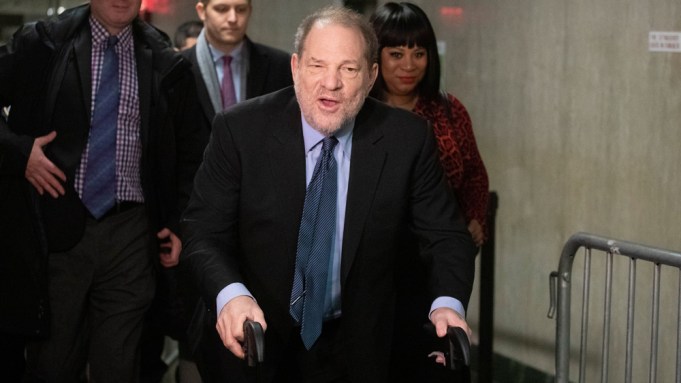 Walking out of court on Tuesday afternoon, Harvey Weinstein shot down rumors that his walker is fake.

“I’ll have a race with you,” he sarcastically quipped to reporters, in response to the press questioning whether his walker is a prop.

Ever since his trial began, Weinstein’s walker has been a constant subject of discussion, with many questioning whether the walker was a bid for sympathy, or a prop to showcase the once heavy-set, overbearing power player as a more feeble, weak man.

Many social media users have compared Weinstein to the imprisoned Bill Cosby, who revealed he was blind days before his sexual assault trial began.

Throughout the accusers’ testimony, the prosecution has repeatedly reminded the jury that Weinstein used to weigh around 300 pounds, and that the women accusing him of sexual assault and rape were no match for him. All of the women were asked to state their height and weight at the time of their alleged sexual assault, and a pattern was established, where many of the women said Weinstein forced them onto a bed and got on top of them so that they could not fight back.

The former movie mogul first hobbled into court with a cane in early December when he was forced into court for a bail hearing. He then upgraded to a walker, after he underwent back surgery in mid December for an injury he sustained after a car crash in August.

Earlier in the trial, Weinstein’s lead attorney Donna Rotunno criticized the media’s coverage of Weinstein’s walker. “I was dismayed to see all the press coverage incorrectly stating that Mr. Weinstein was trying to garner sympathy at his court appearance last week,” Rotunno said in December. “Mr. Weinstein was in a serious car accident in August, which resulted in a concussion and has now necessitated the need for back surgery later this week. He has been using a walker to assist him as the back pain has increased. He wanted to leave the walker in the car so it did not appear that he was looking for sympathy, as he is not. The press surrounding his physical condition is mean spirited and false.”

Weinstein, in upbeat spirits on Tuesday afternoon, chatted with reporters about his walker on his way out of Manhattan Supreme Court, just moments after his defense team rested their case, and confirmed that Weinstein will not take the stand himself. “Obviously, he pleaded not guilty,” Weinstein’s lawyer told the judge. “The state hasn’t met their burden and he’s not going to testify.”

Closing arguments begin this Thursday, and the jury will begin deliberation next Tuesday, marking the beginning of the end of the trial, which commenced on Jan. 6. Weinstein has been on trial for rape, and faces life in prison for five sex crimes charges in New York. He also faces separate charges from the Los Angeles District Attorney.

Asked was he thinking of testifying? Harvey said, “I was.”

Asked if his walker is fake? Harvey smiled, laughed and sarcastically said, “I’ll have a race with you.” pic.twitter.com/QSBPFRhAL7