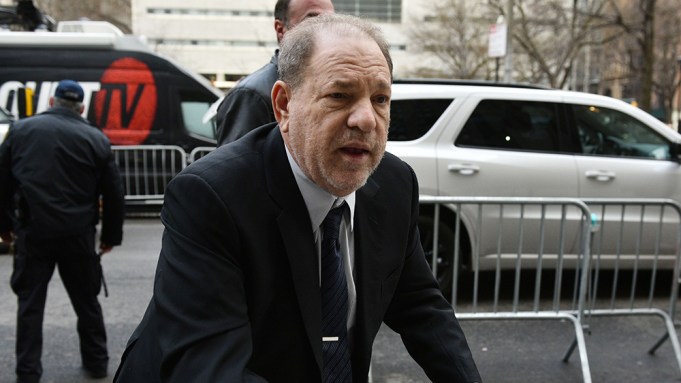 Harvey Weinstein has been sentenced to 23 years in a New York State prison on charges of sexual assault and third-degree rape and will be formally registered as a sex offender. It’s the culmination of a stunning fall for a man who was one of the most influential and powerful figures in Hollywood.

Before the sentencing was delivered, Weinstein addressed a packed Manhattan courtroom and said he had “deep remorse.” But he showed little contrition. In a rambling speech he also pushed back at the #MeToo movement, implying that it had gone too far, while talking up his charity work.

“I am totally confused,” he said. “I think men are confused about all of this…this feeling of thousands of men and women who are losing due process. I’m worried about this country.”

“This is not the right atmosphere in the United States of America,” Weinstein added.

Weinstein said he had “serious friendships” with the two primary accusers in the case, Miriam Haley and Jessica Mann. Both women delivered “victim impact” statements before Burke issued the sentence. Haley, who says she was sexually assaulted by Weinstein in his apartment in 2006, told the judge that she was left emotionally damaged by the incident.

“It scarred me deeply, mentally and emotionally,” she said. “What he did not only stripped me of my dignity as a human being and a woman, but it crushed my confidence.”

Mann, who testified that Weinstein raped her over the course of an abusive relationship, said his abuse had also had a negative impact on her life.

“I don’t know how to explain the horrors of being raped by someone who has power,” Mann said. “The impact on the psyche is profound. Rape is not just one moment…it is forever.”

As Mann and Haley spoked, Weinstein looked on, appearing to be in a state of stunned disbelief. Afterwards, he apologized to both women.

Weinstein’s attorney Donna Rotunno pushed back at Mann and Haley’s characterization of the former mogul as an all-powerful figure. His wealth and celebrity, she implied, had actually hurt his case.

“You have this idea that having fame and fortune and money at his fingertips is positive,” Rotunno said. “But in many ways, having that life and have every single move that you make be scrutinized by the media…shows that there is a pressure that goes along with that lifestyle that is probably not something that everybody would want.”

She went on to argue that Weinstein’s role in bringing award-winning hits such as “Shakespeare in Love” and “The English Patient” to the screen had made him a target.

“He built careers, and because he’s known as someone who did that, everyone wanted a piece of him,” said Rotunno, who noted that Weinstein was responsible for “80-plus Oscars.”

“That is not a small feat,” she said.

In a press conference after the sentencing was delivered, Rotunno said that Weinstein’s punishment was “obscene.”

Haley and Mann were sitting in the front row of the court room for the sentencing, flanked by Tarale Wulff, Dawn Dunning, Lauren Young, and Annabella Sciorra, all of whom testified in the trial about Weinstein’s assaults. Mann used her address to respond to suggestions by Weinstein’s legal team that the fact that she remained in touch with the producer after the alleged rape.

“As his lawyers twist the truth, and even lie, I swore to come here and tell the whole truth, only to be asked yes or no questions,” Mann said. “There is still so much left unsaid about his abusive relationships.”

“I wish I had been able to fight him,” said Mann. “I want to remind you I told Harvey ‘No’…I thought I would be able to assert my no and reserve the right to my autonomy.”

In court, Assistant D.A. Joan Illuzzi argued that Weinstein’s conviction demonstrated that his money and influence were not able to subvert the justice system.

“Every argument that could’ve been made on his behalf was made, and the system worked,” she said.

Illuzzi also praised Haley and Mann for coming forward with their allegations.

“The defendant would never have been stopped from hurting and destroying more lives,” she said. “Every one of these women represents the strength and fortitude of every moral person who stands up and says, ‘Enough.’”

Last Friday, Illuzzi asked the judge to send a message that sexual assault is “a serious offense worthy of a lengthy prison sentence.” She also asked Burke to consider 36 uncharged allegations, including rape, harassment, bullying, and workplace violence, in handing down the sentence. In court, she pressed Justice Burke to give Weinstein the maximum sentence.

“[Weinstein] made movies,” she said. “He got to go to parties…he walked the red carpet and mingled with all the stars…and he held the dreams of many people in his hands…and how did he use that power? He got drunk off that power.”

Weinstein has been held since last Thursday at Rikers Island, but will soon be turned over to the New York State Department of Corrections and Community Supervision.

Weinstein’s fall in October 2017 led to an industry-wide reckoning in the entertainment business. It was one that saw other high-profile Hollywood figures such as Les Moonves, Kevin Spacey, Charlie Rose, Brett Ratner, and Bryan Singer accused of sexual misconduct. The allegations, published by the New York Times and the New Yorker, made against Weinstein were far more expansive than the criminal charges he faced. He was accused of assault and harassment by dozens of women. On Wednesday, the Silence Breakers, a group of Weinstein accusers that includes actresses Ashley Judd, Rose McGowan, and Rosanna Arquette, said that it would continue to push for cultural change.

“Harvey Weinstein’s legacy will always be that he’s a convicted rapist,” the group said in a statement. “He is going to jail – but no amount of jail time will repair the lives he ruined, the careers he destroyed, or the damage he has caused.”

Mackenzie Nichols contributed to this report.