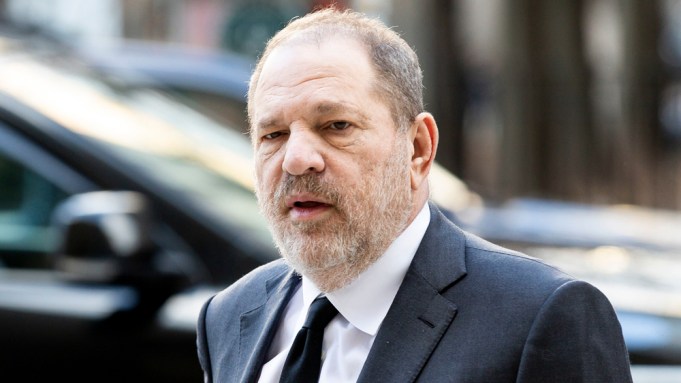 Harvey Weinstein once waltzed into every room in Hollywood as the king of the movie business. Now, he’s shuffling into New York City criminal court with a walker, facing life in prison for five sex crimes charges, including rape.

Looking back at Hollywood history, has there ever been a case quite like this?

Weinstein’s trial stands on its own, according to veteran journalist Ken Auletta, who first profiled the fallen movie mogul nearly two decades ago.

“If you go back in movie history there are untold examples of abusive behavior by studio heads — the casting couch, which is the phrase that Harvey used — and there was a casting couch, and young starlets succumbed, in exchange for roles in movies,” Auletta said. “But very rare was the incidents of these studio heads actually raping a woman and doing some of the things that Harvey Weinstein is accused of doing. So that’s different.”

In 2002, Auletta wrote a Weinstein profile for The New Yorker, titled “Beauty and the Beast.” Auletta wasn’t able to break the story at the time because he lacked sources willing to speak on the record. He tried twice more over the years, but was stumped again with sources. When Ronan Farrow reported allegations against Weinstein in 2017, at the same time as Jodi Kantor and Megan Twohey of The New York Times, it was Auletta who helped Farrow cross the finish line.

Auletta is currently at work on a biography of Harvey Weinstein, set to be released in 2021. He’s conducted over 100 interviews for the book, and for his continued research, he’s sitting in court every day of Weinstein’s criminal trial in New York City.

When looking back at Hollywood scandals, Auletta says that the stakes of Weinstein’s trial are unheard of, noting the consequence of losing the trial is life imprisonment with the minimum sentence for rape being 20 years to life.

The biggest question is how the jury will react to Weinstein, whose name has been plastered across the media, as the poster child of the #MeToo movement for the past two years.

“It’s not a foregone conclusion that Harvey Weinstein is going to be declared innocent or guilty. We don’t know that yet,” Auletta said, adding that Weinstein’s defense team will have to “attack the women’s credibility on the stand, in order for Harvey to be exonerated.”

Civil attorney Ari Wilkenfeld, a partner at the Washington D.C. based firm Wilkenfeld, Herendeen & Atkinson, who has never worked with Harvey Weinstein and has no involvement with his trial, also says the jury will be the biggest challenge of the trial because of the “he said, she said” nature of rape cases.

“In cases where there are ongoing relationships or interactions between the alleged victim and the alleged accused, it’s always a problem,” Wilkenfeld said, predicting that Weinstein’s legal team will utilize evidence of communication between Weinstein and his accusers to try to prove that sexual relationships were consensual.

“Victims of sexual violence [or] assault at work, they often behave in ways that seem counterintuitive to people who have never been victimized,” Wilkenfeld said. “They may maintain a romantic relationship with the person who harmed them, which would seem to indicate that there was no problem. When people are assaulted either by a family member or a co-worker or anyone that belongs to a community in which they have to regularly interact, there is enormous pressure on the victim to figure out some way to make the original act go away, to clean it somehow — that’s one of the harder things to explain to the juror.”

As far as jury selection, which is currently underway and has been since the trial began on Jan. 6, Wilkenfeld believes the prosecution is looking for individuals who have heard about the case and have well-formed opinions about it, while the defense will be looking for jurors who have not formed a strong opinion yet about the case and are more “rigid” in their beliefs about how victims behave.

Wilkenfeld has represented female clients in high profile scandals throughout the #MeToo movement, including Brooke Nevils, who accused Matt Lauer of rape, and Linda Vester, who came up against Tom Brokaw with sexual harassment allegations. He says the emotional turmoil victims endure as they prepare to come forward with their allegations, let alone tell their story on the stand where they know they’ll be scrutinized under the microscope of international media coverage, is excruciating.

“What you ultimately end up with is a swearing contest,” Wilkenfeld said. “Both witnesses get sworn in, they’re telling completely divergent stories and you have to convince the jury that your client is telling the truth through a combination of having incredible testimony from your client and also being able to punch holes in the other side’s client is how these cases are won and lost.”

A tactic used by defense attorneys in harassment trials is, as Wilkenfeld puts it, “horrifically called the ‘nuts and sluts offense.’ He elaborated: “If you’ve got a victim, you make her look like she is either mentally deranged or promiscuous or some other way asking for it, but not to be trusted.” Wilkenfeld said that tactic is not used as often as it used to be in courts, but he’s curious to see Weinstein’s team strategy.

The judge presiding over the trial, Justice James Burke, has enabled the Molineux Rule, which will allow additional women, aside from the two primary accusers, to testify, so that the prosecution can establish a pattern of Weinstein’s sexual predatory behavior.

“That’s a setback for Harvey,” Auletta said, noting the rule became a defining moment in the jury’s mind when it was invoked during the Bill Cosby case.

The primary accusers in the case are the Gloria Allred-represented Mimi Haleyi, a former Weinstein Company production assistant who has accused Weinstein of sexual assault, alleging that he forcibly performed oral sex on her in 2006, and an unnamed woman who alleges rape from an incident in a hotel room in 2013. If convicted, Weinstein faces life in prison. Separate from the five New York charges, Weinstein is also facing rape charges in Los Angeles.

While Weinstein’s fate won’t be determined for more than a month (Burke has warned jurors the trial will likely last until Mar. 6), experts say that regardless of the outcome, the trial will have lasting impact on Hollywood.

If Weinstein is not convicted, Hollywood will be up in arms and feminist groups will erupt in outrage and protest, but Auletta believes the fallen producer will try to get back into the movie business.

“That’s what he loves. That’s what he’s good at,” Auletta said. “It will be very hard for him to navigate that road back, however, because whatever happens in the criminal trial, the public believes he’s a predator. I can’t imagine him succeeding and people wanting to be in business with him.”