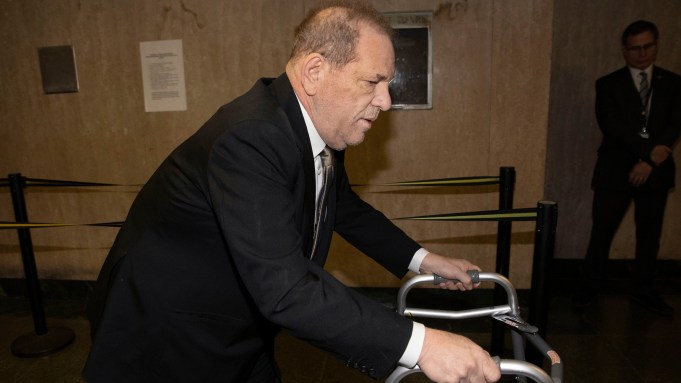 Attorneys for Harvey Weinstein want reporters barred from jury selection for the movie producer’s rape trial in New York. The lawyers filed a new motion on Friday asking for individual jury selection — a move that was swiftly denied by Justice James Burke.

“Most people do not speak in front of the international media,” argued Weinstein’s attorney Arthur Aidala. “That’s not a normal case. I don’t think there is any other case in this building where a juror is going to say something and it’s going to be [reported in the press].”

The request for individual jury selection resulted in a contentious back and forth between Aidala and Burke. Presenting a motion to the judge, Aidala initially said, “After we conclude this type of dwindling down of the jury, we think it’s in both sides’ best interest — what has been done in other high-profile cases — to do individual sequestered jury selection.”

Asking the judge to at least read the motion, Burke said he would read it carefully over the weekend, but could not imagine changing his mind.

“Does it involve the public and the press not being able to be involved in the process of jury selection?” the judge asked with skepticism. “If there is something [a juror] needs to talk about privately, in that case, we may well do so. … What are you asking for? This is a really, really long letter, if that’s what you’re asking for.”

“I’m asking for more than that judge,” Aidala replied. “Can the court just read it?”

“That’s against the law!” Burke exclaimed, in response to the request for individual jury selection. Holding the paperwork, he then added, “I’ll read this, but I’m generally familiar with this area of the law.”

Glancing at the motion, the judge said he had read one paragraph. “I see that this is an end run around my ruling,” he noted.

At another point, Burke told Aidala, “I disagree with you on virtually every level.”

Weinstein’s trial commenced Monday and his legal team has taken pains to paint the proceedings as a media circus, one that prevents their client from getting a fair hearing. On Friday, they argued that potential jurors deserve privacy because they are going to be asked about personal matters such as their history with sexual assault. Aidala went on to argue that prospective jurors’ responses could prejudice other prospective jurors’ opinions.

Burke, whom Weinstein’s lawyers had unsuccessfully tried to have recused from the case, didn’t seem to buy the argument. He noted that potential jurors always have the option of choosing to answer questions confidentially and also appeared unmoved by the suggestion that potential jurors could be unduly influenced by the opinions of other members of the jury pool.

“Jurors blurt all matter of things out that are not great and are not desirable for entire jury panels to hear, and that is every jury selection,” said Burke. “It does not affect their [opinion] … that is just a truism of our system of justice.”

Aidala’s motion quoted from social media posts from some prospective jurors, arguing that some have not been candid in claiming to be impartial. One member of the jury pool tweeted on Tuesday: “If anyone knows how a person might hypothetically leverage serving on the jury of a high-profile case to promote their new novel… dm me, please.” The tweet has since been deleted.

Weinstein faces five charges stemming from accusations that he raped a woman in a hotel room in 2013, and forcibly performed oral sex on another woman in his apartment in 2006. Weinstein says any sexual activity was consensual. If convicted, he faces life in prison. He is also facing rape charges in Los Angeles.

Lawyers in New York will screen 118 potential jurors on Friday, as they try to find a bench of 12 jurors and six alternates. Following the same drill as the rest of the week, media was asked by the court to sit outside of the courtroom during the jury selection process and was strictly told not to take any photographs of the potential jurors as they were whisked into the courtroom past reporters in the hallway.