Continue to Variety SKIP AD
You will be redirected back to your article in seconds
Feb 18, 2020 8:45am PT 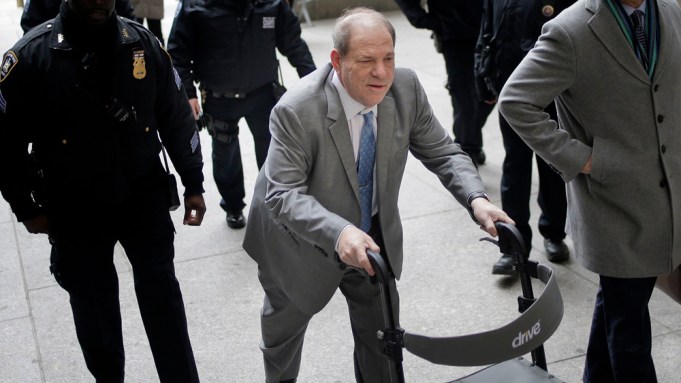 Jury deliberations in the rape trial of Harvey Weinstein began Tuesday. After a six-week trial, a 12-member panel of New Yorkers will now decide if the former movie mogul goes free or spends the rest of his life behind bars. The case is considered to be a landmark moment for the #MeToo movement in Hollywood, as Weinstein’s fall helped trigger an industry-wide reckoning.

Weinstein, once a major force in indie film as the producer of “Shakespeare in Love” and “The King’s Speech,” faces five criminal charges. These stem from the allegations brought on by Jessica Mann and Miriam Haley, who both testified. Since the monumental trial began on Jan. 6, six women have been called to testify, including actress Annabella Sciorra, in order to prove a pattern of predatory sexual assault, but the main charges rest on the testimonies of Mann and Haley, who have accused Weinstein of rape and sexual assault.

Burke, who Weinstein’s attorneys have repeatedly claimed was biased and have tried to get kicked off the case, went on to tell jurors that prosecutors had to prove “beyond reasonable doubt” that Weinstein committed a crime.

“The law does not require people to prove guilt beyond all possible reasonable doubt,” he said. “Reasonable doubt is an honest doubt. It is an actual doubt, not an imaginary doubt. You should be guided by full and fair evidence.”

Attorneys for Weinstein attempted to get one juror, a white, female author, dismissed from the case and replaced by an alternate. She was reading a book on child abuse, which they claimed was a conflict. Burke ruled she could remain on the jury.

Mann, who was embroiled in a complicated relationship with Weinstein, has accused him of rape in 2013 in a New York City hotel room. Haley, a former “Project Runway” production assistant, accused Weinstein of forcibly performing oral sex on her, in his New York City apartment in 2006, where she thought she was meeting him for business purposes. Sciorra testified that Weinstein raped her in the early 1990s, after showing up to her apartment unannounced.

Burke said jurors must weigh whether these witnesses were “consistent or inconsistent” and “plausible or implausible.”

“You should draw on the experience of your everyday lives [in making that determination],” Burke advised.

“Your verdict on each count you consider much be unanimous,” Burke added. “To reach a unanimous decision, you must discuss with each other and reason together respectfully.”

Weinstein could be convicted or acquitted on all charges or found guilty or not guilty of others, posing a potentially complex outcome. If convicted on all five charges, the maximum sentence is life in prison.

During closing arguments, Weinstein’s defense illuminated holes in the women’s testimony, aiming to prove that the female accusers wanted to engage in a consensual relationship with Weinstein for their own personal and professional benefit. Donna Rotunno, his lead attorney, said women need to be held accountable for their own choices. The prosecution, led by Manhattan Assistant District Attorney Joan Illuzzi, argued that Weinstein is a rapist and a serial predator who used his power and position in Hollywood to abuse and sexually assault women.

The 12-member jury is composed of seven men and five women, including six white men, one black man, two black women, two white women and one woman who is black and Latino.