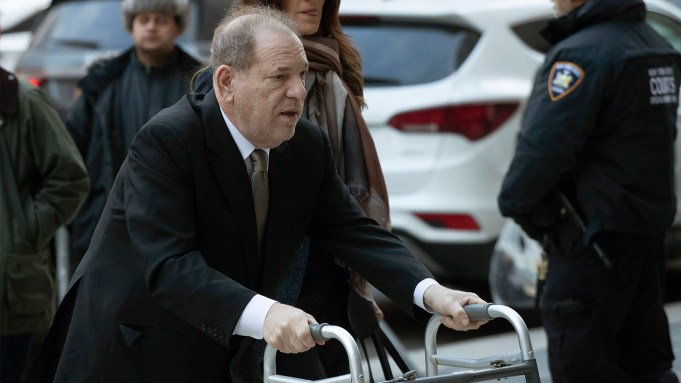 Harvey Weinstein struck out in his attempt on Thursday to get a new judge assigned to his rape trial in New York.

Attorneys for the movie mogul accused Justice James Burke of being prejudicial after he threatened Weinstein earlier this week with jail time for using his cell phone in court. However, Burke was having none of it and refused to step down.

On Tuesday, Burke scolded Weinstein, telling him, “I could not implore you more not to answer the following question: is this really the way you want to end up in jail for the rest of your life, by texting in violation of a court order?” In a motion, Weinstein’s lawyers said Burke’s warning was “prejudicial and inflammatory” and was shaping a media narrative about the movie producer’s guilt.

On Thursday morning, lead Weinstein attorney Donna Rotunno told Judge Burke she believes the court to be biased. “Obviously, Judge, Mr. Weinstein is not going to prison for the rest of his life, based on the fact that he was using his cell phone.”

In response, Burke shot back, “All I meant to do was scare him enough for him to discontinue using his phone,” clarifying, “I certainly never actually meant that I was going to put your client in jail for life, nor did I mean that I had pre-judged whether he is guilty or not guilty or innocent of the charges…the court does not know the verdict and has not made a call on what it might or might not be… I certainly don’t know what the evidence is likely to be or how it’s likely to be perceived by the jurors.”

Burke denied the motion immediately and spent over 15 minutes speaking to Weinstein’s defense, holding nothing back. “I have to say that I did enjoy your motion, especially your inserted photographs. I don’t often get those creations,” Burke quipped, referring to the eight-page recusal motion filed yesterday by Weinstein’s team. “But in any case, more seriously, thank you for making the motions so I could have the opportunity to clarify… Let me first just state the obvious. There is nothing prejudiced or inflammatory about scolding a defendant for repeated violation of the courtroom,” he said of condemning Weinstein for cell phone use.

Noting that Weinstein’s defense team has changed multiple times, so his current legal team was not present for all of the slaps on the wrist for cell phone use, Burke said Weinstein has violated the cell phone rule “on at least three occasions in court” and was “non-compliant to court officers when asked to put away his phone.”

Throughout his lengthy remarks, Burke repeatedly explained why he believes he has proven he is handling the trial fairly. “I have extended myself to figure out bail conditions, which are keeping your client at liberty,” he said. Later, he added, “I am going to great lengths to afford your client the fair trial that he deserves, which I believe are evident in many of the rulings I have made.”

Earlier in the week, Weinstein’s lawyers requested to delay the New York trial, given new charges filed against the movie producer in Los Angeles. On Thursday, Burke doubled down on his decision to not delay the trial in wake of the L.A. charges, saying, “There is no time like the present to go forward. All sides are ready.”

Burke also took exception to Weinstein’s legal team’s attempt to paint the courthouse as a “circus-like” atmosphere, one that made it impossible for their client to get a fair trial.

“There has not been a carnival atmosphere,” Burke said. “Everybody has been very well behaved. And as for inside the courtroom, it has been a very modest and moderate atmosphere. The press are to be applauded on how well they have maintained themselves. They have done absolutely nothing thus far to cause any stir.”

The courtroom was only half full on Thursday, although initial hearings did attract a flurry of reporters and photographers.

Weinstein’s team also requested to have more time with jurors, which was shot down by Burke, who said 15 minutes was an adequate amount of time, given that potential jurors go through a three-part vetting, ahead of their time with Weinstein’s defense, including screening potential jurors to make sure they are fair and impartial.

“Fifteen minutes is, in the first place, enough time in this or any other case,” Burke said. “The actual issues in this case are not any different than any other case.”

Speaking to Weinstein’s team, the judge added, “What a delight for a trial attorney to be able to start with potential jurors who are fair and impartial and have no scheduling conflicts — so lucky you; you probably only need five minutes.”

One hundred twenty people came into the courtroom on Thursday, but were released early and will return again on Friday. Court was adjourned early, due to lead prosecutor Joan Illuzzi needing to leave for a doctor’s appointment to tend to a medical issue.

Outside the courthouse in the early afternoon, Weinstein’s attorney Arthur Aidala told reporters this trial marks the first time in his 30-year career he has asked a judge to recuse himself. “It’s a big deal,” he told Variety.

Weinstein is facing life in prison over criminal charges that he raped woman in a New York hotel room in 2013, and forcibly performed oral sex on another woman in his Manhattan apartment in 2006. That’s not his only legal issue. Los Angeles prosecutors charged Weinstein on Monday with raping one woman and sexually assaulting another in 2013. He faces up to 28 years in prison if convicted.

The Weinstein trial in New York is struggling to find jurors who are willing to be impartial. There’s been a swirl of media coverage around the mogul since dozens of women came forward in 2017 accusing him of sexual abuse and assault. Nearly 100 potential jurors have already been dismissed with many claiming they had already decided that Weinstein was guilty.