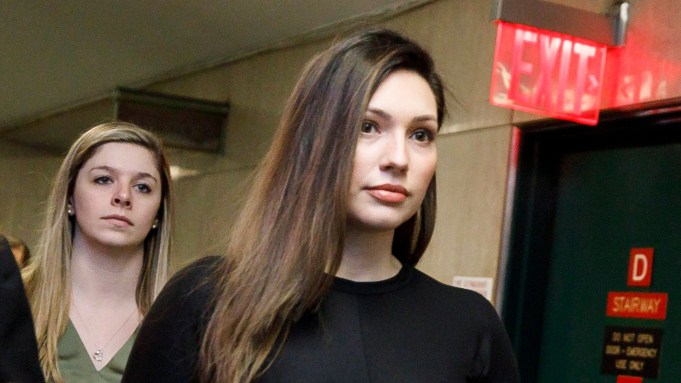 A key witness in the Harvey Weinstein trial took the witness stand for a third day on Tuesday, a day after the trial was halted when she broke down in sobs during cross-examination.

Jessica Mann, who claims that Weinstein sexually assaulted her on two separate occasions, testified that she also caught Weinstein trying to film them having sex.

“He had his cell phone with the camera facing this way,” she said.

Weinstein’s attorney Donna Rotunno asked how she reacted. “I freaked out,” she responded.

Rotunno asked if Mann ever saw any footage from the time Weinstein allegedly filmed her during a sexual encounter. Mann said she has never seen any footage.

Last Friday, on the first day of her testimony, Mann revealed explosive details on the stand, giving a glimpse into Weinstein’s alleged sexual appetite, which included him asking to film her during sex.

During her testimony, Mann also said that Weinstein compared Mann to other “kinky” actresses, shared his sexual fantasies with her, role-played and needed to inject medication into his penis to have an erection. She also said Weinstein once urinated on her with a “golden shower,” which she called “gross” and shocking. Mann recalled Weinstein once asking her, “Do you like my big, fat Jewish d—?”

Mann also shared in her testimony that Weinstein’s genitalia looked “deformed” and she first time she saw him fully naked, she thought he was intersex. “He does not have testicles and it appears like he has a vagina,” Mann said on the stand on Friday. On Monday in court, defense attorneys showed evidence of an email when Mann wrote to her ex-boyfriend, “Harvey no longer has a penis…I never asked what happened.”

Mann was pressed about why she continued to have a relationship with Weinstein after he allegedly raped her. She has admitted that they had sex on several occasions, but claimed she was scared about breaking off contact with Weinstein, who was one of the most powerful figures in Hollywood.

Mann is one of two key witnesses in the criminal case against Weinstein. The movie producer, whose credits include “Shakespeare in Love” and “Lion,” is charged with rape, criminal sexual act and two counts of predatory sexual assault related to Mann’s allegations and those of Miriam Haley, a former production assistant. He faces life in prison if convicted.