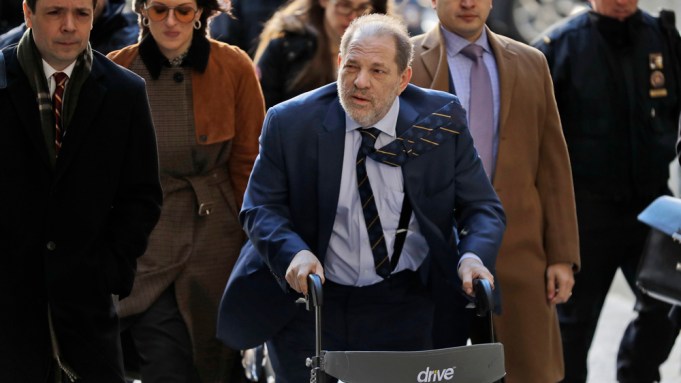 Harvey Weinstein was a serial rapist who used his status as a Hollywood power broker to prey on women, Manhattan Assistant District Attorney Joan Illuzzi told jurors on Friday.

In her closing argument, Illuzzi called Weinstein “the master of his universe,” and described the six women who have accused him of rape and sexual assault as “ants that he could step on.”

“When Harvey Weinstein met the witnesses, he looked quite different than he does today,” she said. “They were scared. They felt isolated and they were alone.”

Throughout her argument, Illuzzi sought to stitch together the similarities in the women’s accounts. She said that several felt they were “tricked” into entering a hotel room or an apartment where Weinstein proceeded to assault them.

“If you have to trick someone, it’s not consent,” Illuzzi said.

Weinstein faces five counts of rape, predatory sexual assault and criminal sexual acts. He is accused of raping Jessica Mann, an aspiring actress who now works as a hairdresser, at the DoubleTree Hotel in 2013. He is also accused of forcibly performing oral sex on Miriam Haley, a former “Project Runway” production assistant, at his Soho apartment in 2006. The prosecution called four additional witnesses to buttress those claims, including actress Annabella Sciorra, who accused Weinstein of raping her at her apartment in late 1993 or early 1994.

In the defense argument on Thursday, attorney Donna Rotunno argued that Sciorra made the allegation to revive her career. Illuzzi countered that, saying that Sciorra was forced to reveal painful secrets about her addiction and self-harm.

“To have to tell you that she was cutting herself and then dabbing her blood with a tissue and putting it on the wall with gold leaf… do you think that’s a career booster?” Illuzzi asked.

She argued that each of the women had revealed painful secrets in hopes that the jurors would believe their allegations.

Illuzzi spent considerable time defending Mann, who testified over the course of three grueling days that Weinstein had raped her on two occasions. Mann conceded that she had also had consensual sexual “role-play” with Weinstein, and had sent him loving emails over the course of several years.

“The question is not whether Jessica Mann made a bad decision,” Illuzzi said. “The question for you is whether or not Jessica is lying. If she’s telling you the truth, she’s the victim of rape.”

Illuzzi argued that Weinstein did not treat Mann like a mistress, and had never sent her gifts, bought her jewelry, or taken her on trips.

“This was not a relationship — this was Jessica Mann as Harvey Weinstein’s rag doll,” she said. But even if it were a loving relationship, she said, that would be irrelevant. “She could have had his name tattooed on her arm. She could have been writing him love notes every single day… It still wouldn’t make a difference. He still wouldn’t be allowed to rape her on March 18, 2013.”

Illuzzi also stressed that the women went to parties and hotel suites because that is how the acting profession works, and not because they were pursuing a romantic relationship with Weinstein.

“These people, all of them, are navigating a very difficult industry,” Illuzzi said. “Their work looks like it’s play — it’s not! It’s work. And it’s work that supports them and their families. Going to parties sounds like its fun. It’s networking every single time.”

On Thursday, Rotunno painted a starkly different portrait of the former mogul. She claimed that Weinstein’s accusers were trying to evade responsibility for their actions and were being dishonest about their relationship with the producer. Rotunno argued that both Mann and Haley had used Weinstein to advance their careers, pointing to the affectionate emails they sent the producer after the alleged assaults.

“What are we doing to women?” she asked. “Women have choices.”