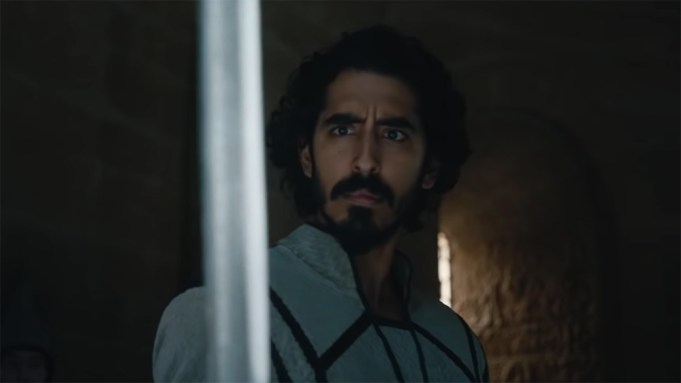 A24 debuted a mysterious and fantastical trailer for Dev Patel’s upcoming film “The Green Knight,” a take on the 14th century poem “Sir Gawain and the Green Knight.”

Patel, portraying Sir Gawain, King Arthur’s nephew and Knight of the Round Table, battles the monstrous green-skinned creature in the new footage.

“I fear I’m not meant for greatness,” Patel’s Sir Gawain says, to which an ominous voice responds: “We all fear, but fear can be a gift.”

Later in the trailer, Sir Gawain’s head is seen engulfed in flames, laying in the forest tied up and gagged next to a skeleton, while facing a ghostly hand popping up from the side of a mountaintop through the mist.

David Lowery directed “The Green Knight,” which also stars Joel Edgerton, Barry Keoghan, Ralph Ineson and Alicia Vikander. A24 previously teamed with Lowery on 2017’s “A Ghost Story.” His other credits include “Ain’t Them Bodies Saints,” “Pete’s Dragon” and “The Old Man & the Gun.”