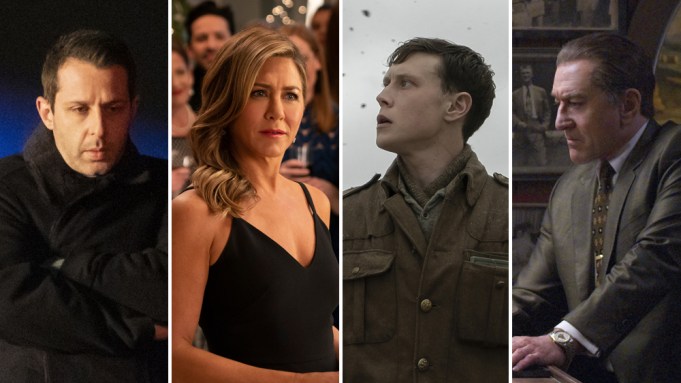 It was bound to be an unpredictable night when Ricky Gervais stepped onstage to host the 77th annual Golden Globe Awards at the Beverly Hilton on Sunday, but the shock didn’t stop at responses to his jokes.

The first big surprise of the night came right at the top of the show with the first award (TV musical/comedy actor) being handed to first-time nominee Ramy Youssef. While it certainly set the tone to expect the unexpected, not every category went that way. “Fleabag” and its creator and lead actress Phoebe Waller-Bridge walked away with the comedy series and TV musical/comedy actress trophies, respectively, following their Emmy wins in September, while Michelle Williams followed her own Emmy win with the Globe for limited series/TV movie actress for “Fosse/Verdon,” and HBO’s Emmy-winning “Chernobyl” picked up the limited series/TV movie trophy.

Meanwhile, on the film side, the big shock was that streamer Netflix went into the evening with 17 film nominations and walked away with only one win — for Laura Dern in “Marriage Story.” It was “1917” that pulled out a couple surprise wins for best picture and director Sam Mendes, who bested “Parasite” filmmaker Bong Joon Ho.

SNUB: “The Irishman”
Martin Scorsese’s acclaimed gangster drama went into the evening with five nominations for picture, director, screenplay and two supporting actor nods. Only “Marriage Story” had more nominations, with six, but at least that film nabbed a prize for supporting actress Dern. At the end of the long night, “Irishman” went home empty-handed.

SURPRISE: “1917,” Best Picture, Best Director
Every major predictor pointed to Bong Joon Ho taking home the director prize on Sunday — though either a Scorsese or Quentin Tarantino win wouldn’t have been a shock. But it was Sam Mendes who triumphed with his WWI epic “1917.” That proved to be a sign of things to come, when “1917” became the best picture drama winner about an hour later.

SURPRISE: Taron Egerton, Best Actor, “Rocketman”
Not a total shocker as Egerton’s performance as Elton John has been universally praised and he’s been working the circuit tirelessly. Still, the relative newcomer bested the biggest star in the world (Leonardo DiCaprio in “Once Upon a Time in Hollywood,” which also won best picture in the musical/comedy category) and the likes of comedy powerhouse Eddie Murphy in “Dolemite Is My Name.” An Oscar nomination in a wildly crowded field is looking more and more possible for Egerton.

SURPRISE: “Missing Link,” Best Animated Feature
It only made $26 million worldwide (less than all its competitors made on their opening weekends), but Laika’s fifth film, a sweet and funny tale about a Sasquatch looking for his relatives, triumphed over competition that included three Disney films (“The Lion King,” “Frozen II” and “Toy Story 4”) and DreamWorks’ “How to Train Your Dragon: The Hidden World.” Even screenwriter/director Chris Butler and producer Arianne Sutner seemed surprised by their victory.

SNUB: “Jojo Rabbit”
The HFPA spread the wealth around fairly well over the evening, but Fox Searchlight’s big entry wasn’t able to land a win from its two nominations, for star Roman Griffin Davis or in the best picture musical/comedy category. While they were up against some heavy competition, many still favored the dark comedy (which won the Toronto Film Festival audience award) to take best picture.

SNUB: Andrew Scott, “Fleabag”
The Irish actor was heavily favored to win by industry prognosticators leading up to the show. After all, he was a rare member of the “Fleabag” cast who had yet to receive an Emmy nomination for his work in the second season of Amazon Prime Video and Phoebe Waller-Bridge’s comedy series, and the HFPA does love to be the first to celebrate performers (especially international ones).

SURPRISE: Ramy Youssef, “Ramy”
The comedian created his self-titled Hulu series that he also stars in, writes, produces and directs, and received much critical acclaim when it launched in April 2019. But after he wasn’t nominated at the Emmys, his nomination at the Golden Globes was a surprise in and of itself, even if it was a pleasant one. Taking the win — especially over “The Kominsky Method’s” Michael Douglas, an incumbent who has a long history with the HFPA that includes the prestigious Cecil B. DeMille Award — was the first surprise of the night.

SNUB: “The Morning Show”
The high-profile, high-budget drama series from Apple TV Plus was the only show of the new streamer’s six that launched in the eligibility window to score nominations (in the drama series category and in the TV drama actress category for both of its leading ladies, Jennifer Aniston and Reese Witherspoon). But the chance to celebrate not only a new show but also some beloved talent and a brand new platform was not enough this time around.

SURPRISE: “Succession”
Although the HBO drama has only become more beloved (and buzzy) as time has gone on, Netflix’s “The Crown” was predicted to win the drama series trophy this year after it won at the 2017 ceremony, was nominated again the following year but then sat out eligibility for last year’s awards. But “Succession” proved to be more powerful for the journalists of the HFPA after all. Brian Cox also took the TV drama actor trophy, which surprised even him; he apologized to his fellow nominees for winning, and admitted on stage that he thought “this would never happen to me.”

SNUB: Meryl Streep, “Big Little Lies”
The prolific veteran performer seemed a lock for the 10th Globe of her career (including the coveted Cecil B. DeMille Award, which she picked up in 2017). She stepped into the second season of HBO’s “Big Little Lies” as the contentious Mary Louise Wright, mother-in-law to Nicole Kidman’s Celeste, who fought for custody of her grandchildren. It was a new character created for the season, and Streep was much celebrated in the role — just not at this night. Instead, Patricia Arquette of “The Act” followed her supporting actress Emmy win with the Golden Globe.

SURPRISE: Ricky Gervais takes shots at the HFPA
Although everyone expected Gervais to make a lot of jokes at the expense of the actors and producers in the room at the Beverly Hilton, watching him aim many of his zingers at the organization that allowed him to host not only for a fifth time but also after a recent trans-phobic tweets controversy caused many raised eyebrows. In his opening monologue, he called the members of the HFPA “racist” when he pointed out that many talented people of color failed to receive nominations this year. Later in the show, he commented on the vegan menu at the awards ceremony, saying that it was “all vegetables, as are the members of the Hollywood Foreign Press.” Throughout the show, Gervais’ runner was that this was the last time he’d be hosting, so he doesn’t care about what he says. Whether or not the HFPA takes offense at these jokes and holds him to that prediction remains to be seen.