Golden Globes 2020: Taylor Swift to Beyonce, What You Didn’t See on TV 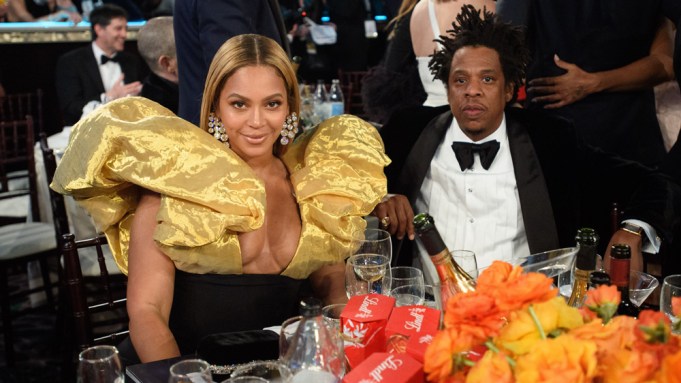 Often, the best moments at the Golden Globes don’t even make the telecast.

When you’re inside the Beverly Hilton, where the ceremony takes place, Hollywood’s first awards show of the year can feel like attending a high school homecoming game. There’s free-flowing booze. There’s lots of hugging and talking between the plays. And there’s a mad beeline to meet the most popular kids — Meryl Streep, Ellen DeGeneres and Renee Zellweger.

Here are the 13 biggest secrets from inside the ballroom at this year’s ceremony.

1. Who gets the best and worst seats?
There are multiple tiers of seating at the Golden Globes. The biggest A-list stars — Leonardo DiCaprio, Brad Pitt, Robert De Niro, Jennifer Aniston and Taylor Swift — are all seated on the floor of the Beverly Hilton ballroom. Then there’s a next tier — Billy Porter, Olivia Colman, Bong Joon Ho — who are in a second row of tables, farther away from the stage. Before the show started, Gillian Anderson was talking to DeGeneres, the recipient of the Carol Burnett Award, who had one of the best seats in the house. Anderson pointed up to the sky, to joke that her table was far away. And Quentin Tarantino, who had a very good seat, was heard complaining that all the producers and financiers who actually got the movies made were forced to sit in the back of the room — beyond the second-tier, there’s a third- and fourth-tier (several steps up) for the less famous attendees.

Gillian Anderson is telling Ellen and Portia how bad her seat is. She’s not on the floor of the #GoldenGlobes ballroom with many of the other A-list celebritites. pic.twitter.com/eblNvmf8DZ

2. There was no meat served
This year’s Golden Globes had its first all-vegan menu, which was an idea that came from best actor in a drama winner Joaquin Phoenix (“Joker”), an animal rights activist. When guests arrived inside the Globes, instead of the usual dinner of steak or fish, they were served chilled golden beet soup, oyster mushroom “scallops” with mushroom risotto and a chocolate opera dome for dessert. There was no meat backstage either, where the finger-food appetizers at the bar consisted of vegetarian sandwiches.

3. Everybody wants to say hi to Meryl
In the 20 minutes before the show starts, the floor of the ballroom is a mosh pit — as every famous person on the planet tries to say hi to other famous people. But obviously, there’s no one more bowed down to than Streep, recipient of 32 Golden Globe nominations. As Streep made her way to her table, she was first greeted by Michelle Pfeiffer and her husband David E. Kelley (who wrote “Big Little Lies”). Next, she said hello to Noah Baumbach, who is in a relationship with her “Little Women” director Greta Gerwig. She hugged Billy Porter. Finally, she stopped by Helen Mirren’s table. Streep leaned over to talk to Mirren, who was seated and pleased to see her good friend.

4. Speaking of Noah and Greta…
The directing couple behind “Marriage Story” (his) and “Little Women” (hers) were also popular, getting well wishes as they moved around the room. As they navigated through the crowd, Gerwig held Baumbach’s hand and directed him: “This way!”

5. Hug a Celebrity
When Saoirse Ronan saw Margot Robbie before the show, they hugged it out.

Taylor Swift has arrived to her table at the #GoldenGlobes. pic.twitter.com/FWbJvm5J1b

8. Charlize Theron needed a martini
Just as the show was about to begin, Charlize Theron was spotted rushing to her seat from the bar holding a full martini glass. How else is one expected to make it through the three-hour-plus ceremony? Later on, Theron, who was nominated for best actress in a drama for “Bombshell,” introduced Tom Hanks, the recipient of the Cecil B. DeMille Award.

9. Beyonce and Jay-Z arrived late
About an hour into the ceremony, there was a stir in the ballroom as Beyonce descended the steps just as Kate McKinnon was beginning to introduce DeGeneres. But the Globes don’t allow anyone to sit during a televised speech, and not even Beyonce was granted an exception. The couple stood for a minute or two, waiting for McKinnon to finish speaking. They finally took their seat when the lights dimmed and the clip reel played of DeGeneres’ greatest TV moments.

Beyoncé and Jay-Z (standing) have arrived at the #GoldenGlobes at the beginning of the Ellen tribute award. They were able to take their seats after Kate McKinnon’s introduction. pic.twitter.com/2tgi4DVCzl

10. Jennifer Lopez left early
Lopez was considered a favorite in the best supporting actress race for her performance in “Hustlers,” but instead Laura Dern (“Marriage Story”) took that prize. After Lopez was done presenting, she bailed from the Globes before the final few categories, including best motion picture drama, were announced.

11. The award for the biggest standing ovation goes to…
DeGeneres, Tom Hanks, Elton John (who won best original song for “(I’m Gonna) Love Me Again” from “Rocketman”) and Joaquin Phoenix all received the biggest standing ovations as they accepted their Golden Globes. Michelle Williams, who gave a politically charged speech when she won best actress in a limited series for “Fosse/Verdon,” energized the crowd. Ricky Gervais started off strong, with rolls of laughter inside the ballroom during his opening monologue, but his later jokes throughout the ceremony — especially one about women directors — fell flat.

12. Renee Zellweger was nervous
In the middle of the show, Zellweger confessed to Variety that she was nervous. Although she’d won three Golden Globes before, she said that her last appearance at the telecast was 17 years ago for “Cold Mountain.” But she had no reason for any jitters. At the end of the night, she picked up her fourth Golden Globe statuette for best actress in a drama for “Judy.” Ironically, she and “Joker” star Joaquin Phoenix got up and talked to each other in the last commercial before both their wins. It turned out to be good luck for both of them.

13. Must love this dog
Finally, as A-list celebrities made their way inside the Golden Globes, they were greeted by Keira. This Dutch Shepherd was tasked with the important role of being this year’s bomb-sniffing dog.

Meet Keira, a Dutch shepherd, who has the very important role tonight of being the #GoldenGlobes bomb-sniffing dog. pic.twitter.com/3k2nAuv9ws