The Go-Go’s on Sundance Doc: Neither ‘America’s Sweethearts’ Nor ‘Drug-Crazed Demons’ 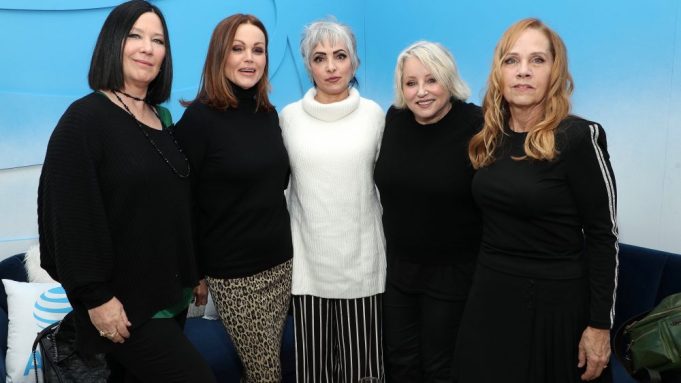 Some people might come to a Go-Go’s documentary wanting a purely fun, bubbly experience, based on the effervescence the group projected at its breakthrough peak in the early ’80s. Others might want a sex, drugs and rock ‘n’ roll tell-all, if they’re aware of the tensions and bad habits that led the all-female band to acrimoniously break up in the mid-’80s (before many off-again, on-again reunions that have followed).

Debauchery, or debutantes — which vision would director Alison Ellwood (“History of the Eagles”) favor for her film, titled “The Go-Go’s”?

As the group and their director stopped by Variety‘s Sundance studio for a video interview Thursday, right before the film’s premiere, it was clear they were happy that pop-punk frolic got its due in the new movie, since the sordid side of things already got a protracted hashing out in a VH1 “Behind the Music” 20 years ago.

“I was really happy that Alison focused a lot on the fun we had, and the camaraderie and the love and the milestones,” said Jane Wiedlin, “and not just the salacious stuff, because we’ve already been through one salacious thing with VH1. But there’s so much more to us than just ‘Oh, America’s sweethearts!’ or ‘Oh, they’re drug-crazed demons.’ You know, we’re humans and we’re in-between that. So I feel like Alison really showed that.”

Said Ellwood, “I also think that what I found so wonderful working with all of you, especially when you’re together, is how fun and funny you are together. And for a while the film was too funny. It’s like, wow, okay, here’s the next antic. And so we had to give it a little bit more shaping of story, because there were a lot of fun moments that are on the cutting room floor.”

The five members were clearly pleased to be in Park City for a high-profile slot that’s awarded to very few of the music documentaries submitted every year. (Theirs is the only one on this year’s lineup besides Taylor Swift’s.) “We had no expectations” of being accepted, said Charlotte Caffey, “but when we got the news, we were just over the moon. I mean, I’ve kind of learned in this band that anything can happen. I mean, when you think it’s kind of winding down… ‘Oh, we have a Broadway musical. Oh, we’re getting a star on Hollywood Blvd.’ It just seems like things always happen, so this is awesome. The band that won’t die, right?”

Said Belinda Carlisle, “It’s like no time has passed whenever we get together. It’s like it was yesterday. It’s funny. I mean, I’ve never had that sort of experience with anybody else.”

“I didn’t know exactly that that would happen,” said Ellwood, “but I’m the eldest of four girls, so I’m very familiar with sisterhood, and so this felt very natural to me. When you’re with them together, they act like sisters. and sometimes that’s fighting a bit. But usually that’s a lot of love that comes along with that.”

Added Carlisle, “When it becomes a business and money is involved…”

“Money can be pretty ugly,” agreed Gina Schock. (The film delves into how many of the differences that led to the initial split had to do with arguments over financial splits and the inequity in publishing payouts.)

The film is being shopped for theatrical rights at Sundance — as explored in an interview with the band and filmmakers published earlier this week in Variety — with an expected summer bow on the big screen before Showtime airs it in the fall.

Starting in on the film “was tough at first,” said Schock, “because we weren’t sure exactly what we wanted to talk about or how in-depth we wanted to get about all the different subjects — different periods of time when we were in control and out of control. Alison is a great storyteller; that’s the thing. When I was watching it, I wanted it to keep going when it was over. I’m not kidding.”

The film makes a case for the group as important in the history of feminism in the arts, though “we didn’t fly a flag,” they say. Now, they don’t mind pulling one out quite so much.

“We were a female operation,” said Carlisle, talking about more than just the lineup. “We had female roadies, female managers. It was a girls’ club. It was no boys allowed. I think we just were feminists because we did what we wanted to do on our terms and we were authentic.”

“I was really worried,” said Kathy Valentine, “because the Eagles one [that Ellwood directed] had so much amazing vintage footage. We didn’t have that (from the early punk-rock days in the late ’70s into 1980, before the group was signed), and I was really worried how Alison was going to make a compelling visual piece, using basically stuff that I thought had just been seen before. It sometimes feels like between YouTube and what the fans have shared with us, that we’ve seen it all.”

“Having said that,” added Wiedlin, “I feel like Gina is sort of the band’s historian. She’s never thrown out anything, including her high school underwear.”

“I save things,” said Schock.

“Are you still wearing that?” the others asked.

“Anyway, Gina had so much footage. She has every videotape, every photograph — she must have 10 warehouses of stuff.”

Said Ellwood, “The Polaroids in particular make it feel so personal. This is them telling their own story as you were living it, and having access to that material  — from all of you, but you (Gina) have obviously the most –— makes it so special, I think.”

“I was surprised about where you found all the live footage,” said Carlisle. “I mean, nobody obviously had video cameras or mobile phones back then.”

Now, they have the opposite problem. The contemporary footage may be a little too high-quality for the members’ tastes — or at least they were imagining it might be when they were to see it on the big screen for the first time at Sundance, after previously only viewing a rough cut on laptops.

“I’ll be playing Words With Friends every time I’m on the screen,” said Valentine.