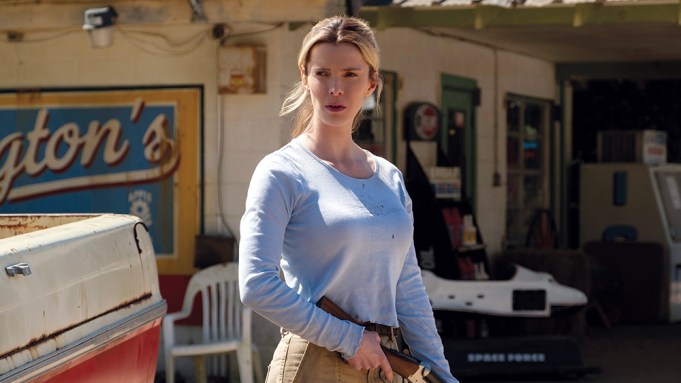 Much is still unknown about the film, which the studio put on hold last summer to curb the chaos. While the filmmakers have long said that misinformation about the movie’s plot forced it onto the shelf, they hope audiences will make a key discovery on opening weekend: Betty Gilpin.

Gilpin is best known for her Emmy-nominated turn on the Netflix original series “Glow,” and emerges in “The Hunt” as a rarely seen figure in mainstream movies — a female killing machine who is not avenging a slain child or seeking revenge against bad men who hurt her. The genre, like many others, is disproportionately crowded by male stars.

“I feel very altered by this experience in a positive way,” says Gilpin, who is sitting with co-writer and co-producer Damon Lindelof during the film’s long-awaited Los Angeles press day. “Playing this part, it opened up chambers in me that I thought were closed forever. I thought I had a realistic sense of what I was going to be allowed to do as an actor. I never thought that I would get this opportunity.”

Yes, female superheroes are taking flight in more movies than ever, including this summer’s “Wonder Woman 1984,” and sci-fi has a female hall of fame. But the disparity in earthbound action has been called out in recent years by the likes of “Fast & Furious” actor Michelle Rodriguez. In 2018, Rodriguez said she would exit the blockbuster franchise without increased representation for women. She returned for this year’s “Fast 9” after Universal hired a female writer to contribute to the project.

Gilpin plays Crystal, one of a dozen people who wake bound and gagged in a forest clearing at the start of “The Hunt.” Judging by their accents, their outfits and the mounting attempts on their lives, it becomes clear that this group of “deplorables” (as one character calls them) are the targets of stealthy and unhinged elites. Early media reports maintained that this dynamic portrays a battle between Democrats and Republicans, inspiring President Trump to call the release “dangerous.” But in fact it’s far more meta. On one side is a group of internet trolls who perpetuate a conspiracy theory about rich lunatics hunting rednecks in the woods. Their opponents are a clique of CEOs who’ve been fired from their cushy jobs. Their loss of privilege causes the elites, led by Hilary Swank, to believe they’ve got nothing to lose.

“We’re living in the world we satirized, about information getting wildly lost in translation. That happened to this movie,” Gilpin says. “Yes, my eyebrows were at the top of my forehead, and I was laughing really hard reading the script. I thought this is exactly the movie that everybody should watch. It was frustrating to hear people speak on behalf of the movie who had never seen it.”

More interesting, she says, is how early response has pegged her character as firmly on the side of the so-called deplorables. While she speaks in a twang unheard in coastal cities and dons an outfit conspicuously colored like the orange of a prison uniform, Crystal is a veteran of the war in Afghanistan who can engage in a lively conversation about the works of George Orwell. She picks apart her enemies with military precision, but more than survival, she wants out of the philosophical game.

“I think it’s so indicative of what the movie talks about, the fact that if you look at someone’s zip code and dress code, you think you know where they stand politically,” says Gilpin. “While Crystal may look and sound like someone at a certain kind of rally, my feeling is that she’s not at any rally. She’s exhausted by both sides and rolls her eyes at this.”

Lindelof says Gilpin’s heroine is his favorite kind: “Someone who says, ‘I don’t want to be in this movie.’”

The producer hesitantly says he would entertain a sequel, but only if it followed Gilpin into new terrain. “The challenge would be, how do we find another scenario for her? It can’t be [‘Die Hard’ protagonist] John McClane finding another group of terrorists.”

Gilpin hopes audiences draw their own conclusions. “No matter what bucket as a viewer you find yourself in, let Crystal be your way into the movie.”

Lindelof clears his throat and apologizes. “I’m so sorry, it’s a basket, not a bucket. There’s something so dainty about that,” he laughs, alluding to Hillary Clinton’s famous phrase about Trump supporters during the 2016 presidential campaign.

“The basket,” he says to Gilpin with a wink, “is where we keep our deplorables, darling.”