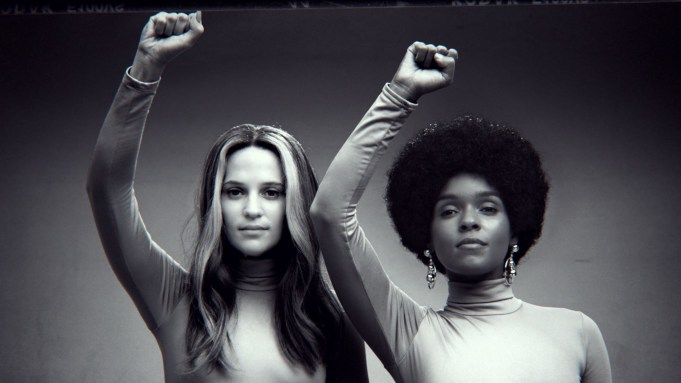 Feminist icon Gloria Steinem is played by not one, not two, but four different actresses in Julie Taymor’s upcoming film “The Glorias.”

In a first-look that debuted on Thursday, the nontraditional biopic features Julianne Moore, Alicia Vikander, Lulu Wilson and Ryan Kiera Armstrong all portraying Steinem at different stages of her life.

Based on Steinem’s autobiography “My Life on the Road,” the film explores the many different hats the feminist wore: world traveler, journalist and fighter for women’s rights. Beginning during Steinem’s time in India as a young woman, “The Glorias” takes viewers through Steinem’s founding of Ms. magazine and her role in the women’s rights movement of the 1960s and ’70s.

“The Glorias” received strong reviews after it premiered at this year’s Sundance Film Festival. Variety’s chief film critic Owen Gleiberman called it “a timely yet rousingly conventional look at the legendary feminist leader.”

“The film is acted with great flair and emotional precision, and it’s been staged by Taymor with vividly detailed historical flavor, yet it tells Steinem’s story in a way that’s more wide than deep,” he wrote.

Unlike other biopics of famous women, the narrative of “The Glorias” is not driven by romance or men, but by Steinem’s relationship with herself and the women she fought alongside for equality.

“The Glorias,” produced by Roadside Attractions and LD Entertainment, premieres on digital and streaming exclusively on Amazon Prime Video Sept. 30.