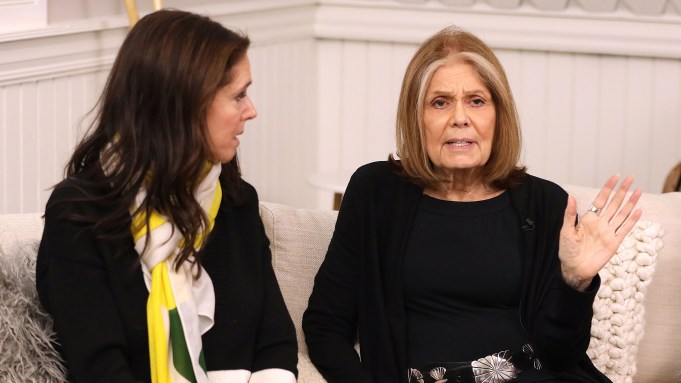 In the midst of a whirlwind press tour for her Sundance biopic “The Glorias,” activist icon Gloria Steinem reflected on the state of women’s reproductive rights in Hollywood and beyond.

Attending the Variety interview studio with director Julie Taymor, the 85-year-old Steinem said Americans have yet to realize that controlling reproduction is the top priority of any oppressive government, and the very definition of the patriarchy. The issue has been discussed widely this year in show business, after production-friendly states like Georgia adopted legislation that seeks to out outlaw abortion after six weeks, and creatives revolted. Last weekend, Donald Trump became the first sitting president in history to attend an anti-abortion rally.

“I hope we understand, or begin to understand, that every totalitarian, authoritarian racist, caste, as in India — every hierarchical structure begins with controlling reproduction,” said Steinem, who has done extensive work around the globe for gender equality.

“It isn’t the side issue, it’s the basic issue. In circular, egalitarian cultures, women can decide the fate of their own bodies. If we did not have wombs, we’d be fine,” she said.

In “The Glorias,” four actresses take up the mantle of playing Steinem, including Alicia Vikander and Julianne Moore. Taymor documents with an eerie timeliness how Steinem fought to make men (and even her fellow female activists) aware of the idea that abortion is never a preference, but women must be in control of their own bodies. It’s a lesson America still hasn’t woken up to, Steinem said.

“The definition of patriarchy is controlling reproduction, made way worse by racism, because then you really have to control reproduction to keep races separate, or caste, in India. This is the first step, whether it’s Brazil or India or Hitler’s Germany,” Steinem said. “The fist thing that Hitler did was to padlock the family planning clinics and declare abortion a crime against the state. I don’t think we have yet understood that it is the first step in every authoritarian structure.”

Trump spoke at a Right to Life rally in Washington, D.C. last Friday, where he told a crowd of thousands that “unborn children have never had a stronger defender in the White House.”

“The Glorias” is currently seeking a worldwide distributor.