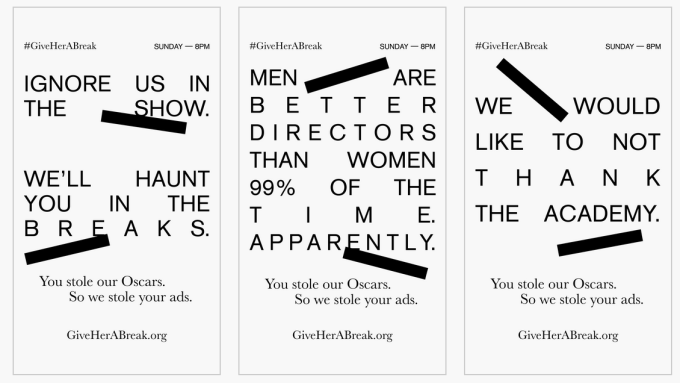 Nonprofit initiative Give Her a Break has come up with a unique way to protest about the lack of female directing nominees at this weekend’s Academy Awards.

Give Her a Break has launched an online portal to the Oscars live stream that will flip during the ad breaks to showcase female-directed films. It will then switch back to the Oscars when the awards show resumes.

#GiveHerABreak has also been gaining traction on social media. Links to the site have been tweeted by “Honey Boy” director Alma Har’el, and not for profit Film Fatales.

#GiveHerABreak is a portal to the Oscars Livestream… But during the ads, we flip to showcase films from the women directors they ignored.

In 92 years @TheAcademy nominated only 5 women as best directors. https://t.co/ozMUwH2ADx

Give Her A Break was founded by ex-Droga5 creative director Mo Said, whose creative agency Mojo Supermarket is behind the campaign.

“Even though we’d usually be making the ads during the Oscars, this issue is much bigger than us,” said Said. “There’s millions of women who create incredible films, but just don’t get the same break by this misogynistic industry. We wanted to fix that.”

Give Her A Break said the technology doesn’t illegally re-broadcast the award show, but acts as a channel switching service for the viewer.

Viewers can log in with their cable or ABC credentials, and watch the Oscars as usual. When the ads come on, the website switches the channel from the broadcast and instead plays YouTube trailers of films made by women in the past year.

In the Academy Awards’ 92-year history, only five women have ever been nominated for best director and only one – Kathryn Bigelow – has ever won.

Widely praised women directors who did not get nominated for the best director award this year include Greta Gerwig’s “Little Women,” Marielle Heller for “A Beautiful Day in the Neighborhood,” Lulu Wang for “The Farewell,” Melina Matsoukas for “Queen & Slim,” and Lorene Scafaria for “Hustlers.”

A report this week by the Women’s Media Center found that only 30% of all non-acting Oscar nominations went to women this year. Of the 186 total nominees in those categories, 56 are women, 130 are men.