Gina Rodriguez on Ease of Working With Evan Rachel Wood: ‘She Loved Me’ 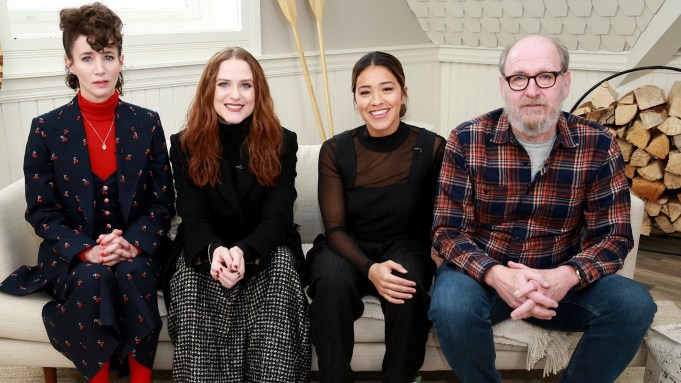 “Kajillionaire,” the third feature by the artist Miranda July, is about a family of grifters who deliberately lives on the margins in Los Angeles. The father, Robert (Richard Jenkins), is full of conspiracy theories and other nonsense; the mother, Theresa (Debra Winger), is mostly silent as she goes along with him; and their adult daughter, Old Dolio (Evan Rachel Wood), is the product of their abuse — half imprisoned snail, half open wound.

They live next to a bubble factory, and execute tiny heists that barely make them any money, but allow them to exist. It’s a nuclear family as cult, times four billion.

Their insular existence is punctured when they meet the vivacious Melanie, played by Gina Rodriguez, who wants in on the family’s scams — at least at first. Melanie has troubles of her own, certainly, but she has standard human emotions and wants, which Old Dolio’s parents have thwarted in her. Through Melanie’s eyes, Old Dolio begins to see her parents for who they are. And under Melanie’s gaze, she begins to feel desire.

At the Variety Studio at the Sundance Film Festival, Wood and Rodriguez discussed how they built the relationship between their characters.

“We work so well together, and Gina is so open and loving and also just a total smart badass,” Wood said. “She’s so good at what she does, and she brings this incredible energy with her that was really easy to fall in love with.”

Wood continued: “Our dynamic was always funny, because we play such opposites, but somehow it really works. So there’s this amazing connection between the two of us.”

Rodriguez said she felt the same way. “Evan is a bomb-ass lead, and is gracious and loving and giving and no ego and no diva and no hindrance. You don’t feel hindered or afraid, you don’t feel like you can’t be your best self because she brings that out of you, and she wants you to be it. And that’s when you find a giving actor like that. You’re like, ‘Oh, I can just be present with this woman, and she’s gonna just let me be all me and she’s not gonna hurt me or judge me. And she’s just gonna love me.'”

Rodriguez then hooted with appreciation of Wood.

A24 is closing in on worldwide distribution rights to the film. And after it’s released, audiences can see the chemistry between Wood and Rodriguez for themselves.