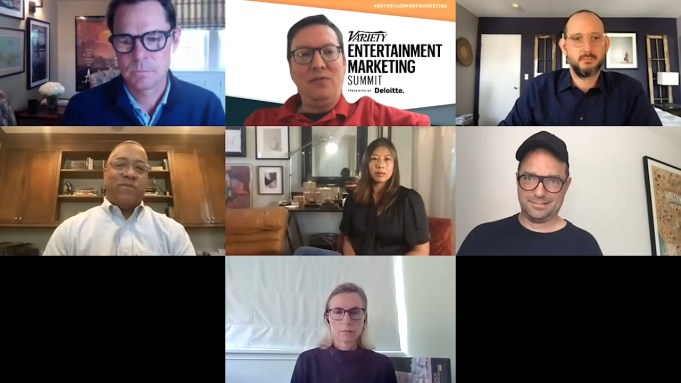 COVID-19 and its long-term affects on film marketing took center stage at the Keynote Marketing Roundtable event on Wednesday, as part of Variety‘s Entertainment Marketing Summit.

Throughout the event, they discussed the need to be flexible during the pandemic, new technological approaches to advertising, and the durability of the exhibition business, which has been hit hard by coronavirus closures.

“In the old days so to speak, we all thought that you had to launch a trailer early out, maybe four, five months out, and then you would build awareness and so forth,” Cassidy said. “Now, we launch trailers a month and a half out and feel that we can still build awareness for that core audience. I feel like that alone is a pretty seismic shift.”

The advertising process and overall rollout has sped up drastically, he said, but it’s something many in the industry didn’t know could be done successfully until the pandemic forced them to devise new strategies. Blockbuster films often had large amounts of money dedicated to continually generating interest over a long period of time, but Noble said the new strategy involves maximizing impact in a shorter window of time.

“Budgets are tighter. You’ve got to be more concise with what you do, more cognizant with what you do. And for three, four weeks, you just want to hammer, hammer, hammer,” Noble said. “So, I think that’s a big difference, where you had the luxury of time … six weeks is probably what you’re looking at for a big campaign now.”

Shorter campaigns aren’t the only major marketing change. Video chat platforms like Zoom are upending the way that films are promoted. The video conferencing app and other streaming sites have made cast and crew more available to do press junkets and engage in activities that could further “eventize” the film in popular culture.

“We’re trying to mix some of the traditional ways of doing things with new ways of doing things, and having more virtual participation,” Kearey said. “There’s something that’s very democratic and sort of egalitarian about being able to work with the talent in different time zones via technology.

There are quite a few perks to the digital interview style, Caines added. From the relative ease of getting talent together to the quick turnaround, many more media sites and members of the press are able to converse with the stars than was originally feasible.

“On one of our recent premium video on demand releases, (Actors) did about 100 interviews because we were able to have them in the comfort of their home, and cycle in press, and an array of press that may not have otherwise been invited to sit and talk to them,” Caines added. “So, that’s one of the elements that when we return to life as we knew it, a theatrical experience, we will still keep some of those remote publicity and campaign opportunities.”

Social apps like TikTok have seen a spike in popularity, which marketing strategists have taken an interest in. President Trump has recently expressed interest in shutting down the Chinese app domestically or shifting it to a U.S. parent company.

Cassidy said an important advertising strategy involves inundating the potential audience with advertisements through all platforms they may be accessing. This includes commercials, Twitter, newspapers, Facebook and now TikTok.

“Innovation is really important especially at this point in time. We’re all vying for share of mind and share of wallet for the audience, so we lean hard into new tech,” Caines said. “The things that are being written and said about TikTok have us maybe on a back flip at the moment to see how that works out.”

Coronavirus has changed the way that films are distributed. Historically, major releases have debuted in domestic markets before hitting international venues. That’s not the case any longer. Because more theaters are open in certain foreign markets, movies like “Tenet” have launched overseas before they are debuting in the U.S. Studios are also becoming more amenable to debuting films on-demand at the same time they open in cinemas.

“What’s been interesting on the streaming side is the ability for films now to pierce the cultural zeitgeist in a global way,” Davin said. “When you have a singular day and date release around the world, it no longer matters if you live near a theater … or if you’re in a country where in a traditional model the movie wouldn’t get to you for a couple of weeks. You can, through the power of technology, have a shared universal experience with people across the globe.”

But theaters will assuredly see a resurgence when consumer confidence increases again, Caines said. But many on the panel stressed that theaters should take extra precautions when shifting toward opening. If safety guidelines can be met, then marketers can begin to eventize theater releases again.

“For me, I think (safety) is the key,” Noble said. “If they can get just that across, we’ll take care of the fun and the entertainment. We can do all that part of it if they can focus on just being a safe place to go and a place to have fun and forget about things.”