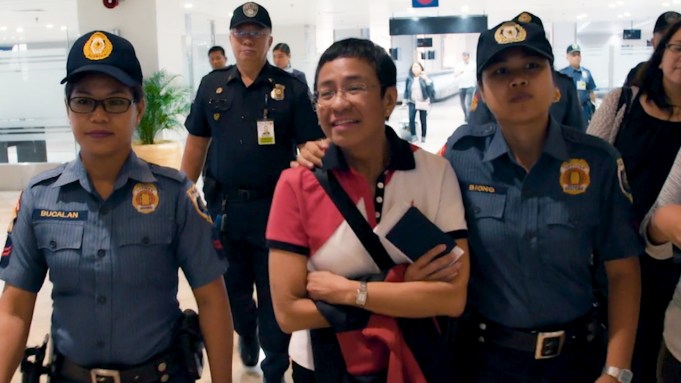 Since 2016, Maria Ressa and her team of journalists at the Philippines-based news site Rappler — which she co-founded and serves as executive editor — have been squarely in the cross-hairs of the country’s president Rodrigo Duterte. It’s part of an ongoing battle between the president and Pinoy journalists, Ressa included, who have covered his violent “drug war,” a campaign that has resulted in thousands of deaths, many suspected as unlawful — and called into question the viability of the fourth estate in the Philippines (in July, one of the country’s largest broadcasters ABS-CBN was shut down, the first time such an action had been taken since 1972, when then-president Ferdinand Marcos installed martial law).

Ressa, Rappler and the increasingly tenuous state of free press and democracy in the Southeast Asian nation are the subjects of the documentary “A Thousand Cuts,” directed by Ramona S. Diaz, with Ressa’s plight taking center stage. Currently, she faces two cyber libel cases, one for which she was convicted in June and carries a sentence of up to six years in jail. In July, she pleaded “not guilty” to charges of tax evasion.

“At the very beginning, when all the cases were filed, I realized that the end goal is to silence me and Rappler,” Ressa, 56, tells Variety. “It is a press freedom issue, right? These are lots of legal acrobatics to weaponize the law so that we crumble. And I refuse to crumble.”

The film, which premiered at Sundance and will open in virtual cinemas on Aug. 7, shows the lengths to which Rappler journalists go covering their respective beats as well as harrowing moments from Ressa’s own encounters with law enforcement, such as her 2019 arrest upon arriving at the Manila airport after a flight from San Francisco. In another scene, she casually straps on a bulletproof vest and slumps into the backseat of an SUV. The threats to her work — and life — are, seemingly, ever-present.

“In four years time, I’ve learned that the way to handle this is to keep doing our jobs and that’s part of the reason, every time I feel like I’m not doing my job, I work harder,” she says. “The more the government harasses me and Rappler and other journalists, the more I think, ‘We must be missing a story… What are we missing that they don’t want us to find?’”

“A Thousand Cuts” also touches on the social media-fueled disinformation and misinformation campaigns President Duterte has deployed, which has resulted in death threats and online abuse directed personally at Ressa; at one point, she was receiving some 90 hate messages an hour. The veteran journalist thinks tech companies play a crucial role in preserving or eroding democracy by how they mitigate (or not mitigate) the spread of misinformation.

“In the Philippines, 100 percent of Filipinos on the internet are on Facebook. So Facebook is our internet, but their algorithms are selective,” she observes. “They don’t actually just give you the facts. They’re not passive [in what] they choose and what they choose, inevitably, are lies laced with anger and hate. This is emotional manipulation.”

According to Ressa, since 2018, the Philippine government has filed 11 cases against her and Rappler in 14 months, resulting in eight arrest warrants for her. The former CNN Manila bureau chief has been formally arrested twice, and the cumulative maximum sentences behind the cases could have her facing up to 100 years in prison.

It’s a reality she has grappled and made her peace with. In her commencement speech to Princeton University’s class of 2020, she told young graduates to do what she has done to cope: embrace her fear.

“Whatever that thing you’re most afraid of, you touch it. You hold it. And then you embrace it so that you rob it of its sting,” she says. “For me it’s worked throughout my life because we are our worst enemies, and the tactics of intimidation require using your own fears against you. So, I refuse to let that happen.”

Watch the full interview with Maria Ressa above. After its theatrical run, “A Thousand Cuts” will air on PBS’s “Frontline” in Jan. 2021.