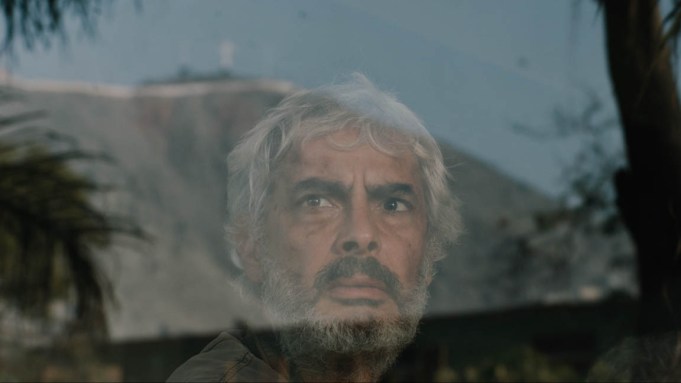 Set in Lima, its local market and dramatic hinterland of sacred Inca sites, wave-pounded beaches, huge cliffs and dusty mountains, “Contactado” turns on Aldo (Baldomero Cáceres), once when young a self-proclaimed prophet, known as Aldemar, who claimed to have made contact with aliens with bases on the ocean floor.

Several decades later, aging and writhing in self-disgust, he lives in attempted anonymity, visits his mother who still writes him off as a fraud. Then Gabriel (Miguel Dávalos), who proclaims himself a follower, appears on the scene. The young man encourages Aldo to return to preaching, though Gabriel’s utter dedication to knowing everything about Aldo’s pasts speeches, references and oratorial techniques raises mounting questions about his real agenda.

Produced by Perú’s Sudaca Films, and co-produced by Brazil’s Klaxon Cultura Audiovisual, Norway’s DHF, Peru’s Makaco VFX-Diego Velázquez and Artefacto Films and the Venezuelan office of Sudaca Films, “Contactado” marks the third feature from Peru’s Ugas, whose second, “The Kid Who Lies,” won best screenplay at the Havana Film Festival. Ugas’ debut, “At Midnight and a Half”  premiered at the Tokyo International Film Festival.

“Contactado” is penned by Ugas and Mariana Rondón, the same writing team behind “Pelo Malo,” which, directed by Rondón, went on to win San Sebastián Festival’s Concha de Oro, a Bronze Alexander and the Fipresci Prize at the Thessaloniki Festival and a Silver Astor for direction and screenwriting at Argentina’s Mar del Plata Festival.

Films of Aldomar preaching on a beach many years before are now collectors’ items, and his slogan “We are Them” still has an effect decades later for poor Limeños seeking escape from their lives, as does his promise of change, transformation and even land ownership, though he wraps his messages up in Inca age cycle mumbo-jumbo.

Aldomar’s followers were “people in need of hope. We all are in need of something, especially in days like these. That’s why there is a big risk of schemers arising among us,” Ugas told Variety, calling the film “a reflection on the encroachment of a belief system. I’m effectively seeking to draw a parallel with the discourse of political leaders in Peru.”

Ugas’ filmed touching testimonials from ordinary Peruvians explaining in all their sincerity their UFO theories – of solar fluids, idea planets, and that the stars are really spaceships –  which are included in the film as research performed by Gabriel.

Elsewhere, as the teaser trailer suggests in its number of close ups of Aldo, Ugas works with a handheld, edgy camera, “very close to the face of the character, feeling his breathing, his hesitation, his urge to come back…..” She continues: “We see him in a place of need, just like his former followers, or in a place where he is once again overcome by ego.”

Inspirations for the film included Albert Camus’ “The Stranger” and Dostoevsky, fictions “exploring the universe of a fearful individual.”

In a way, Aldo also needs to have faith – in himself, his attractiveness, and utility – even if the hope he gives other people is based, as he knows only too well, on total fraud.