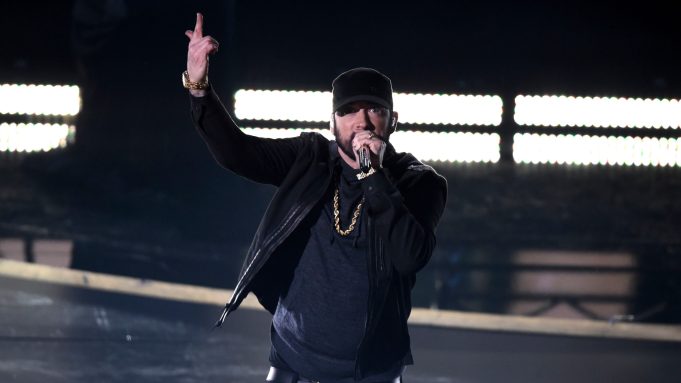 Eminem made a surprise appearance on the Academy Awards show Sunday night, delivering a rousing rendition of “Lose Yourself,” his hit from the 2002 film “8 Mile” in which he starred — some 17 years after it won an Oscar. His appearance immediately followed a montage celebrating the sound editing/mixing award, which wound down with footage from “8 Mile” and concluded with Burt Reynolds in “Deliverance,” saying the famous line, “Sometimes you have to lose yourself before you can find anything.”

Eminem’s appearance was a tightly kept secret: Sources say the Dolby Theater was put on lockdown during rehearsals (which must have been extensive, as he was accompanied by a large band and a string section), and that if the news of his appearance leaked to the media, he had the option to cancel.

The reaction of the crowd was impressively ecstatic — the song is nearly 20 years old, after all, and several of the evening’s stars who sang along probably remember it from their teens — with everyone from Brad Pitt and Leonardo DiCaprio to Billie Eilish and Anthony Ramos standing and applauding at the end. (Martin Scorsese, however, appeared unimpressed.)

Interestingly, the performance was something of a do-over: While some accounts say Eminem refused to perform a censored version of the song at the 2003 Oscars, as requested by show producers, other sources say it didn’t feel right for him at the time, and he didn’t think he would win. He did not even attend the 2003 show: Rather surreally, the award was presented to Eminem and co-writers Jeff Bass and Luis Resto by Barbra Streisand, although only Resto was present at the ceremony and accepted the award. Either way, the issue was sidestepped on Sunday night’s show, 17 years later, by bleeping him three times.

Eminem addressed the issue on Twitter moments after his performance.

Eminem (aka Marshall Mathers) has made a habit out of surprises in recent years: His last two albums, last month’s “Music to Be Murdered By” and 2018’s “Kamikaze,” were both surprise releases, and in 2017 he lambasted President Donald Trump in a prerecorded freestyle called “The Storm” that aired during the BET Awards.

In perhaps the biggest (albeit unintended) surprise, a different Eminem anti-Trump song — “Framed,” from his 2017 album “Revival” — was confrontational enough to get him interviewed by the Secret Service in January 2018. In the most entertaining segment of the official report, which was obtained under the Freedom of Information Act, when agents began reading lyrics to the rapper, “Mathers was familiar the song and began rap along with the interviewers as the verse was read.”