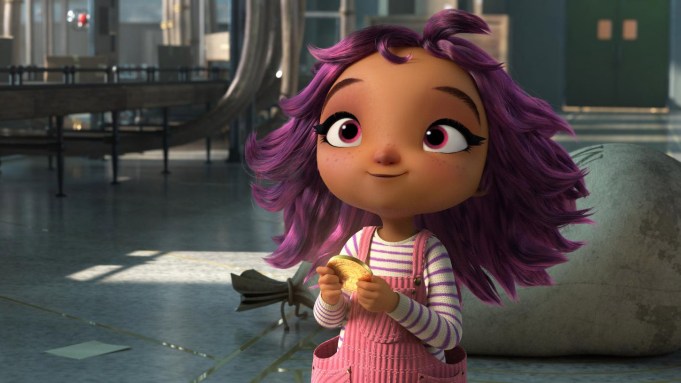 DreamWorks Animation has dropped a first trailer to “To: Gerard,” from writer-director Taylor Meacham, a short feature parable about the sense of magic that a parent or parental figure can spark in an dazzled child, still enchanting them 60 years on – and prompting them to inspire others.

Having been selected for this year’s Tribeca Festival, “To: Gerard” will celebrate its European premiere at France’s Annecy Festival, which runs June 15-30.

In the short film, Gerard, now set in his years, remembers back to when, as a tongue-tied child, he met The Great Volonti, who dazzled him on stage with his sleight of hand as he juggled a gold coin between one hand and the other.

“Maybe there will be a time when you can create a little magic of you own,” The Great Volonti says. before presenting the little Gerard with the coin.

That just hasn’t happened. Gerard has worked all his life in a humble postal office, sending envelopes flying into pigeon holes with the same effortless dexterity he brings to repeating Volinto sleight of hand with his cherished coin. But he has never had a chance to dazzle others – until a little girl wanders into his post room.

A homage to Meacham’s father, “To: Gerard” mixes the greatness of Hollywood – its ability to move audiences conveying life’s central verities – how, even 60, 70 years on, we remain shaped, maybe defined, by our parents, or parental figures – with an aesthetic that drinks deep at the well of French 2D animation or Hayao Mayasaki in its retro detail – Gerard’s pea-green cap, the steam-punk office tubing, a mahogany tape record, pencils – and pastel tones, aqueous blue backgrounds, and delicate play of light. That turns a film which talks about inspiration into its own example.

Variety talked to Meacham – in a heartfelt conversation about parental inspiration – and to DreamWorks Animation’s Jeff Hermann, who developed its shorts program which takes in “Bird Karma,” “Bilby,” “Marooned,· a standout at last year’s Annecy, and now “To: Gerard.”

What is the attraction of these shorts for you beyond making a small gem? What happens to them once they’re finished?

Hermann: There are a few things. With some we try to push the boundaries of artistic styles we would explore, some to explore different technology applications or platforms we are implementing at the studio to provide a testing ground for our crew. But more importantly, and especially in the case with Taylor, it’s to recognize untapped talent and to see where there was potential in people we might not have seen otherwise and craft and mold our next generation of filmmakers.

How do you find that hidden talent in your teams?

Hermann: Taylor was a production coordinator at the time who got to pitch his own idea and then actually direct his own short, which is pretty remarkable for someone that young and from that part of the studio, from production support, and was huge and inspiring to all of us. It allowed us to see the untapped talent around us that otherwise would not have been recognized at that time.

There are strong European and specifically French influences in the look of this film. How did the film’s traditionally inspired 3D aesthetic come about?

Hermann: There are many people at the studio who hail from a traditional 2D background and are inspired by European styles of animation. DreamWorks has had a strong contingent of French artists working at the studio. One is our character designer Nicolas Marlet, who did the character designs for the short. I think one of DreamWorks Animation’s stronger suits is that the look of our projects very much embraces both ends of the spectrum: Not just 3D tech, but the roots of what animation is, which is beautiful artistic expression.

Meacham: And it is a bit of a fairy tale. I think a lot of the style inspiration and the animation style came from the artists onboard. Nico is a fantastic designer and a good friend who is also deeply passionate about magic, in fact he’s a member of L.A.’s Magic Castle. Our head character animator Pierre Perifel is French, and those two brought a lot of their sensibilities to the style. Nico is a fantastic designer who is also deeply passionate about magic.  Early on our production designer, Raymond [Zibach] wanted to take the design language Nico used with creating Gerard and Jules and incorporate them into the aesthetic of the environment. I think it really enhances the story’s fairy tale feeling. That melding of style, along with what our head character animator, Pierre Perifel brought, I think, really contributes to the European and French influence you are seeing.

Although Gerard and the girl are not related, that sense of inspiration and excitement in childhood is obviously something which many audiences would feel about their own parents. It’s a legacy that lasts for life in children when they become adults.

Hermann: That’s great you recognized that. That’s a quality Taylor wanted to imbue in both characters, particularly in Gerard that is his worldview, even though he didn’t get to fulfill his life’s dream, he carried on the spark and inspiration of those qualities and found a moment to share them with a kindred spirit in the young girl, not knowing how he was going to impact her life: He was just excited to share his passion for magic in everyday life. For her to then fulfill that dream on her own and in turn bring him back to celebrate him for having inspired her -that’s the reward in storytelling we find so satisfying and hope it touches people the way it touched us.

Meacham: I think it’s great for anyone to read into the parental dynamic since that’s where it started for me. The film is, in a very real sense, about passing that baton and does touch on a message that is universal, regardless of family. Like Gerard, I’ve observed that in this industry the people I enjoy learning from the most, no matter how long they’ve been in it, still have that spark of excitement and joy for life.  just being alive to be honest. Just to be a part of whatever they’re doing. My dad is very much like that. And beyond the inspiration from my father, this was a unique opportunity to put as many of my influences as I possibly could into the project. I think that helped the story be not so directly about a father and the relationship to their child, and keep that universal sense.

Where do you go from here Taylor? Is there a feature in your future?

Meacham: I’ve definitely invested a lot of time and attention on ideas and preparing. Luck favors the prepared in many ways. DreamWorks Animation has been incredibly supportive through the whole thing, and I’m not shy with them about what I’d like to do!