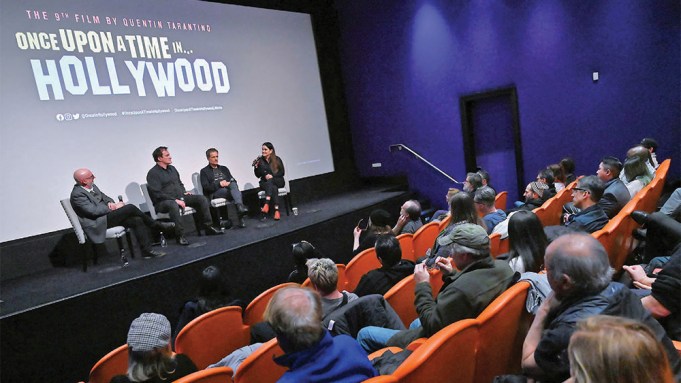 On a Sunday night last November, as part of the traditional awards-season ritual, around 100 people drove up Mount Olympus Drive to a gathering at the home of sound engineer John Ross and his wife Nancy for a screening of “Joker.”

The evening included pre-screening cocktails in addition to a 10-minute Q&A with director Todd Phillips moderated by Scott Cooper.

As guests left the screening room, Phillips shook almost everyone’s hand. If they knew him well enough, there was an embrace or a kiss on the cheek. Guests moved on to fill dinner plates at a sushi bar. A meat, cheese and bread spread was set out on a terrace overlooking the city.

This was just one of many stops on the campaign trail after the film premiered to rave notices in August at the Venice Film Festival (taking the fest’s top prize). All those subsequent months of schmoozing, eating and drinking helped “Joker” earn 11 Oscar nominations, with wins going to Joaquin Phoenix for lead actor and Hildur Guðnadóttir for original score.

The run-up to Oscars 2021 will undoubtedly look very different.

Campaigning amid the coronavirus pandemic has studio executives and awards consultants scrambling in war rooms to strategize new ways to get out the vote.

What everyone can agree on is that in-person events like the “Joker” gathering will be less frequent and far more controlled for social distancing. “If a screening room can seat 100 people, maybe it goes down to 30,” another consultant says. “Invites may now include directives to wear face masks and gloves and assurances that the location has been properly sanitized.”

Smaller events will also mean lower costs. Money saved can go toward more media advertising and billboard marketing or simply be reabsorbed by the studios to offset the loss of box office dollars due to theaters being shut down for months.

One studio executive insists that talks with talent haven’t yet begun to explore how much live campaigning they’re willing to do, but most expect that actors and filmmakers will limit their time at events to avoid close contact with guests.

In turn, virtual campaigning will likely replace many such in-person gatherings.

“I suspect we’re going to have big Zoom meetings with only the panelists’ and moderators’ faces, which I think may be better in the long run because when you think about it, a lot of people don’t stay for those Q&As after the screenings,” the awards consultant says. “They’ve just sat through a two- or two-hour-plus movie. They’re tired. They’re hungry. Now you can see the movie and then log on whenever you want to watch the Q&A.”

The question of how — or even if — Q&As will live online is up to the studios. For example, SAG-AFTRA does not currently post its awards season question-and-answer sessions on its website, but studios are often given permission to film them for future marketing and promotion purposes. However, that could be changing. A rep for SAG-AFTRA tells Variety, “Moving forward we are discussing ways to make various types of content, including Q&As, available to members digitally.”

Another idea being mulled is limiting the number of attendees at virtual panels in order to allow questions from the audience.

Reaching older voters will be critical, as many will be wary of attending in-person events and not tech savvy enough to participate in virtual ones.

Consultants and studio execs applauded the Academy after it announced on April 28 that it will allow consideration of films that are released digitally, rather than requiring that they have a seven-day theatrical run, as long as the studios had intended to release them in theaters. “It makes total sense,” an exec tells Variety. “It’s only fair that while theaters are closed, and assuming their plans for a theatrical run were underway, that they have the chance to qualify.”