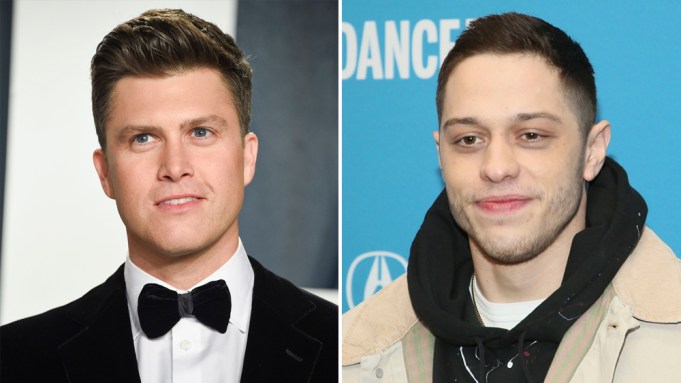 After years of working together on “Saturday Night Live,” Colin Jost and Pete Davidson are taking their comedy antics to the big screen.

Sources tell Variety, the two “SNL” stars are set to headline the wedding comedy “Worst Man” for Universal Pictures. The idea is based on an original idea pitched by Jost, Matthew Bass and Theodore Bressman.

The wedding comedy follows a soon-to-be-married couple and the family dramatics that ensue just weeks before the wedding. Universal’s senior executive vice president of production Erik Baiers will oversee the project on behalf of the studio, and “Saturday Night Live” producer Lorne Michaels will produce the film.

The project is still in development as sources say the studio will now try to find a director for the film, which marks one of the first big projects for the two “SNL” talents as they ponder their future on the show. Davidson and Jost have a longstanding relationship on “Saturday Night Live” and their chemistry has been in full effect when Davidson commonly comes on Weekend Update to riff with Jost and Michael Che.

Jost has slowly started to gear up his film slate as he has been busy the past few years as a co-head writer on “Saturday Night Live” with Che. His memoir “A Very Punchable Face” will be published on July 14 and has already received rave reviews. He is set to appear in Warner Bros.’ “Tom & Jerry,” a live-action and animated hybrid film based on the classic cartoon.

Even as he continues to appear on “Saturday Night Live,” Davidson’s film career has blossomed over the past year, including his star-making role in the Judd Apatow comedy “The King of Staten Island,” which premiered exclusively last Friday on video on demand. He also starred in the Hulu coming-of-age comedy “Big Time Adolescence” that came out earlier this year and can be seen next in James Gunn’s “The Suicide Squad.”

Bressman co-wrote “Jungleland,” the gritty drama that premiered at TIFF and sold to Lionsgate last year. Bass was a staff writer on the Hulu show “Future Man.”

Jost is represented as an actor by CAA. His attorney is Morris Yorn Barnes Levine. He is also repped by Relevant.

Bass is represented by Circle of Confusion and Felker, Toczek, Suddleson, Abramson LLP.