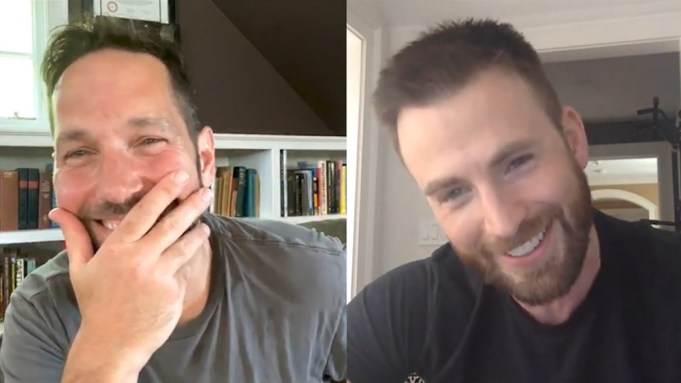 Chris Evans has a video on his phone of the first day he met Paul Rudd. It was on the set of the 2016 movie, “Captain America: Civil War.” Evans was reprising his role as Captain America in the Marvel blockbuster; for Rudd, it was his introduction to audience as Ant-Man (also known as Scott Lang).

That day, as Rudd was trying to acclimate to a Marvel movie set, Evans had an unusual request. Evans wanted Rudd to shimmy to a song from “Grease,” as part of a “yearbook video” that the “Avengers” actors were making for the cast.

Evans recalled what happened next to Rudd in a video chat for Variety‘s Actors on Actors issue.

“There was a real kind of nervousness about Scott Lang, and I just really kind of played into that because that was part of what I was feeling anyway,” Rudd started out telling Evans. “I’d look around and think, ‘Whoa, there’s Chris Evans and there’s Sebastian Stan, and wow — and there’s the suits.’ Do you remember there was like a little makeshift locker room? We’re all kind of changing into things, and I saw the suits on the racks. It felt like being in a locker room of a Super Bowl-winning football team.”

Evans responded, “I don’t know if you remember this. On that day, it was literally the day I met you, [Anthony] Mackie and I and Scarlett [Johansson] got in our head that we were going to shoot — this is so hilarious — a little video just for the Marvel gang, like a little culmination, like a yearbook video, set to that song from ‘Grease.’ ‘We go together, like rama lama,’ whatever that song is. We were just going to go around, take little clips of videos of people dancing and cut it all together. The first day I was like, ‘All right, I’ll start collecting some of this footage.’ I have the footage.

“I was like, ‘Hi, nice to meet you. You don’t know me, but can I get this?’ It was you, Mackie, I think [Jeremy] Renner, Sebastian, and I just said, ‘Look, everyone, just dance for 30 seconds,’ and you did it. You were a great sport. You willingly danced with little explanation from me, and then I never completed the video. I just abandoned it. But I got that footage of our first day of meeting of you dancing.”

As Evans scrolled through his phone, he came across the video. “I’m sorry, I found it,” he said. “It’s unbelievable. I can’t show it — it’s way too embarrassing.”

For more from Variety‘s conversation with Evans and Rudd, read our full story here.