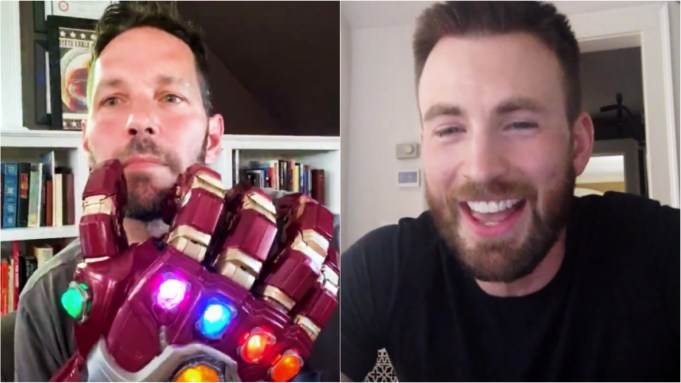 Chris Evans doesn’t mind getting recognized for playing Captain America. In an interview for Variety’s Actors on Actors issue, Paul Rudd — who plays Ant-Man in the “Avengers” franchise — asked Evans about people recognizing him for playing the Marvel superhero.

“What is it like for you when you go outside if there’s just a bunch of kids around?” Rudd said. “Do they just freak out?”

“A little bit,” Evans said. “But that’s so nice, because I grew up with ‘Star Wars,’ and I had certain characters that just meant the world to me.

“We live in a much different time now,” Evans continued. “Back when I was young, celebrity was far away. And actors were only accessible through their work. Now, you have this other channel where you can actually offer a little bit more of who you are, which is a tricky tightrope to walk. But it is nice to be able to share a little bit extra, especially playing a character that I respect so much, and trying to create this nexus between the work you do and the impact you might want to have on kids.”

The two actors also talked about how the “Avengers” cast would play Boggle while shooting the movies.

“This is without fail: You could be playing with a group of 20 people,” Evans said. “The person who is going to win is Paul Rudd. The person who’s going to come in nail-biting second is Don Cheadle, and [Mark] Ruffalo will be way at the end. Although one day Ruffalo found ‘asbestos’ on the Boggle board. It’s a real anomaly.”

For more from Variety‘s conversation with Evans and Rudd, read our full story here.