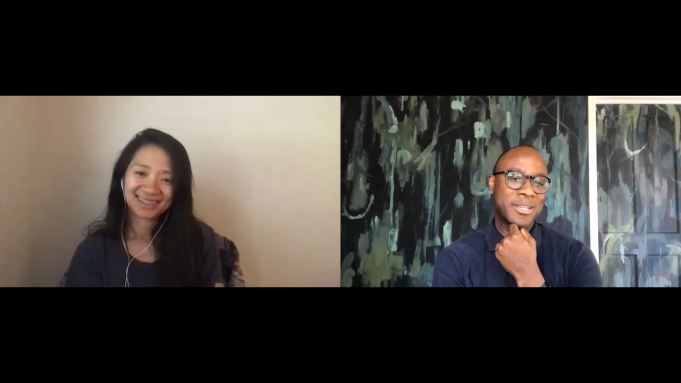 Filmmakers Chloe Zhao and Barry Jenkins met as many indie directors do — hiding in the corner of a film festival party as their heroes and other luminaries schmoozed. It was in 2017 in Telluride, when Jenkins returned to the festival for which he used to work with a Best Picture Oscar for “Moonlight.” There he saw Zhao’s sensational “The Rider.”

Years later, both directors are solidified in a new wave of indie crossovers. Zhao’s “Nomadland,” a sweeping look at a generation of van dwellers starring Frances McDormand, is one of this year’s Oscar frontrunners. Jenkins is preparing “The Underground Railroad” limited series at Amazon. The pair met virtually as part of Variety‘s Virtual FYC Fest to discuss world-building, authenticity, and their massive Disney projects “The Eternals” and the “Lion King” movie.

Barry Jenkins: How did “Nomadland” come to be?

Chloe Zhao: Because “The Rider” was my first film, I spent a lot of time traveling in the heartland and did a lot of car camping. Before Frances and Peter Spears even came to me, I was working on a road movie, but it was about young people. When I read the book by Jessica Bruder, I didn’t realize the road had an entirely different meaning for baby boomers. And so, maybe because I’m reaching 40, I realized, “Oh, that young person’s road, at this stage in my life, isn’t as interesting as exploring what it means when you’re in the twilight of your life and hitting the road?”

Jenkins: You’re often an outsider in these stories that you’re telling but they don’t feel voyeuristic. They feel like they’re told from the inside. What was the process, then, of conforming your original intention with the film and then finding this beautiful book?

Zhao: I think collaboration is everything if you’re coming as an outsider. I would never be able to understand what a 75-year-old woman who has lived on the road for 10 years would feel like. So, that collaboration in both the writing process and deciding what aspect of their lives to put into this film. Even for Frances, who doesn’t live on the road, she is of that generation. She always said, “When I hit 64 or 65, I’m going to change my name to Fern” — that’s where the character’s name came from — “smoke Lucky Strikes, and drink Wild Turkey, and hit the road in an RV.” That’s what she told her husband.

Your films touch on some really heavy and difficult subjects, but you always present them with so much beauty and grace. Why is that important?

Jenkins: It’s important to me, especially with [my new] project, “The Underground Railroad,” but also with “Moonlight,” the fact that myself and Tarell [Alvin McCraney], the playwright, came from the same world … there was something about growing up in that way that made us the people that we are. If I can’t look back at it and see grace and beauty in it, what am I saying? With “The Underground Railroad,” one of my theses was Black people have had such a hard time in this country since its inception, and yet, the fact that I am here and I get to do what I do proves that there had to have been beauty, grace, love, community.

Zhao: There’s a world-building in all your films that I feel is extremely experiential and immersive. And in that world, I can smell it. When I’m in “Moonlight,” I know what that summer smells like. And these aren’t things that are just random, just happen.

Jenkins: It comes down to collaborators, like you said. My DP [James Laxton] is like my guy. And our production designer, as well, this guy Mark Friedberg. He really understands what we’re going for. And just like working with you, he knows, “We didn’t plan to shoot that over there but I’ve got to be prepared that Barry may be going to shoot that thing over there.”

Zhao: People always say, “How do you do the authenticity thing?” To me, actually the land and the place and the room comes even before the character. That van in “Nomadland,” it was named Vanguard. We wanted to give it a story. Sometimes you pass a dealership and you see these old cars. I actually get very emotional. They’re just waiting to be picked up. Each car, it’s like horses back in the day. They have an owner and then it’s a partnership.

Barry, when I was growing up in China, I remember going to middle school and every day just singing everything from “The Lion King” on repeat in Chinese. It’s just such a huge part of a lot of people’s childhood. It’s so exciting for someone like you to come in. Please talk about that.

Jenkins: Yeah, it’s pretty cool. My agents send me a lot of scripts. When this one came, super top secret, I was very skeptical. Like you, I remember when “The Lion King” came out. I had two nephews, and so I used to watch it with them. “Lion King” was the “Baby Shark” of my time. I’d seen it literally hundreds of times and I had this connection to it, and yet I was skeptical because, who am I to make a “Lion King” movie? Not a “Lion King” sequel! A “Lion King” movie.

I read the script and about 40 pages in I turned to Lulu [Wang] and I said, “Holy shit, this is good.” And as I kept reading, I got further away from the side of my brain that said, “Oh, a filmmaker like you doesn’t make a film like this,” and allowed myself to get to the place where these characters, this story, is amazing. What really pushed me across the line was James, my DP, said, “You know what? There’s something really interesting in this mode of filmmaking that we haven’t done and that not many people have done.” That was when I went back to the powers that be and said, “I would love to do this, but I’ve got to be able to do what I do.”

And they said yes! I think part of that is because I knew at that point that you had already shot a very big movie of your own with some of these same folks. And knowing that Chloe Zhao had gone from one of the most beautiful films of the century with “The Rider” to making a Marvel movie, I was like, “Oh, shit. If she can do it, I can do it.”

So, why and how did you do it?

Zhao: I grew up with manga. I have to just say, we didn’t have movies when I was growing up, not the same way that you guys had access to films, but I did have just cabinets and cabinets of Japanese manga. I just devoured them. That was my first love. I wanted to be a manga artist, but I was not very good at drawing. I have been a fan of the MCU for the last decade. So, I put the word out there I wanted to make a Marvel movie and the right project came to me.

I just wanted to work with that team. Again, back to world-building. It is my favorite thing. That’s why I love “Star Wars.” There is a world that is so rich. I wanted to enter it and see what I can do. It’s the same as what you’re saying. Can I put a spin on it while still being true to the essence of it? That’s exciting to me. It’s not that different than me going to the world of rodeo cowboys and saying, “My spin on that is going to be this,” and it’s a collaboration. The chemistry of that, when it’s right, it could be very exciting.

I always see you speak to great filmmakers all the time. Any advice that you feel like looking back now that really changed you?

Jenkins: Lynne Ramsay [gave me] this idea of being the same person you are at home with your family as you are with your second family, which is the people you’re creating this work with, goes a long way. What about you?

Zhao: Someone I really respect and have been working with recently said to me, “You have to know that you have power. Know that you don’t have to fight so hard that you’re just on survival mode all the time. People around you are there to help you and they will be there when you fail. It’s okay to ask for help.”