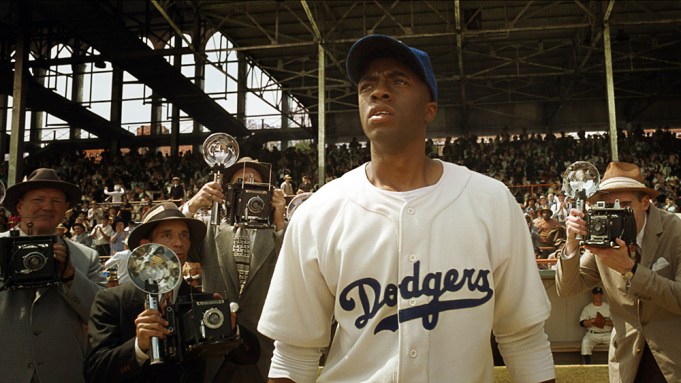 The Remembering Chadwick Boseman Film Retrospective will be available for free on October 3 and 4. Boseman’s films “42,” “Get On Up” and “Marshall” will all air as part of the retrospective.

“We truly appreciate WarnerBros, Universal Pictures, and Open Road Films for providing these three films in support of the Chadwick Boseman retrospective. We’re grateful to be able to offer the ABFF community and other fans a platform to see and celebrate his incredible talent and groundbreaking work portraying important Black figures,” said ABFF Ventures president Nicole Friday.

In “Marshall,” Boseman played civil rights attorney Thurgood Marshall who went on to become the first African American associate justice named to the highest court in the land.

In the baseball film “42,” Boseman starred as Jackie Robinson, the Brooklyn Dodgers infielder who broke barriers and became the first African American to play in Major League Baseball in 1947.

“Get on Up” saw Boseman transform into James Brown from aged 16 to 60, injecting life into the classic moves made famous by Brown. In a touching tribute to Boseman, the film’s director Tate Taylor wrote, “He stayed in character not because that was his method, but because he became James Brown. He would strut up to my first AD (a beautiful blonde from Mississippi) pull her into his arms and as Mr. Brown says, “Hey pretty white lady, Mr. Brown needs a sandwich” then give her a gentle kiss on the cheek. At one point my AD looked at him and begged Mr. Brown to never leave her.”