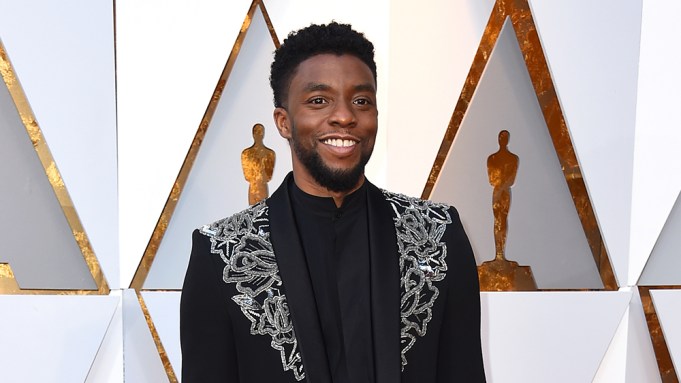 The world knew star Chadwick Boseman as T’Challa, the fearless king of Wakanda who would do anything to protect his people.

But the actor — who tragically died after a four-year battle with colon cancer on Friday — was not only a hero on-screen, but off, as well.

Though Boseman played other major roles, such as Jackie Robinson in “42” and James Brown in “Get on Up,” he left a legacy with “Black Panther,” giving countless children a superhero to look up to. Not only was he the lead of the first predominantly Black cast in a Marvel film, Boseman played the character with vulnerability and undeniable realness.

“His performance as T’Challa isn’t like other actors’ comic-book-film performances. It’s deft and sly and vulnerable, with that singsong accent that lends a note of pensive play to everything he says. And because he infused the character with such a miraculously relatable spirit, Boseman touched a generation. He created a new kind of hero, and in doing so he showed us what was possible — and changed what was possible. He blazed a liberating trail of hope and connection. The sudden loss of Boseman feels as haunting, in its way, as the loss of Heath Ledger, Philip Seymour Hoffman or James Dean: artists who are irreplaceable, and who will live on,” Variety’s chief film critic Owen Gleiberman wrote in a tribute.

Boseman’s legacy will also live on because of his selfless deeds to others, like speaking with cancer patients, surprising his fans and delivering inspirational speeches. Below are five times Boseman was a real-life superhero.

He Gave Inspiration to Cancer Patients

In an interview with Sway’s Universe before the premiere of “Black Panther,” Boseman opened up about two kids with terminal cancer that he had been talking to during the filming process.

“There are two little kids, Ian and Taylor, who recently passed from cancer. And throughout our filming, I was communicating with them, knowing that they were both terminal,” Boseman said. “And they said to me and their parents, ‘They’re trying to hold on until this movie comes.'”

Boseman teared up while telling the story, and knowing that he was also dealing with cancer himself during the time makes the interview all the more emotional to watch.

After the release of “Black Panther,” Boseman appeared on “The Tonight Show Starring Jimmy Fallon” to participate in a heartwarming segment in which he surprised fans of the film.

Unknowingly, the fans told Boseman of the impact “Black Panther” had on their lives, only to meet him face-to-face seconds later.

“It means a lot to see a movie that’s not a Black movie, but just a great, American superhero movie with people that look like me,” one fan said.

He Made a Touching Tribute to Denzel Washington

When Denzel Washington received the AFI Lifetime Achievement Award in 2019, Boseman made an extremely touching speech to his friend and one-time benefactor.

“Many of you already know the story that Mr. Washington, when asked by Phylicia Rashad to join her in assisting nine theatre students from Howard University who had been accepted to a summer acting program at the British Academy of Dramatic Acting in Oxford, he gracefully and privately agreed to contribute,” Boseman said. “As fate would have it, I was one of the students that he paid for. Imagine receiving a letter that your tuition that summer was paid for and that your benefactor was none other than the dopest actor on the planet.”

As Washington teared up, Boseman told of the impact Washington has had on not only his own career, but those of many other Black actors.

“There is no ‘Black Panther’ without Denzel Washington. And not just because of me, but my whole cast, that generation, stands on your shoulders,” Boseman said. “The daily battles won, the thousand territories gained, the many sacrifices you made on film sets during your career, the things you refused to compromise along the way laid the blueprints for us to follow. And so now, let he who has watered, be watered. Let he who has given be given to. It is an honor to now know you, to learn from you and join in this work with you.”

He Gave an Encouraging Graduation Speech at Howard University

Boseman, who graduated from Howard University in 2000, gave the 2018 commencement speech at his alma mater. He congratulated students on protesting for what they believed in and told the story of meeting Muhammad Ali on campus, but also shared one of his first rejections in his acting career.

“Once I saw the role I was playing, I found myself conflicted. The role wasn’t necessarily stereotypical. A young man in his formative years with a violent streak pulled into the allure of gang involvement… but I was conflicted because this role seemed to be wrapped up in assumptions about us as Black folk,” Boseman said. “The writing failed to search for specificity, plus there was barely a glimpse of positivity or talent in the character, barely a glimpse of hope. I would have to make something out of nothing. I was conflicted. Howard instilled in me a certain sense of pride, and for my taste, this role didn’t live up to those standards.”

Boseman then continued to say how once he brought up the character’s stereotypical nature, he was let go from the role. Though Boseman does not mention the name of the show at the time, it was later revealed to be “All My Children,” and Boseman’s future “Black Panther” co-star Michael B. Jordan took over the part.

“If you are willing to take the harder way, the more complicated one, the one with more failures than successes, the one that has ultimately proven to have more meaning, more victory, more glory, then you will not regret it,” Boseman said in the conclusion of his speech. “Now, this is your time… Howard Forever.”

He Gave His MTV Movie Award to a Real-Life Hero

After Boseman won the Best Hero award at the June 2018 MTV Movie and TV Awards, he chose to honor one of his personal heroes with his trophy: James Shaw Jr. Just a few months earlier, Shaw Jr. saved lives during a shooting at a Waffle House in Tennessee.

“Receiving an award for playing a superhero is amazing, but it’s even greater to acknowledge the heroes that we have in real life. So, I just want to acknowledge someone who is here today. James Shaw Jr., can you stand?” Boseman said. “If you don’t know James Shaw Jr., he fought off a gunman in Antioch, Tennessee, at a Waffle House. He saved lives… So, this is going to live at your house.”