‘Center Stage’ Cast Reunites to Talk Diversity in Ballet: ‘We Have to Do So Much Better’ 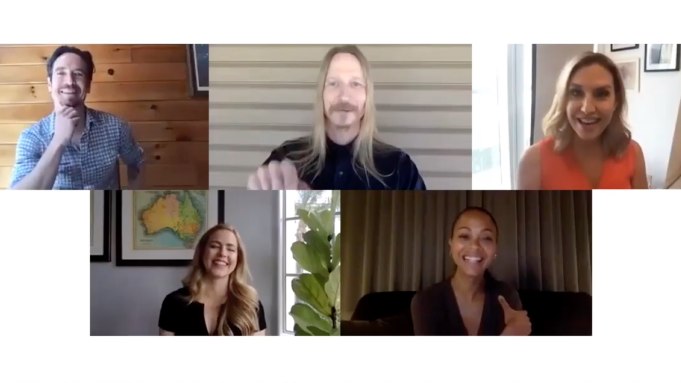 “Center Stage” stars Zoe Saldana, Amanda Schull, Sascha Radetsky and Ethan Stiefel reunited 20 years after the film’s debut to discuss the cultural touchstone and life-changing ballet film. Between port de bras and pas de trois references and stories about driving Harleys across fancy stages, the cast took this moment to reflect on larger issues of representation and diversity in the ballet community.

Joining together to raise funds for the American Ballet Theatre’s Crisis Relief Fund, a charity that provides aid for dancers, production crews, musicians, ballet staff and faculty impacted by cancellations from COVID-19, the cast shared behind-the-scenes stories and fun memories. But then the conversation turned more serious with a thoughtful breakdown about how “Center Stage” helped dispel stereotypes for male dancers and how much work the ballet community still needs to do for better representation.

Over the years, Schull revealed that she is often approached by male dancers in their late teens thanking her for being a part of “Center Stage.”

“Men approach me and say: ‘I was able to explain to my parents why dance was so important and I did it through this movie,'” Schull said. “Or sitting down watching it with them made them realize why this has become such a passion for me, why this ballet is so important to me.'”

Schull continued praising the work of Radetsky and Stiefel on film, “Not everyone understands how powerful male dancing can be. And I think that’s something to see these two beautiful male dancers on film. It really had a strong importance for a lot of inspiring young guys.”

“All of us who are men in the dance world have stories of harassment, just stupid stuff growing up because there’s some stereotypes associated with male dancers,” Radetsky said. “Unfortunately they seem to endure. But, ‘Center Stage’ has been really affective at dispelling some of the stereotypes and opening people’s eyes up to the beauty and power and athleticism and other ineffable virtues of dance, and male dance in particular.”

Stiefel concurred, “As we’ve all discussed because of the people that we were working with on the film, on every level, as someone who, since the age of 8 or 9, was pursuing a ballet career took a great sense of pride in the fact that I was given the chance to present dance on the highest level. And all you can do is present your art form in the best light possible. That’s a huge responsibility and one that I didn’t take lightly, but at the same time if we’re still talking about this film right now 20 years later and some of the topics that we are discussing, it seems it did resonate.”

“Center Stage” was the first project for Marvel’s “Guardians of the Galaxy” and “Avatar” star Saldana. The actress confessed she’d previously only done one small stint on “Law & Order” before this major part. However her passion for dance started at an early age but took a sad turn when she moved to New York at 17 or 18 to pursue a professional career in ballet.

“I was incredibly discouraged with the lack of diversity in the classical form dance,” Saldana said. “So my heart was broken. I feel like that was my first heartbreak. So booking ‘Center Stage’ was a sign from the universe where you get to bid off and say goodbye to a part of my life that had been so fundamental up until that point and say hello to another form about that I was inquisitive about but being so insecure. ‘Center Stage’ sealed that deal.”

Adding to the conversation, “CNN Newsroom” anchor and moderator Poppy Harlow recalled a previous interview with Misty Copeland, the first Black female principal dancer in American Ballet Theatre’s history. In this conversation Copeland stated that the ballet community does not celebrate women of color. She then turned that statement over to the “Center Stage” cast.

“Misty’s right, there isn’t a lot of diversity in ballet,” Schull agreed, acknowledging that she herself fits into the “cookie cutter mold” of what many people think of when they hear “ballet dancer.” “It’s something that ought to be changed,” said Schull.

Saldana agreed, turning back to her earlier story about the despair she felt with a dance community that didn’t reflect the reality of this diverse world. “Representation matters when you’re a child,” Saldana said. “It’s how you can believe that you can be a president, you can save the world, you can find a cure for cancer.”

That being said, Saldana does have hope for the future due to the conversations happening today. “The broken heart is something that is very traumatic, your whole life you carry that,” she said. “But I do believe that it is a conversation that is starting to be had in circles that are more inclusive. I think for so long the matters of inclusively and racial disparity were topics that only people of color or minority communities were having. The more anglo Americans invite themselves and take partnership in the conversation that’s what’s going to bring change. Jody Sawyer’s monologue in the end when Jonathan invites her to join the company, she basically says in other words she could join the company and be a part of the chorus and just wave a little rose back and forth, but she’s better than that. That is a universal theme that every parent tells every child regardless of their gender or color or race or creed. And that was what I always held on to, even though I walked away with a broken heart from an environment that wasn’t representative of what I was, I knew that I was always better than that.”

When asked why the ballet world hasn’t grown, Radetsky urged for policy changes that would address systemic racism before we can see true change without letting the arts community as a whole off the hook: “Those of us in the arts can do so much better and we have to do so much better. We’re in the middle of an urgent and important moment of reflection and conversation about where we failed in the past and where we’re failing now and how we can improve things going forward.”

Watch the full conversation about change and diversity in the ballet community in the video above.